Have the US airlines turned the corner? Impressive PRASM performance for Southwest and United

Southwest, the star performer in improving its unit revenues in recent months, continued to trump JetBlue, US Airways and Continental Airlines in the yield growth stakes in Jan-2010, with double-digit PRASM growth.

In a further positive development with regards to corporate transparency, United Airlines provided two years of PRASM data this month, after previously not reporting its monthly unit revenues. The data shows strong unit revenue growth, with United commenting that “given the significant volatility in the revenue environment in 2009, management believes investors will find the year-over-year comparison to be useful”. (See more below).

But Southwest led the way, providing hopes the US airline industry may have finally turned the corner.

Southwest Airlines stated passenger revenue per ASM for Jan-2010 is estimated to have surged 14-15% in the month - it largest PRASM increase by far in the past 12 months and the fifth consecutive month of PRASM growth for the carrier. The increase built on growth of 6.0% in Jan-2009. 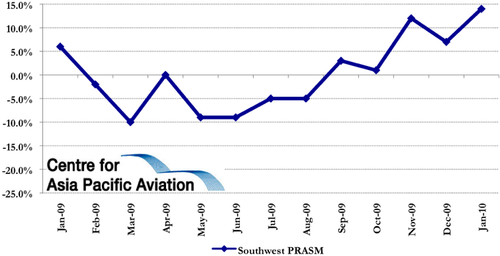 Looking forward, Southwest stated that with “strong revenue and booking trends continuing thus far into 2010, we expect another year-over-year increase in unit revenue for 1Q2010”.

Nine months of PRASM reductions for JetBlue, but reductions narrowing

JetBlue, meanwhile, reported a 2% reduction in PRASM in Jan-2010 (off last year’s positive base of +15%), for nine consecutive months of PRASM reductions. On a 12-month moving average, JetBlue’s PRASM is still deteriorating. 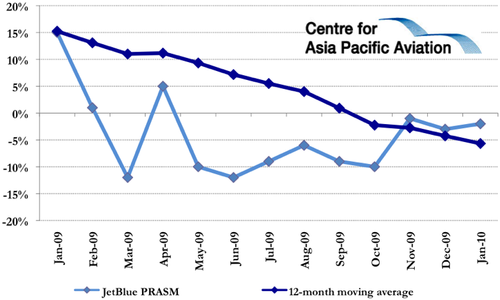 Looking ahead to 2010, JetBlue expects PRASM and RASM to be in the range of down 1-2% in 1Q2010, but some solid improvement thereafter. JetBlue is forecasting PRASM and RASM for the full year to increase in the +5% to +8% range.  (Also among the LCCs, AirTran Airways stated it expects total unit revenue per ASM in 1Q2010 to be up by 2.5% to 3.5%.

United Airlines, meanwhile, reported that consolidated passenger revenue per available seat mile (PRASM) is estimated to have increased 9.5% to 11.5% year-on-year in Jan-2010, for the second consecutive month of improvements and the largest year-on-year rise since Jan-2008. The Jan-2010 surge was preceded by 13 months of contractions, with PRASM down in every quarter of 2009. Consolidated PRASM estimated to have increased 2.0% to 4.0%. 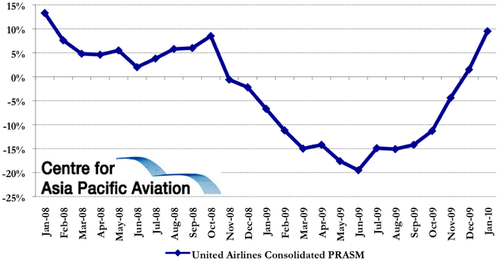 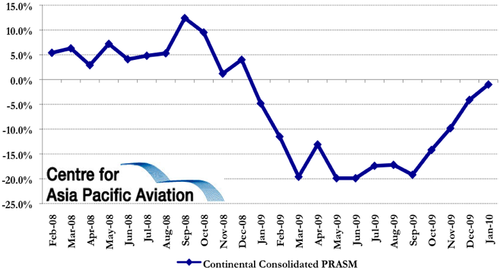 Looking at a two-year range, Continental’s Jan-2010 PRASM decreased 5.8% over Jan-2008 (around when the US entered recession). 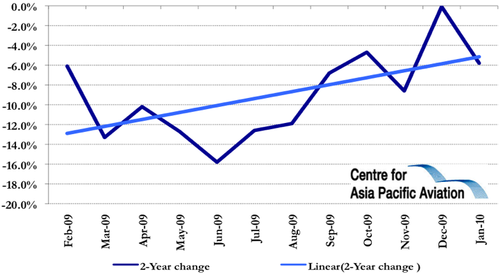 Mr Kirby added that the “encouraging revenue momentum we saw in late 2009 has carried into 2010 in both corporate revenue and booked yields." 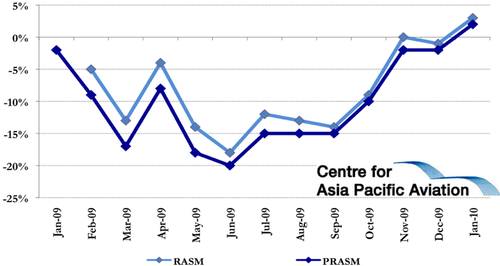 2009 passenger revenue declined 18% for the largest drop on record

2009 was an extremely challenging year for US airlines, with passenger revenue declining 18% year-on-year in the full year, as a result of a 6% reduction in passenger volume and a 13% drop in the average price paid to fly one mile. The decline in passenger revenue from 2008 to 2009 was the largest on record, exceeding the 14% decline observed from 2000 to 2001.

Yields have also strengthened towards the end of 2009. 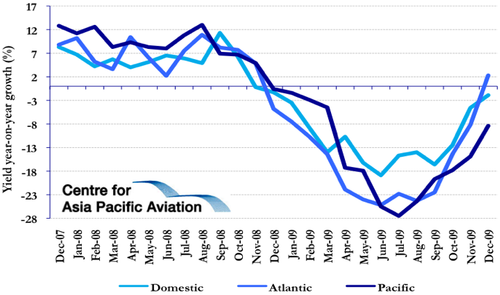 On a 12-month moving average, domestic and Atlantic yields appear to have stabilised, though Pacific yields are still deteriorating. 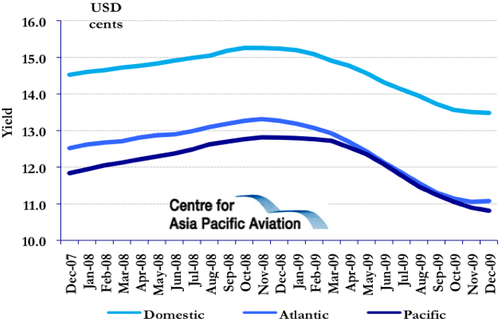 The outlook for 2010 is more optimistic, with ATA President and CEO, James C May, commenting, “the global recession, accompanied by high levels of unemployment, hit air travel demand especially hard in 2009 but the declines appear to be bottoming out. Anecdotal evidence suggests a positive revenue trajectory in 2010”.

Meanwhile, ATA VP and Chief Economist, John Heimlich, in ATA’s 2010 Airline Industry Economic Perspective, commented that many airlines are “reporting a steady upward trend in bookings going into the New Year, including premium seating for business customers”. He added that this is “cause for optimism” after a year that saw US airlines’ yields being severely battered.

Despite signs of improvement, Mr Heimlich warned that it is “important to remember that ‘better than 2009 is not saying a whole lot’ in the grand scheme”.