The improved yield figures occurred as the carrier reduced its promotions, due to “renewed predominance of business trips in August following the end of the July holiday season”. Also in the month, GOL reported a 6.9% increase in traffic (RPKs), on a 4.2% capacity (ASKs) increase, resulting in a 1.4 ppt load factor improvement to a still-low 59.0%. 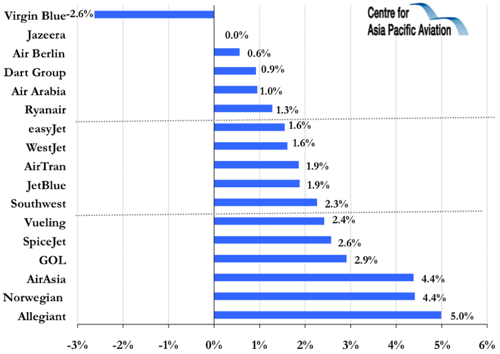 Also in the Americas, JetBlue Airways reported a 4.4% increase in passenger numbers to 2.2 million in Aug-2009, but experienced a 6% reduction in passenger revenue per available seat mile (PRASM) for the month. Southwest reported a similar PRASM contraction in the month (with an estimated reduction of 5-6%) and also experienced a 3.0% reduction in revenue passengers to 7.5 million. See separate report: JetBlue’s PRASM recovery on a better trajectory than Southwest?

Ryanair has meanwhile announced plans to increase its checked and excess baggage fees and to increase the check-in bag allowance from one to two bags, and from 15kg to 30kg, as part of the airline's programme to encourage passengers to travel with carry on luggage only.  The carrier stated the changes “reflect the fact that Ryanair’s average fares have fallen by 20% this year, from EUR40 to EUR32”.

In the Asia Pacific region, AirAsia shares gained on Friday, by 4.4%, on the same day the LCC announced that Kenanga Investment Bank Berhad (KIBB) plans to issue up to 50 million European style non-collateralised cash-settled call warrants over the ordinary shares of USD0.03 (RM0.10)/share in AirAsia.