US LCC stocks rose modestly Monday with the wider market amid indications that Europe's recovery is gaining traction. Meanwhile, Latin American stocks edged up slightly on Monday, with early gains trimmed on investor caution a day ahead of a US Federal Reserve meeting. However, Brazil's Bovespa index was 0.3% weaker, for a second consecutive session of losses.

Shares in GOL slipped 0.9% yesterday, coinciding with the launch of the carrier’s financial results for the three months ended Jun-2010.

Looking forward, GOL is maintaining its guidance for 2010. The carrier, following the conclusion of its operational fleet renovation process, estimates an increase in its operating margins to more than 13% in 2011 and 2012, based on expectations that both the Brazilian economy and air traffic in its operational area will continue to grow.

Southwest Airlines (shares up 1.6%) commenced Federal mediation with its stock clerks in a bid to resolve labour contract negotiations after a tentative agreement between the carrier and the stock clerks, represented by the International Brotherhood of Teamsters, was voted down in 2009. Shares in the carrier gained 1.6% yesterday.

Meanwhile, Frontier Airlines announced plans to relocate its Houston operations from George Bush Intercontinental Airport to William P Hobby Airport on 18-Nov-2010.  The carrier also stated it extended the lease agreement on its Denver-based commercial headquarters through 31-May-2020. Frontier has occupied the Tower Road facility since 2001. 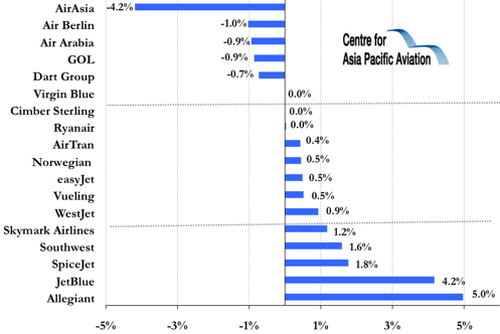