The Peel Group will retain a 35% investment in Peel Airports and a presence on the board and stated it "looks forward to opportunities the strategic partnership with Vancouver Airport Services will generate". Peel Airports owns 100% of LJLA and DSA and 75% of DTVA, with local borough councils owning the remaining 25%. Peel Airports announced that, following the successful completion of the Peel investment process, Mark Whitworth will step down from his role as CEO immediately. Mr Whitworth will assist Vancouver Airport Services in an advisory capacity for up to three months.

Of the listed airports, AdP fell 1%, Fraport was flat and Vienna Airport rose 0.8%. 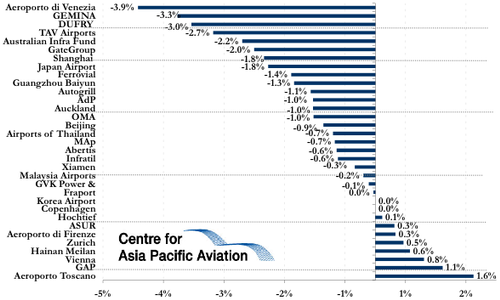