Genesis Lease shares leapt 7.6% in trading on Wednesday, leading a strong day for aircraft lessors, with Air Partner gaining 6.7% and Babcock & Brown Air up 4.2%. Aircastle was more subdued, down 0.3%, while Aercap dropped 1.6% yesterday.

The market outlook for Genesis has been strong, despite a 47% drop in net profit over 1H2009. Since the release if its half-year results, released on 30-Jul-2009, the company's shares have gained more than 25%, trading up more than 11% over the past few days.

The company is confident that its portfolio of new and diversified aircraft will continue to deliver profitability, although it has moved to reduce its exposure to some weaker markets. Forward leasing rates are expected to increase, although the lessor has only one aircraft lease due to expire over the remainder of 2009 and only three scheduled aircraft lease expirations in 2010, indicating the continued strength of the leasing market.

After trading up earlier in the week, major aircraft manufacturers Boeing and EADS (parent of Airbus), were down yesterday. EADS fell 1.6%, while Boeing lost 0.9%. Major news for the US manufacturer is the possibility that its newly acquired South Carolina plant (acquired from Vought for USD1 billion in July) could be expanded as a potential site for the second B787 production and assembly line.

Boeing is not due to make a decision on the second assembly line until the end of the year, or even early 2010, but has requested assistance from South Carolina's commerce secretary to gain regulatory approval for a B787 final assembly plant in the state.

With 850 B787 aircraft on order, and tense relationships between Boeing and its unions at its main Everett facility, Boeing is looking for the first time to set up a production facility outside Washington State. The news places more pressure on unions at Everett, as the plant is also pushing to be the site of the second production line, which is due to go into operation some time in 2012.

Meanwhile, there are more signs the continued cooling of the business jet market is affecting smaller manufacturers. After Bombardier’s cancellations of Jet Republic’s orders for Learjets earlier in the month, Embraer has temporarily closed its Executive Jet Services facility at Bradley International Airport, one of three in the US. The facility, which only opened in Oct-2008, will reopen once deliveries pick up in the US northeast, particularly as Embraer ramps up production of its light jets. However, the closure is a set-back to the company’s USD100 million investment in executive jet centres, with the Bradley facility not expected to come back into operation until 2010. Embraer shares rose 1.7% yesterday. 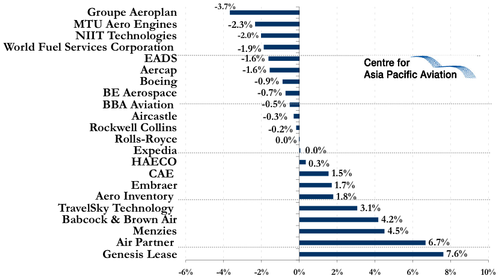