Garuda Indonesia incurred a significantly wider loss in 1Q2014 as its international operation struggled and budget subsidiary Citilink chalked up more losses. Garuda is at an important juncture as it seeks to raise cash to fund continued rapid expansion through a rights issue at the group level and a stake sale at Citilink.

Generating private equity or financial investor interest has been challenging given the difficult market conditions facing the aviation sector in Indonesia and Southeast Asia. But there is interest from potential strategic investors as other Asian airlines are keen to grow their presence in one of the region’s most dynamic and fastest growing markets.

Of all the options, a potential investment from the Singapore Airlines (SIA) Group is most intriguing. Indonesia is an important market for SIA and its low-cost affiliate Tigerair. The SIA and Tigerair investment in Indonesian LCC Mandala has backfired, but Citilink has the scale and market position to potentially be more successful.

Revenues were flat at USD807 million despite a 16% increase in group passenger numbers (includes Garuda and Citilink) to 6.4 million. The group’s yield was down 9%, driven by the depreciation of the Indonesian rupiah, while seat load factor dropped 6.1ppts to only 68.4% 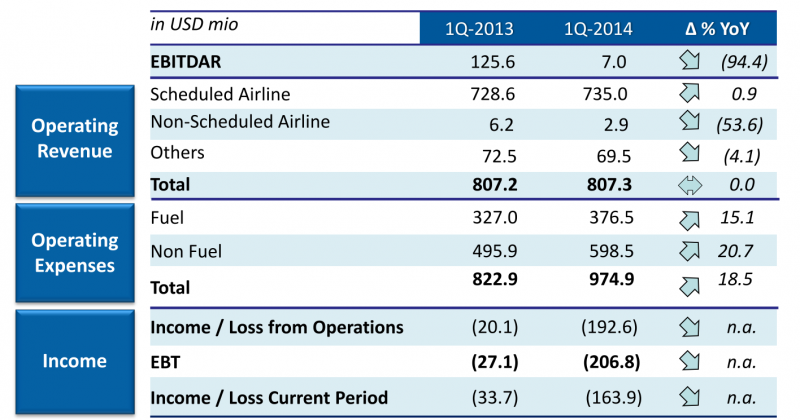 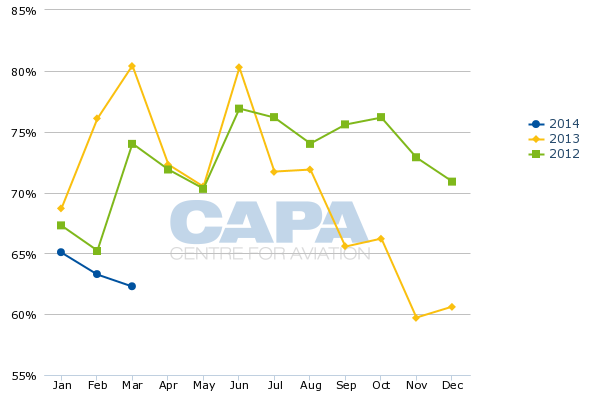 Garuda blamed intensifying competition and USD appreciation for the poor international figures. The carrier stated that Australia, Europe and Saudi Arabia have particularly been weak markets.

The Indonesia-Australia market is suffering from over-capacity as total seats between the two countries has increased by nearly 40% over the last year, according to CAPA and OAG data. Garuda, Jetstar, Virgin Australia and AirAsia have all added capacity. Jetstar has recorded the biggest expansion at 69% year over year, giving it a leading 31% share of seat capacity in the Indonesia-Australia market in May-2014 compared to 24% from Garuda. 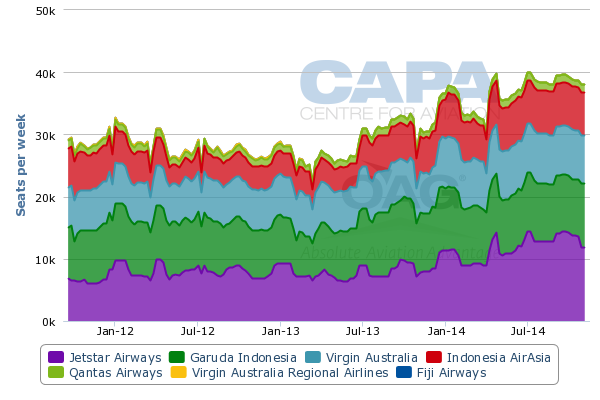 On Indonesia-Europe and Indonesia-Saudi Arabia, Garuda faces intense competition from the major Gulf carriers, all of which now have large operations in Jakarta. Etihad added a second daily flight to Jakarta in Oct-2013 while Qatar increased its Jakarta-Doha service from 11 to 14 weekly frequencies in Sep-2013.

Qatar plans to add four more weekly flights to Jakarta in Jun-2014 for a total of 18 (it also serves Bali with a daily flight via Singapore). Emirates added a third daily flight to Jakarta in Mar-2013 and is now the third largest foreign carrier in Indonesia after SIA and Malaysia Airlines (MAS).

Total seat capacity between Indonesia and the Middle East is up by about 23% over the last year. 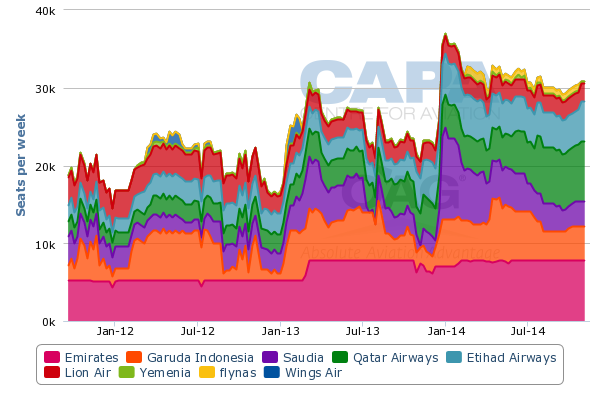 Other Southeast Asian flag carriers, particularly Singapore Airlines and Malaysia Airlines, also compete vigorously in the Indonesia-Europe market. SIA and its full-service regional subsidiary SilkAir have expanded capacity to Indonesia by about 30% over the last year while MAS capacity to Indonesia is up by 37% year over year, according to CAPA and OAG data.

The local Indonesia-Malaysia and Indonesia-Singapore markets are growing but not fast enough to absorb all the additional capacity, prompting SIA/SilkAir and MAS to push connections beyond their hubs to Europe and other international destinations.

Garuda aims to improve its international performance through a series of capacity adjustments, schedule changes and initiatives aimed at leveraging its membership in SkyTeam, which it joined in early Mar-2014. Garuda hopes to improve its highly unprofitable European operation by transitioning on 30-May-2014 its only European destination, Amsterdam, from a one-stop service via Abu Dhabi using A330-200s to a non-stop service using 777-300ERs. Garuda also plans to add from 8-Sep-2014 an Amsterdam-London Gatwick tag to its five times per week Jakarta-Amsterdam service.

The new non-stop route to Amsterdam improves the carrier’s position in Europe as it will be able to offer an exclusive non-stop to Amsterdam, one of Indonesia’s largest European markets because of the historical ties with the Netherlands, and a one-stop product to the rest of Europe by leveraging the Amsterdam hub of SkyTeam partner KLM. But the non-stop service also comes with higher operating costs and risk as Garuda stops utilising its pick up rights at Abu Dhabi. Garuda is entirely pulling out of the UAE market, an indication of the challenges competing with the main Gulf carriers, and will instead entirely rely on a codeshare arrangement with Etihad.

AS CAPA previously analysed, Garuda has dropped prior plans to serve London non-stop as well as add other non-stop destinations in continental Europe using its new fleet of 777-300ERs. While this is a sensible move given the challenging market conditions and intense competition, Garuda continues to take 777-300ERs, which were initially acquired for the European market.

Garuda currently operates four 777-300ERs with another three aircraft due for delivery by the end of 2014 followed by the final three from its 10-aircraft commitment in 2015. Garuda has been using the aircraft primarily on North Asia routes as it has also dropped plans to use the type on Sydney in response to the over-capacity and intense competition in the Indonesia-Australia market. Garuda has particularly been focusing on expanding in Japan, where it sees opportunities for further growth and says that the Indonesia-Japan market shows signs of continued improvement.

While North Asia is the best option as it is not quite as competitive or challenging as the European or Australian markets, the carrier risks creating an over-capacity situation to Japan and potentially other North Asian destinations such as Korea and China. As the 777-300ER fleet expands with no long-haul options, the outlook for improvement in Garuda’s international performance is bleak because the 777-300ER operation comes with a hefty price tag.

Garuda’s strength has traditionally been in the domestic market and until the 777-300ERs, its new flagship and only aircraft in three-class configuration, began arriving in mid-2013 the carrier had been expanding much faster in the domestic market. Of Garuda’s 4.9 million mainline passengers in 1Q2014, 81% were domestic while only 19% or about 900,000 were international. (When also including Citilink, only 14% of total Garuda group passengers were international in 1Q2014.)

Garuda’s domestic mainline RPKs were up 14% on a 17% increase in ASKs, resulting in a 2.4ppts drop in seat load factor to 71.4%. Domestic yields in USD terms were down 13% – again driven by the depreciation of the Indonesian rupiah (domestic yield in IDR terms was up 6%). 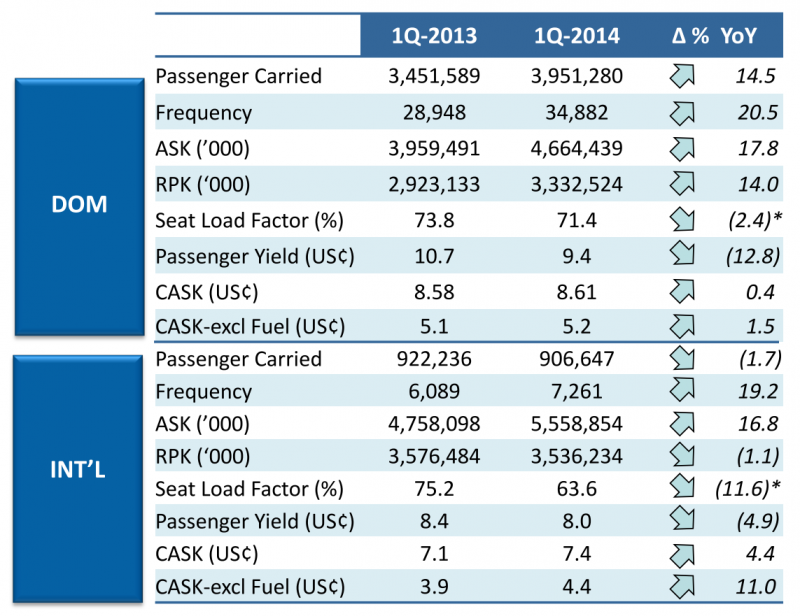 Indonesia is now the world’s fifth largest domestic market. As the largest full-service carrier and the only IATA member in Indonesia, Garuda is well positioned domestically. Local domestic demand continues to grow, including at the top end of the market, as does demand for domestic connections throughout the vast country for foreign carriers serving Indonesia.

Garuda could forge strategic partnership with another airline group

Internationally is where Garuda faces the biggest risks. While it has ambitions to pursue rapid expansion in the international market, its membership in SkyTeam enables the carrier to focus primarily on the domestic and regional international market while using partnership to expand its long-haul network virtually. Garuda is also keen to work with carriers outside SkyTeam as is evident in its new codeshare partnership with Japan’s All Nippon Airways, which was implemented at the end of Mar-2014.

The option of a strategic partnership is also now on the table as part of a rights issue. Garuda has been looking to raise about USD130 million to fund fleet expansion as part of a rights issue that was launched in Apr-2014 and involves the sale of about a 12% stake. The government is keen to reduce its stake from 69% to 60% as new shares are issued.

So far interest from potential financial investors has been lukewarm as challenging market conditions in Indonesia and Southeast Asia have created a generally rather unfavourable investment environment for airlines. But there is interest from potential strategic investors as several airline groups are keen to expand their presence in Indonesia. Potential airline investors include ANA, SIA and Air France-KLM.

While Japan-Indonesia economic ties are growing and the SkyTeam factor should not be played down with Air France-KLM, SIA is the most intriguing scenario given that Indonesia is on Singapore’s doorstep. Indonesia has become SIA Group’s second largest market after Australia – hence it is of even more strategic importance than slower growing China, and India where SIA is establishing a joint venture carrier with Indian conglomerate Tata. SIA has been interested for several years in making an investment in China but the current political environment makes such a move extremely unlikely in the short term while Indonesia is relatively feasible.

An equity tie-up between Garuda and SIA may be hard to fathom as much of Garuda’s (and Indonesia’s) long-term international strategy has been aimed at winning back passengers that now fly to Europe and other long-haul destinations via Singapore. But current market conditions dictate a re-think.

Garuda has already significantly toned down its ambitions for Europe and is now content with just the one European route to Amsterdam with continuing service to London. Garuda will remain predominately a domestic carrier with some growth in point to point international services, particularly Bali to North Asia.

Given its huge local market and infrastructure constraints, Jakarta is unlikely to emerge as a large international hub airport. As a result the prospect of competing with Singapore Changi is perhaps overplayed. Greater cooperation between Garuda and SIA/SilkAir – they already have a limited codeshare covering secondary routes between Singapore and Indonesia but not on Singapore-Jakarta or any beyond routes – could be a win-win as the overlap is potentially manageable.

The reality is Garuda could use the cash and could gain from a knowledgeable strategic investor. This is particularly important given the lack of a clear succession plan following the Mar-2015 mandatory exit of highly respected CEO Emirsyah Satar.

Garuda is also now seeking to sell about a 40% stake in Citilink, with the proceeds needed to fund the LCC’s continued rapid expansion. The stake sale initially generated bids in Mar-2014 from four parties – two private equity firms and two airline groups. Garuda has said negotiations are now down to just two parties. It is believed both are airline groups, providing a further indication of the challenging environment facing Southeast Asian carriers in securing new capital from the financial sector.

SIA already has an indirect stake in Indonesian LCC Tigerair Mandala, which is 40% owned by the Tigerair Group (which in turn is 40% owned by SIA). But Tigerair Mandala has been struggling and its two main shareholders have been looking at selling the carrier. Citilink would be a logical suitor and could potentially fund the acquisition and integration using some of the funds from the stake sale.

With Tigerair Mandala’s operation now whittled down to only 10 routes and four active A320s, it has become an insignificant player in Indonesia and an insignificant contributor to the Tigerair and SIA Group strategies for Indonesia. Citilink offers an entirely different scale. With an A320 fleet of 24 aircraft expanding to 32 by the end of 2014, Citilink will soon be larger than Tigerair Singapore. While the Singapore budget market is approaching maturity, there are still huge opportunities for growth in Indonesia.

Citilink, however, could use help – both financial and in terms of LCC expertise. Indonesia’s market has become intensely competitive and challenging, with the devaluation of the rupiah putting a dent in Citilink’s prospects for a turnaround. 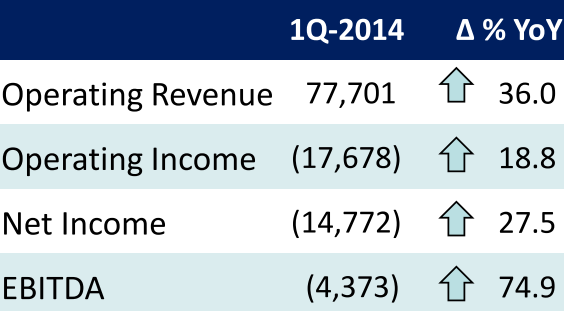 Turning around Citilink in a market showing signs of over-capacity and dominated by Lion Air will be challenging. By looking for a strategic investor with LCC experience, Garuda recognises this is a battle it is best off not waging alone. While other groups such as AirAsia could also be interested in Citilink, investment from the SIA Group would lead to a fascinating combination with far-reaching implications.

The Garuda Group is fast approaching a critical juncture. Garuda’s accomplishments under Mr Satar has been impressive as the carrier has come back from near oblivion, completed an initial public offering and joined a global alliance. But as Mr Satar works through his 10th and (as required by Indonesian law) last year in office, some of his biggest strategic decisions yet are in the offing.