US trade policy whiplash and rising oil prices are combining to create looming uncertainty for US airlines even as demand and revenue trends remain solid. Delta Air Lines is the first US carrier to come forward and revise its 2Q2018 EPS forecast downward; the company also plans to examine its capacity forecast for the US autumn period through the lens of rising fuel costs and a still-strong demand environment.

It remains to be seen how growing trade tensions between the US and Canada, Mexico and Europe will affect both US and global air travel demand later in the year. IATA has warned airlines could be affected by a protectionist agenda while revising its forecast for global airline profitability downward.

With profits falling, oil prices rising and continuing geopolitical uncertainty, US airlines may find it necessary to revisit their capacity growth targets for 2018 after most of the country’s airlines have initially planned solid year-on-year growth this year. And even as higher fuel costs generally lead to fare increases, there is a lag time for that correlation to set in.

At its recent AGM, IATA revised its global profit forecast for 2018 from USD38.4 billion to USD33.8 billion.  The association also projects the full year average of Brent Crude to rise to USD70 per barrel versus a previous forecast of USD60.

IATA also believes airlines are at risks from “the advancement of political forces pushing a protectionist agenda, uncertainty following the US withdrawal from the Iran nuclear deal, lack of clarity on the impact of Brexit, numerous ongoing trade discussions and continuing geopolitical conflicts”.

The US has instituted tariffs on steel (25%) and aluminum  (10%) imports from its allies including Canada, Mexico and the European Union.  All of those entities have plans to retaliate with their own tariffs totaling billions of dollars.

US airlines have had to monitor dizzying movements in US trade policy for months, starting with President Trump’s decision to impose tariffs on certain Chinese imports.  The tariffs on the EU are occurring as the trans-Atlantic is set to become one of the best performing geographical entities for American, Delta and United in 1H2018.

After the US opted to levy tariffs on certain Chinese goods, the largest US airlines appeared to maintain their positive outlooks on demand trends. United’s corporate revenues were up 9% year-on-year in 1Q2018 led by gains in the energy sector. Houston Intercontinental is United’s second largest hub measured by departing frequencies, and the oil industry is a huge driver of Houston’s economy.

At the end of 1Q2018, United believed its favourable growth in the corporate sector would continue as premium cabin sales were robust in its international geographies.

Delta Air Lines at the start of 2018 remarked its latest survey of corporate travel managers showed more than 88% projected their spend would be maintained or increase for the year, which was the most positive outlook the airline had seen in three years.

At the end of 1Q2018, American, Delta and United all had favourable unit revenue forecasts for 2Q2018, and Delta has recently upped its total unit revenue guidance from a 3% to 5% increase year-on-year to growth of 4% to 5%.

Delta has assured that even in the face of rising oil prices, revenue and demand remain strong across all geographical entities in both leisure and corporate passenger segments. However, the airline has stressed even though it can recapture the increases in fuel costs through revenue generation, “fuel prices are highly correlated over the long term with a 6-12 month lag”.

Despite the rapid rise in fuel prices during 2018 – American expects a USD2.3 billion jump in its fuel bill this year – the three large global US airlines were not indicating they had plans to adjust their capacity growth targets for the year.

American, United and Delta 2017 capacity growth and projections for 2018

But now Delta is stating that decisions on its capacity plans for the autumn should be made during the next month, which means the airline could offer a revised forecast during its 2Q2018 earnings results. The airline stated it was evaluating its capacity growth for autumn 2018 in light of rising fuel costs, but still strong demand. Data from CAPA and OAG show US domestic ASKs are forecasted to be elevated through mid Nov-2018. 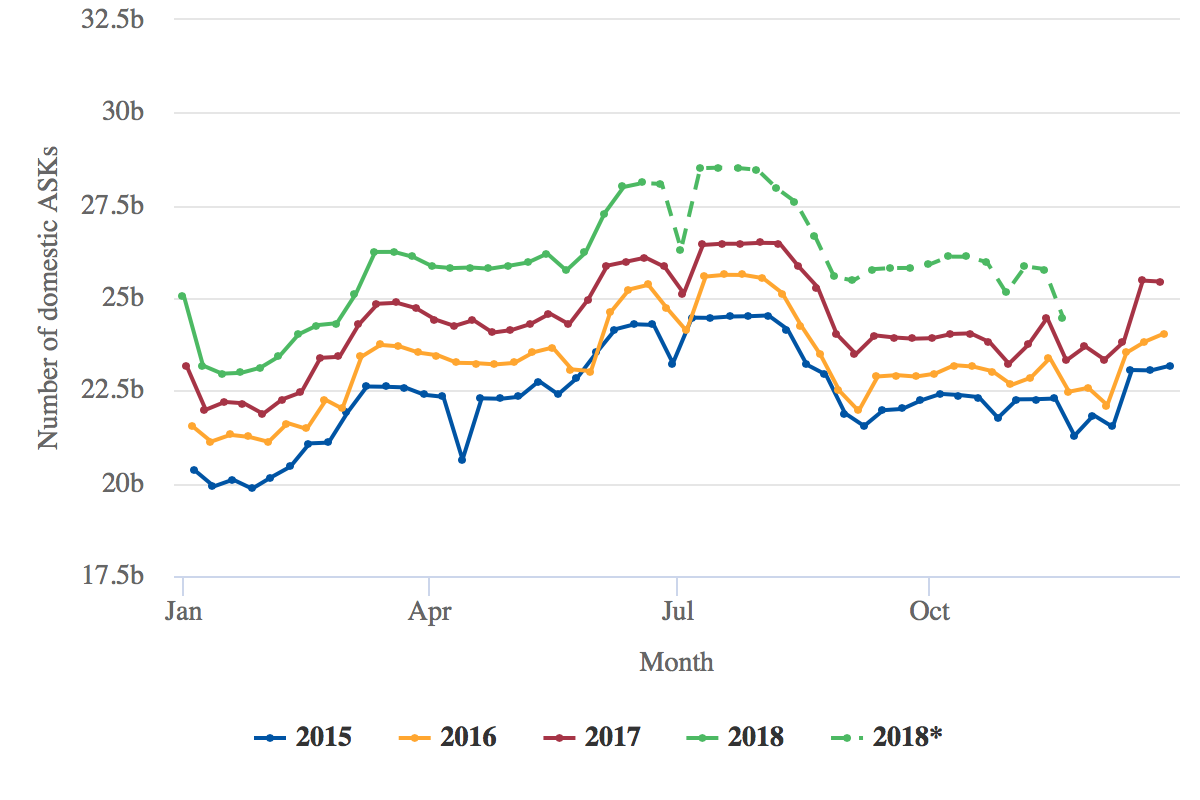 Previously, American has concluded that if the steady-state rise in fuel costs continues, “you’ll see less capacity growth than people are talking about right now”.

After IATA revised its 2018 profitability projections downward for 2018 it was no surprise that one of the world’s largest airlines, Delta, issued a downward revision to profit forecast for 2Q2018.

Despite the bullishness US airlines have about demand and revenue trends, geopolitical uncertainty and rising fuel costs are going to drive those companies to revisit their capacity plans for 4Q2018 in order to ensure an optimal supply-demand balance to sustain solid profitability.