Southwest Airlines’ first quarter profit made a dramatic swing from a net loss of USD91 million in the first quarter of 2009 to a USD11 million profit, a remarkable turnaround for the carrier. 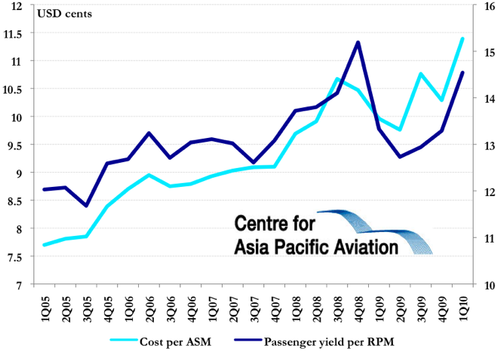 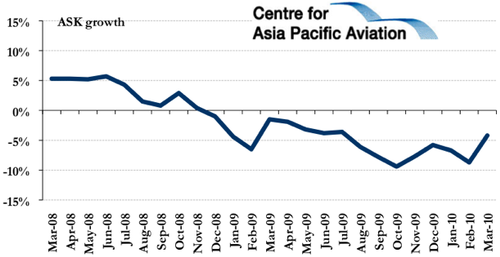 "We are extremely pleased to report a profitable start to the year, especially in this challenging economic environment exacerbated by persistently high energy costs,” said CEO Gary C. Kelly. “As the quarter progressed, we began to see modest improvement in demand for business travel, as measured by the increase in full-fare traffic. Overall demand remained strong, resulting in a record first quarter performance for load factor, passenger yield, and passenger revenues.

Furthermore, first quarter 2010 operating unit revenues, and the corresponding 19.3% year-over-year increase, represent all-time quarterly records. To achieve this revenue performance in, seasonally, the weakest quarter, is notable. To do so in a recovering economic environment is truly remarkable. Thus far, strong load factor and yield trends have continued in April and, assuming trends continue, we expect another significant year-over-year unit revenue gain in second quarter 2010.”

Mergers - not priority, but labour not the problem

Clearly the low-cost carriers are not thinking about consolidation in their ranks. Southwest echoed AirTran in remaining focused on improving financial performance. In addition, legacy carrier Alaska concurred.

Chair and CEO Gary Kelly said that push back from labor – which occurred in Southwest attempt to buy Frontier last year – would not necessarily forestall a deal. However, he added that it is tough to talk about in theory. “We’ve got a great culture and brand and tremendous opportunity than can come in the form of organic growth,” he said. “Clearly we need to be open minded but that is nothing new. We have acquired two airlines in our history.”

Kelly added that Southwest was happy with the WestJet jump to Delta. “We never wanted more than one or two codeshares,” he explained. “Putting two on at the same time added a level of complexity so we are happy to be just working with Volaris. We are on track with our IT development. We want our codeshare partners to be more tactical in terms of where we go internationals rather than strategic.

"If we find another codeshare partner we could be open to that but it is not anything we are actively pursuing. But we solely want to focus codesharing on where we don’t want to go such as the international markets although we may want to fly internationally someday. We just think we can serve the market better.”

Mr Kelly cited the carrier’s network optimisation, revenue management and customer service enhancement efforts continue for the quarterly results, saying they contributed significantly to this industry-leading revenue performance. "We have made great progress on numerous strategic revenue initiatives, and work continues on enhancements to our frequent flyer, southwest.com, and revenue management systems,” he said.

He reported record low factor and said yields were up 9.1% which, he said, “is bucking the normal trend,” especially for the first quarter. Mr Kelly also noted that the company set records with unit revenues up 25% from 2007 and 19% from last year. “The trends are strengthening,” he said, adding he was stunned at the strength of bookings in the Panama City market which launches in June as part of a deal with the St. Joe Company. “That market has very little air service and no history with the new airport.”

Kelly called Panama City a fun exercise. “We’ve been in an environment where we have not wanted to take any risks and Panama City would otherwise be a significant risk,” he said. “But we think we are going to do very well. One of our problems is the air service in Northwest Florida has a handful of airports which splits the market. There is Mobile, Pensacola, Fort Walton Beach and then Panama City. But we think we’ll do well. The Southwest brand is strong, the network is strong and we’ve not for nonstop markets with two daily departures each. I’ve been stunned by the response because there was no way to know and now it looks as if it will be a great success. We don’t know where the bookings are coming from. I think the area has 15 million visitors by car and the game is to get them out of their minivans and on to Southwest. We don’t need very many to fill up eight flights.”

He called Denver the company’s star hub. “It’s incredible RASM is up 20% in the market. Traffic is up over 20% and we’re adding capacity at the same time and that is just one example of how we are driving revenues.”

"As part of our continual efforts to adapt to dramatically higher energy prices, we remain focused on improving productivity to combat cost pressures, with a three percent reduction in headcount per aircraft over first quarter last year," said Kelly. "We anticipate year-over-year nonfuel cost pressures will be more in the first half of 2010, but should ebb, somewhat, in the second half of the year with modest capacity additions.”

The result was an operating margin of +2.1%. 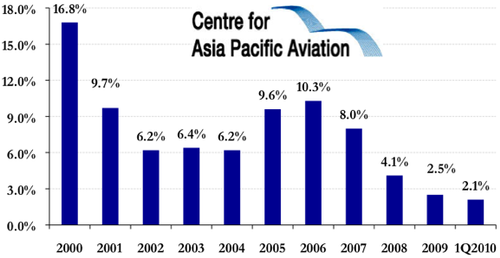 In addition to a fully available, unsecured, revolving credit facility of USD600 million, the company currently has approximately USD3 billion in cash and short-term investments.

Southwest is quietly be getting back on track.