Frontier Airlines, a wholly owned subsidiary of Republic Airways Holdings, announced details of its fleet optimisation plan for 2011, under which the carrier will make “changes to its fleet that continue its strategy of operating the most cost-effective aircraft”.

Effective Sep-2010, the carrier will remove four 120-seat A318s and one 76-seat E170 aircraft from scheduled service (three of these aircraft have been sold to third parties and two will be returned to lessors) ahead of the delivery of the first of six new 162-seat A320 aircraft from Jan-2011. All six aircraft have firm lease financing arranged and will be arriving during 1H2011.

The carrier stated the new A320s would provide the carrier with a net capacity increase and a reduction in unit costs.

Elsewhere in the US, shares in Southwest and JetBlue were both weaker yesterday, slipping 1.1% and 0.2%, while shares in AirTran remained unchanged and Allegiant gained 1.4%. 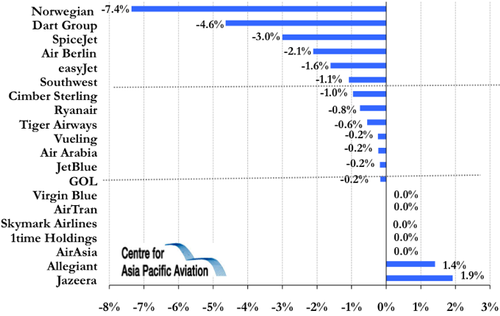