The future of Lufthansa’s stake in bmi is still being contended, with UK LCC, Flybe, joining the growing list of candidates for the takeover, including British Airways and Virgin Atlantic. Lufthansa reported in early Sep-2009 that it had received interest from 12 potential buyers for the sale of bmi, in which it holds an 80% stake.

Shares in Lufthansa were down 3.0% on Friday, while British Airways lost 2.9%.

Austrian Airlines announced plans to cut up to 500 more jobs than previously planned, as part of efforts to reduce the workforce to approximately 6,000 by the end of 2009. The carrier stated the additional reductions would likely be felt "across the board." The carrier is also in discussions with suppliers to negotiate lower prices, with agreements being reached with caterer, Do&Co, and Vienna Airport. Shares in Austrian dipped 1.6% on Friday. 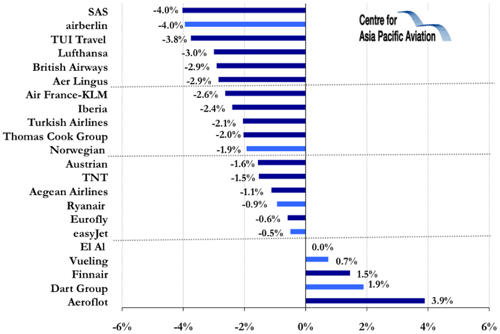