Flybe: back in the black, but cost transformation is still needed

After three years of widening full year losses, Flybe has reported a return to pre-tax profits in 1HFY2014. The Group’s new CEO Saad Hammad joined in Aug-2013, when long-serving CEO and Chairman Jim French became non-executive Chairman. The break with the past was completed on 5-Nov-2013, when Mr French was replaced as Chairman by Simon Laffin, whose experience includes real estate, retail, media and financial services.

Mr Hammad, a former CCO at easyJet and non-executive director at Air Berlin plc, has immediately increased the targeted benefits under the Group’s restructuring plan, recognising that its previous goals would not be enough. In terms of market presence, Flybe has a strong niche in UK regional markets and a small, but growing, foothold in contract flying in mainland Europe.

However, its cost base remains uncompetitive and Mr Hammad may need to drive out even more cost if he is to realise his aim to make Flybe “the best local airline in Europe”.

In 1HFY2014 (Apr to Sep-2013), Flybe recorded a pre-tax profit of GBP13.8 million, turning around a loss of GBP1.6 million in the same period a year earlier. (Excluding the group’s share of the Flybe Finland JV, last year’s result was a profit of GBP0.8 million.) This year’s result included GBP4.1 million of restructuring and surplus capacity costs. Group revenues grew by 3.0% to GBP351 million, with revenue under Flybe management (i.e. including the revenues of the contract flying business) growing 20% to GBP477 million. 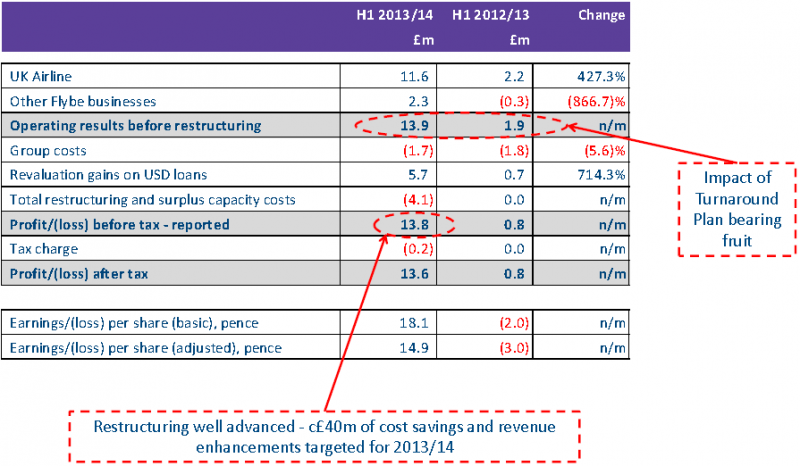 Balance sheet improves, but far from strong yet

The Group’s balance sheet has benefited from disposals of aircraft and slots, so that net debt fell from GBP66 million at Mar-2013 to GBP34 million at Sep-2013.

However, the gross cash balance of GBP64 million is equivalent to only a little more than one month of revenues and it includes GBP45 million of restricted cash. Moreover, adjusted net debt (which includes capitalised operating leases at eight times annual rental payments) was around GBP680 million at Sep-2013, a very high figure compared with GBP50 million of equity. 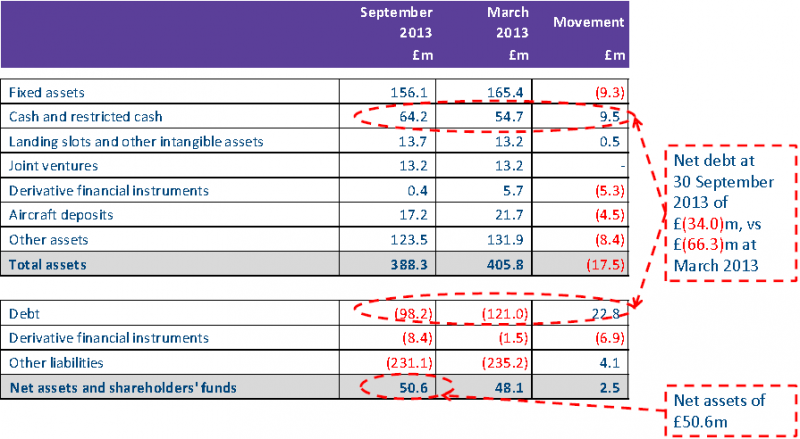 In the group’s main business, Flybe UK, revenues grew by 1.3% in 1HFY2014 and pre-tax profit reached GBP14.2 million, nearly five times the result from the same period a year earlier. This result included GBP3.1 million of restructuring and surplus capacity costs. Before restructuring, costs ex fuel per seat fell by 2.2%, or by 3.9% at constant exchange rates. The biggest contribution to reduced costs ex fuel per seat came from a 20% headcount reduction resulting from the turnaround plan. 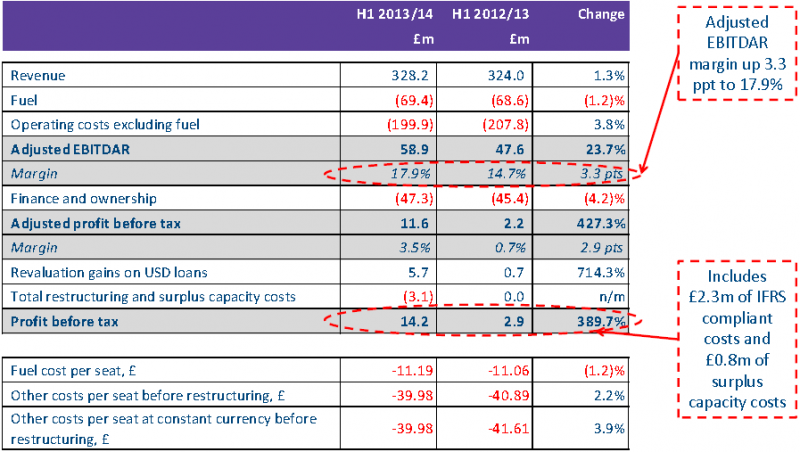 Flybe UK saw passenger numbers grow by 5.6% to 4.3 million on stable seat capacity, with load factor up by 3.6ppts to 68.6%. This load factor gain is welcome, but still leaves significant room for further improvement. Passenger revenues were up by less than 1% and passenger yield (average revenue per passenger) fell by 4.5% to GBP73.36.

Other revenues grew by 16% to reach 4.8% of the total, a relatively low share for ancillary revenues compared with carriers such as easyJet. Total passenger revenue per seat increased by 0.9% to GBP50.35. 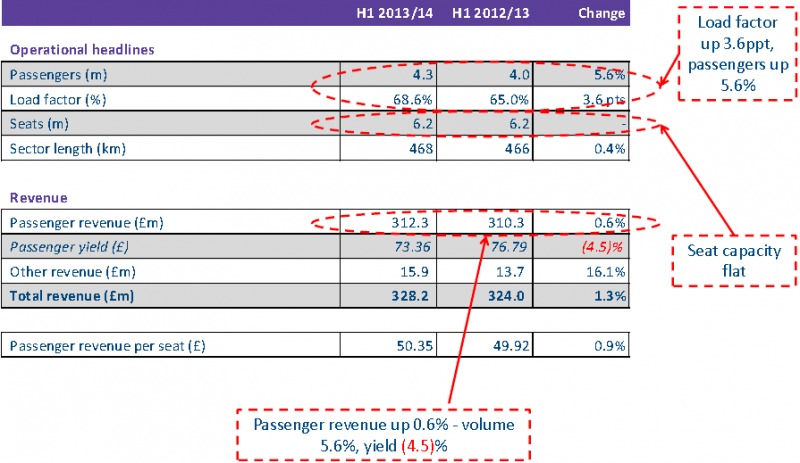 Flybe Finland, the group’s contract flying business on behalf of Finnair, saw revenues more than double in 1HFY2014 to GBP126 million. Its pre-tax result moved to just ahead of a breakeven position (GBP0.4 million, from a loss of GBP4.5 million last year). After central management costs and interest received, Flybe’s share of the JV result was at breakeven. 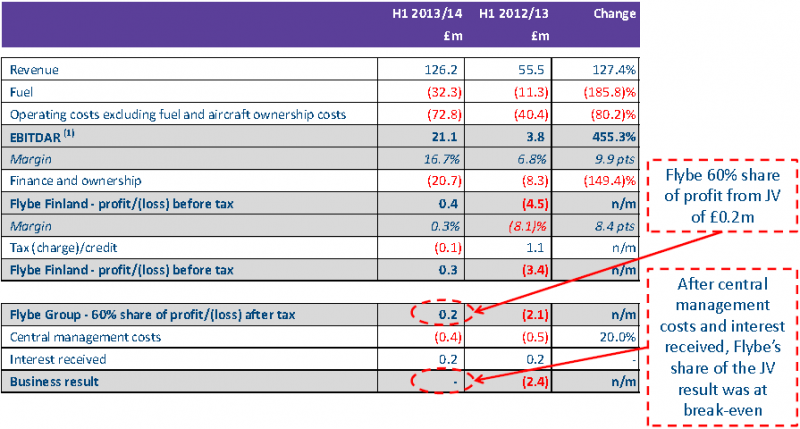 In 2012, Flybe had a 6% share of total UK passengers. Its share in the UK regions (i.e. excluding the London market) was higher, at 12% and its share of domestic passengers was 26%. Focusing on the regions, its share of the domestic market outside London was 47%.

Flybe’s UK regional niche is further highlighted by its share of frequencies at a number of regional airports. It is the leading airline, by share of frequency, at Southampton, Exeter, Belfast City, Birmingham and Manchester; and number two at Glasgow and Edinburgh. This regional strength in the domestic market gives it a solid base, but which has not led it to strong profitability. 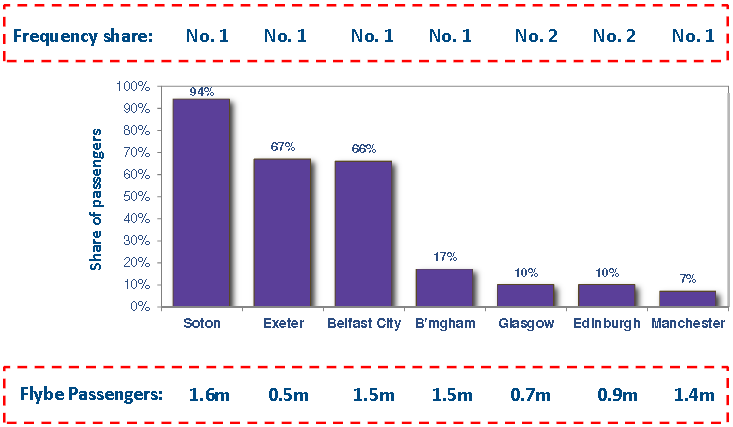 A key reason for Flybe’s underperformance on profitability is its high unit costs. As CAPA noted in a report on 25-Jun-2013, Flybe has a unit cost disadvantage relative to the LCCs that are increasingly important at many of the airports from which it operates.

See related report: Flybe: not yet "Fit to Compete", but the exercise regime has started

In his presentation to analysts on the 1H results, new Flybe CEO Saad Hammad confronted this issue by showing a slide that highlighted Flybe’s high cost per ASK relative to a number of other airlines (see chart below). Flybe has a shorter average sector length than most competitors, but, even allowing for this, its CASK looks high.

Even after both phases of its restructuring programme, this CASK disadvantage will remain. Mr Hammad sees this as a big opportunity for Flybe, although it is not yet clear how he plans to close the gap, let alone eliminate/reverse it. 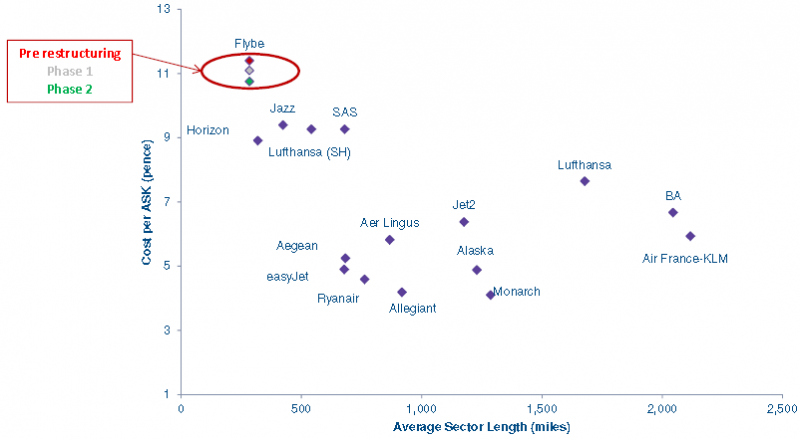 Low fleet utilisation, at 5.3 hours, also holds the airline back

A further opportunity for Flybe, identified by Mr Hammad, is Flybe’s relatively low fleet utilisation. Its overall utilisation of 5.3 hours per day puts it in the middle of the pack compared with a number of other airlines analysed by Flybe, but behind significant competitors with a strong UK presence such as easyJet, Ryanair and Monarch. To some extent, this reflects Flybe’s shorter average sector lengths, but it also suggests scope for improvement.

Aircraft utilisation and aircraft age for Flybe and benchmark airlines: 2012/13 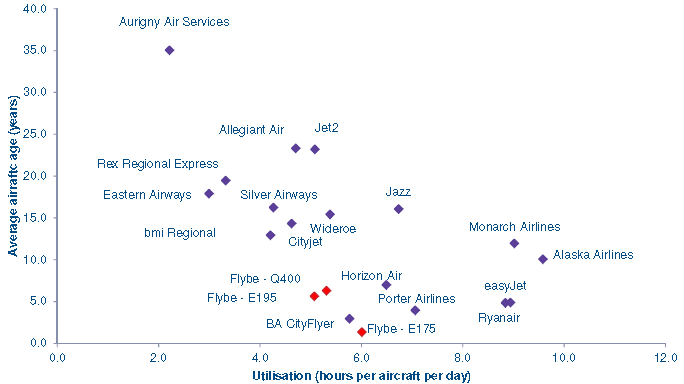 Previous CAPA analysis has also identified Flybe’s low labour productivity. Mr Hammad also acknowledged the scope for improvement here by highlighting the fact that its pilots flew the lowest number of hours on average in 2011.

Flybe operates shorter sectors than other UK airlines – on average around one hour – but there is no correlation between this and average pilot hours. 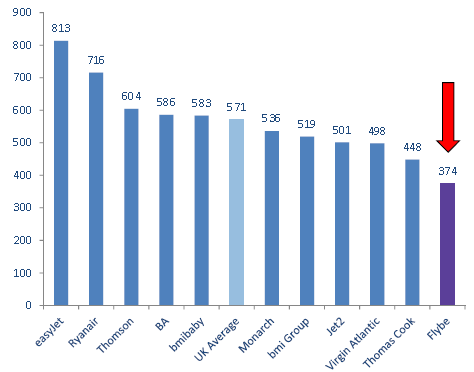 '…simply need to do more and to do it immediately'

However, after joining Flybe in Aug-2013, the new CEO quickly realised that the restructuring programme would not be enough. Mr Hammad concluded that: “We simply needed to do more and to do it immediately”. He has now identified three areas of immediate action in the UK business in order to add to the restructuring benefits targeted. 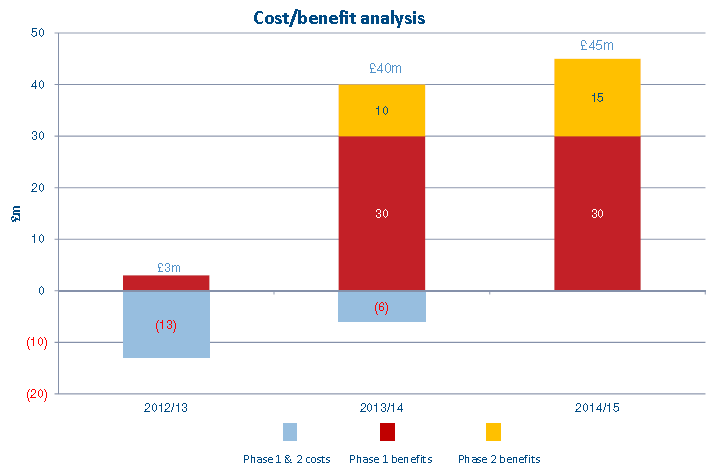 Three immediate actions are to be taken

These three immediate actions are 1) to optimise configuration, 2) to reduce costs further, and 3) to improve commercialisation.

To reduce costs further, the organisation has been simplified into a single management structure and a streamlined senior management team is now in place. A further review of all aspects of the business is under way with a view to identifying further savings.

Consultations with unions and employees over a proposed additional redundancy programme, involving around 500 posts, are also under way. Management is also engaging with key suppliers, including manufacturers, lessors and airports, over further cost reductions.

The improvement of commercialisation comprises a number of initiatives. These include plans to optimise pricing and revenue management; to refocus network development; to strengthen route management; to make changes to marketing; and to develop trading partnerships.

Although the Finnair joint venture is now profitable, Mr Hammad is also aiming to achieve further improvements through operational performance, the reduction of scheduled risk flying losses and the adoption of ‘lean manufacturing’ techniques. 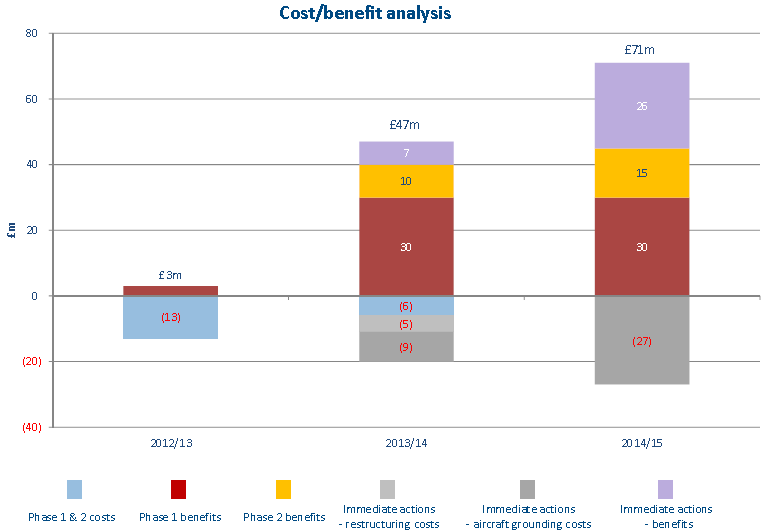 Medium term goal: to be 'the best local airline in Europe'

In the medium term, once he has ‘fixed’ the UK operation, Mr Hammad hopes to grow the business in both the UK and mainland Europe. UK growth will consist of new routes at existing cities and new ‘focus’ cities at key points of connectivity.

Flybe expects to take advantage of anticipated further consolidation of the regional market. In mainland Europe, growth plans will focus both on what Mr Hammad calls ‘white label’ expansion based on the Finland JV contract flying model, and the development of branded operations.

Flybe’s medium term goal is now to make Flybe “the best local airline in Europe”. According to Mr Hammad, this is “ambitious, but achievable provided that we can transform our cost base and efficiency now.”

Transformation of the cost base remains paramount

It is clear that Flybe must transform its cost base in order to survive, let alone to become “the best local airline in Europe” (whatever that means).

The permanent reduction of the FY2013 cost base by the new target of GBP71 million would still leave Flybe with a CASK in the region of GBP10 pence (based on FY2013 ASKs). This would represent a significant reduction from the reported FY2013 figure of around GBP11.60.

However, it does not represent a transformation of the cost base, particularly by comparison with benchmark LCC airlines. While it is true that many of Flybe’s markets demand higher frequencies and smaller aircraft than the big LCCs could supply, this should not deter Flybe from seeking such a transformation. Indeed it will be vital to its future profitability.