The majority of North and South American carriers’ stocks slipped on Thursday (22-Sep-09), following a weaker than expected decline in Aug-2009 home sales. The AMEX Airline Index (-0.1%) ended trading slightly down, marginally better than the Dow (-0.4%), despite another massive fall in oil prices (-4.5%), to USD65.89.

Fitch Ratings warned during trading that despite early indications of stabilisation in the US airline industry operating environment, the sector remains fragile and highly sensitive to changes in air travel demand and the price of jet fuel.

Following a period of extreme revenue pressure over the past 12 months, US carriers are entering Autumn 2009 with "growing expectations that still-tentative signs of stabilisation in revenue trends may pave the way for modest improvement in credit fundamentals and reduced bankruptcy risks moving into 2010". Fitch believes modest improvements in industry profit margins, cash flow and liquidity are more likely over the next year.

Fitch expects the strength of the global economic recovery and the pace of improvement in Business travel will be driving forces. Furthermore, Fitch analyst, Bill Warlick stated “over the next economic cycle, sustained improvements in airline credit fundamentals will depend upon further progress toward industry consolidation, as this provides carriers with the best opportunity to generate pricing power."

Fitch’s ratings for US carriers are as follows:

UBS AG boosted its ratings of American Airlines (-0.5%), United Airlines (+1.2%), Continental Airlines (-0.7%), US Airways (+8.6%) and Alaska Airlines (-1.9%) from “neutral” to “buy” on Thursday, due to improved outlooks for the carriers’ stocks, a “modest” improvement in unit revenue and demand and lowered risk of bankruptcy.

US Airways (+8.6%) meanwhile rallied, following news on Wednesday that it has amended its credit card agreement with provider, Barclays Bank Delaware (BCS), lowering the carrier’s required unrestricted cash balance to USD1.35 billion from a previous USD1.5 billion for Aug-2009 to Oct-2009. Its stocks were also boosted from plans to sell 26.3 million of its common stock to Citi, as underwriter in the public offering of those shares. 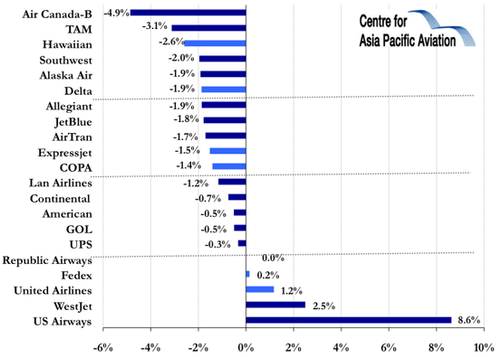