Finnair (+6.5%) and British Airways were the biggest improvers yesterday, despite a merely steady - but uncertain - day on European share markets.

Finnair appeared to be viewed more positively as it announced the introduction of some new seasonal frequencies, linking the US with its European and Asian markets.

Air Berlin (-4.4%) lost some of its previous gains - related to the carrier's negotiations with TUI Travel over a joint cross shareholding arrangement to improve the carriers' position in the German market. 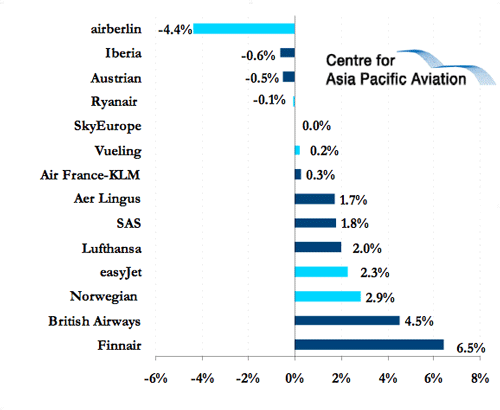 Finnair's announcement of the increased frequency for the Jun-2009 to Sep-2009 peak season on New York services expressly links the trans-Atlantic route with the carrier's Asian network, most notably Tokyo

"Finnair will add three return flights per week on the Helsinki-New York JFKroute during the peak travel period June to September.

"The new flights will for the first time connect Finnair's Asian route network with the US, creating fast connections via Helsinki from Asian cities to New York and back, says Finnair's VP Network Strategy and Traffic Planning Petteri
Kostermaa.

"Finnair flight AY007 will depart from Helsinki on Wednesdays, Fridays and Sundays at 17:10, connecting with flights from Beijing, Delhi, Hong Kong, Nagoya, Osaka, Seoul, Shanghai and Tokyo. The flights arrive in JFK at18:05 local time. The return flight AY008 will depart from New York JFK airport at
22:40 and will connect with the same Asian cities on arrival in Helsinki the following afternoon at 13:50.

"The departure time from New York at 22:40 is ideal for those wishing to work a full day in New York before flying to Europe or Asia.

"Finnair will fly a total of 10 weekly flights between New York and Helsinki in summer.

Finnair to add flights to Tokyo for the summer season

"Finnair will add three weekly flights on Helsinki - Tokyo service during the peak summer season from June to September.

"Currently Finnair flies scheduled flights to Tokyo four times weekly with Airbus A340 aircraft and with these scheduled charter flights Tokyo will be served daily during the high season.

"The addition of these flights will accommodate the demand from Japanese group travel which is at its highest level to Finland and Scandinavia during the four months.

"The flights will be flown on Mondays, Wednesdays and Fridays from Helsinki and on Tuesdays, Thursdays and Saturdays from Tokyo Narita airport from 13 June to 30 September 2009."