Houston based ExpressJet Airline Holdings shed 3.7% of value on 12-Jul-2010, falling USD0.10 on the back of quite reasonable traffic figures.

ExpressJet Airlines, which operates its ERJ145s mainly for Continental (Continental Express) and United, is not having a happy time. The parent’s stock price has slithered slickly downwards since early May-2010 – which sadly coincides with the arrival of new CEO, Thomas Hanley. But the woes cannot fairly be laid at his feet. 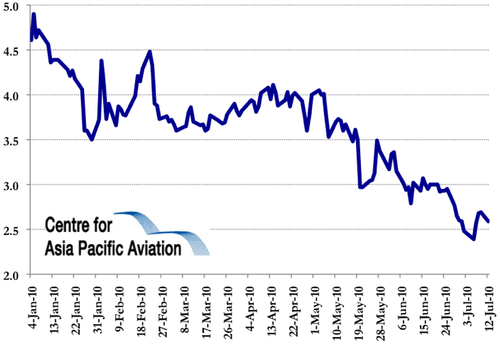 The first quarter of 2010 had been painful, with a combination of significant start-up costs for its new United Express operation, rising labour costs and penalties for irregular operations during the winter snowstorms. The company posted a loss of USD16.1 million, up 41.1% year on year.

Mr Hanley is confronted with the unavoidable impact of of rising costs, largely driven by high fuel prices, making the dynamics of 50-seater jets a challenging operation; simultaneously, as the majors for whom the airline is contracted to work are themselves going through contortions and seeking to prune costs wherever possible. He has made clear he will not seek instant solutions, but try to work a way through the various issues.

The company possesses a reasonably strong balance sheet, but, barring a strong improvement on the back of the airline’s financials, the shape of that stock price graph will weigh heavily on the peace of mind of many investors. Mr Hanley will have to hope they too are prepared to be patient.

Reporting traffic figures for Jun-2010 yesterday, ExpressJet’s 23% rise in RPMs compared favourably with an ASM increase of 21%, generating a load factor improvement for the month, year-on-year, of just over 1.2ppts, to 83.3%. The improvement was even better for the six month period, with a 23% RPM increase, over only 18% more ASMs. Average load factor for 1H2010 was up a solid 3.2ppts.

Other falls on the day were US Airways (-3.6%), Hawaiian (-3.4%), losing some of the ground made on Friday. Canadian carriers Air Canada (+2.7%) and Jazz (+2.4%) were the best performers, as the national economy appeared stronger, while Westjet, which had gained on Friday, remained steady. 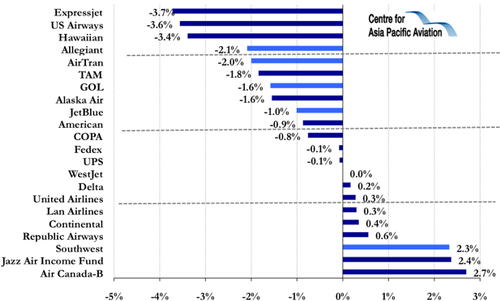