Europe’s big three LCCs – easyJet, Air Berlin and Ryanair – posted the sharpest losses on Friday as wider European markets were rattled by the latest US employment news, reviving concerns that not all is well in the world’s biggest economy. The "big freeze" is also weighing on performance in the region, keeping some aircraft grounded across their core markets.

Also in Europe, Vueling (-0.1%) closed down slightly on news the Spanish LCC has been granted 7000 slots at Amsterdam Schiphol Airport. The LCC has recently expanded outside its home market, opening a base in Toulouse.

Despite a poor performance on the Kuwait Stock Exchange on Friday, Jazeera Airways gained 5.0% on Friday to close at KWD126, its highest in four months.

In Asia, brokers have reaffirmed their bullish outlook on AirAsia, with ECM Libra stating it remains one of its top picks. Shares in Asia’s largest LCC have risen 95% this year, against a 19% gain on the Malaysian bourse. 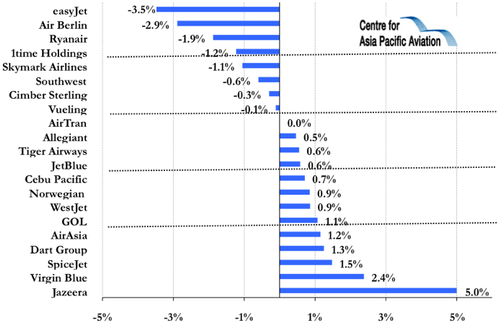