Europe's overall capacity recovery from the COVID-19 pandemic is at 84% of 2019 seat numbers. It is now fairly uniform from Europe to most of the major route regions, Europe-Asia Pacific the exception. Seat numbers from Europe to every other region are now well over 80% of capacity flown in the equivalent week of 2019, with Europe-Africa up at 98%. However, Europe-Asia Pacific is only at 41%.

Europe's seat capacity shortfall of 16.0% versus 2019 in week commencing 9-May-2022 is fractionally lower than last week, but still its second best performance since before the COVID-19 crisis.

The received wisdom for much of the pandemic was that short/medium haul routes would lead the recovery and this was largely true. However, capacity from Europe to the Americas is now slightly ahead of intra-Europe as a percentage of 2019 levels.

In the week commencing 9-May-2022, total European seat capacity is scheduled to be 27.6 million, according to OAG schedules and CAPA seat configurations.

This is -16.0% below the 32.9 million seats of the equivalent week of 2019 and is just 0.4ppts worse than last week, which was Europe's strongest week on this measure since before the coronavirus pandemic.

This week's total seat capacity for Europe is split between 7.1 million domestic seats, versus 7.7 million in the equivalent week of 2019; and 20.6 million international seats, versus 25.1 million.

Africa and Asia Pacific have taken upward steps in the trend this week, whereas Latin America and the Middle East have taken downward steps.

North America and Europe are broadly flat on last week. 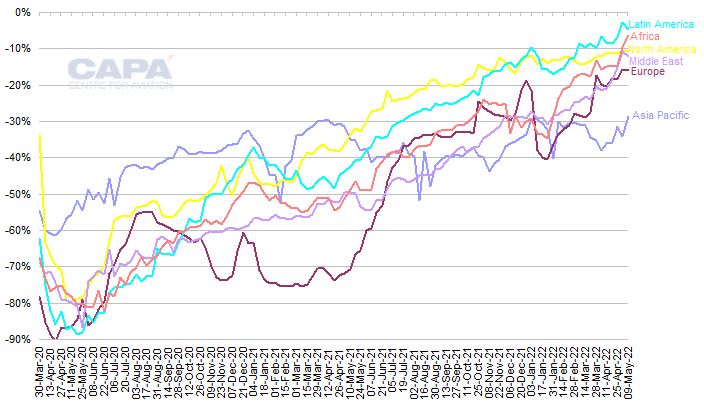 The recovery is now more uniform for all route regions from Europe, apart from AsPac

Analysis of capacity data for the week of 9-May-2022 for each major route region from Europe shows that the recovery has become more uniform in recent weeks, with the exception of the laggard Europe-Asia Pacific.

Moreover, intra-Europe is no longer leading the recovery, as it did throughout much of the COVID-19 pandemic.

Capacity from Europe to each major region: seats as percentage of equivalent week of 2019, week of 9-May-2022

The route region from Europe that is now closest to its seat capacity of the equivalent week of 2019 is Europe-Africa, which has reached 98%.

This reflects the broader surge in all Africa capacity as a percentage of 2019 levels in recent weeks. In late Jan-2022, Europe-Africa was at only 51%.

Europe-Latin America has reached 88%. It has been steadily over 80% throughout the Omicron wave of the coronavirus and the Ukraine crisis.

Both of these intercontinental route regions are ahead of Europe-Europe, which is at 86% of 2019 seat levels.

Europe-North America, the most important long haul region, is at 84%, exactly in line with all Europe capacity. Europe-Middle East is at 82%, close to most of the other route regions after rising sharply from 69% in early Apr-2022.

Europe-Asia Pacific – which was Europe's second most important long haul route region before the pandemic – continues to lag the recovery of other regions. It has reached only 41% of 2019 seat capacity and has been bottom of the ranking on this measure throughout almost all of the COVID-19 pandemic.

Capacity from Europe to each major region: seats as percentage of equivalent week of 2019, weekly from 2020 to 2022 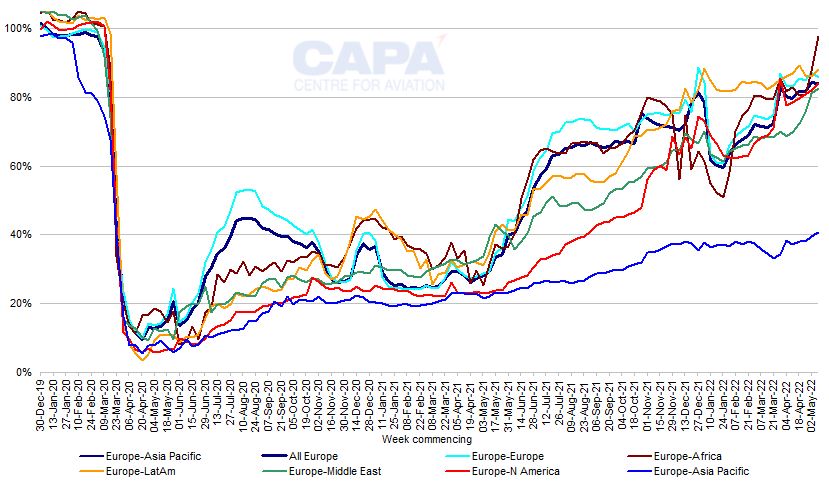 The divide is no longer short/medium haul versus long haul

The above data emphasise that the recovery in European aviation capacity has progressed significantly beyond short/medium haul.

True, Europe-Africa is dominated by routes to/from North Africa, which are short/medium haul.

Nevertheless, Europe-Latin America is a fully long haul market and its recovery has progressed particularly strongly. Moreover, the North Atlantic's recovery is now keeping pace with Europe's overall recovery, having lagged for much of the pandemic.

The strength of the recovery in capacity from Europe to the Americas highlights the positive impact of reduced travel restrictions. This point is further underlined by the weakness of the other long haul route region, Europe-Asia Pacific, where tight restrictions (particularly in China) are constraining the recovery.

The divide is no longer short/medium haul versus long haul, but along the line of liberalised travel versus restrictions and lockdowns.