Europe's capacity recovery is taking another pause for breath.

Monthly passenger load factors reported by IATA as at Apr-2022 were closer to levels achieved in the equivalent month of 2019 levels than at any time since before the pandemic.

Flight cancellations, albeit at lower rates than headlines imply, are likely to keep capacity from making a further jump as a percentage of 2019 levels for now, but may give further impetus to load factors.

In the week commencing 13-Jun-2022, total European seat capacity is scheduled to be 30.8 million, according to OAG schedules and CAPA seat configurations.

This week's total seat capacity for Europe is split between 7.7 million domestic seats, versus 8.3 million in the equivalent week of 2019; and 23.1 million international seats, versus 27.6 million.

Asia Pacific and the Middle East have taken upward steps in the trend this week, whereas Latin America and North America have taken downward steps.

Europe and Africa are broadly flat on last week. 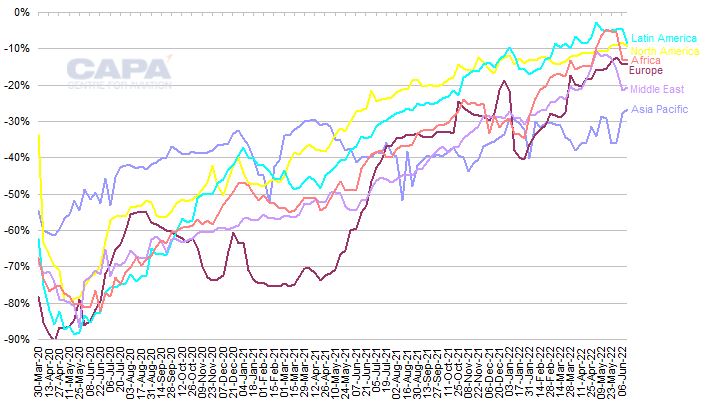 Projections for 3Q2022 are at 89.9% of 3Q2019 seat numbers, down by 0.4ppts from last week. This projection has been fairly stable over the past few weeks, although it continues to be trimmed.

Passenger load factors are closing in on 2019 levels

Previous CAPA analysis comparing seat capacity data with airport passenger numbers across Europe from ACI Europe has shown that traffic continues to recover towards 2019 levels at a slower rate than seat numbers.

Nevertheless, the gap has been closing, implying that load factors must be improving.

Recent IATA analysis confirms that global passenger load factors in Apr-2022 – the most recent month for which data are available – were closer to their 2019 levels than in any month since before the coronavirus pandemic.

Since the Apr-2022 traffic figures from IATA, a number of European countries have experienced an increase in the number of flight cancellations, particularly in late May-2022 and into early Jun-2022. However, only a relatively small proportion of flights have been cancelled.

As noted previously by CAPA, headlines in the UK have exaggerated the scale of flight cancellations. Airline schedules have recovered towards 2019 levels more quickly than airlines' ability to staff and operate those schedules, but only slightly.

One consequence of cancellations is that passengers are rebooked onto alternative flights.

European aviation's capacity recovery seems likely to continue to level off until staffing problems are solved, but that should lead to further increases in reported load factor.