Europe's aviation capacity recovery from the COVID-19 crisis has reached another new high after three successive weeks of increases in seat numbers as a percentage of the equivalent week of 2019.

Europe's seat capacity has reached 87.5% of 2019 levels in the week commencing 30-May-2022, or in other terms – a shortfall of 12.5% compared with the equivalent week 2019. This is its best performance on this measure since before the crisis.

There are signs that capacity projections for Europe are becoming more stable, but also that the capacity recovery may level out in 3Q2022 (as a percentage of 2019 levels). Moreover, the passenger traffic recovery is still behind the seat capacity recovery in Europe, but the gap appears to be closing.

In the week commencing 30-May-2022, total European seat capacity is scheduled to be 29.8 million, according to OAG schedules and CAPA seat configurations.

This is -12.5% below the 34.1 million seats of the equivalent week of 2019 and is an improvement of 0.9ppts compared with last week. It is Europe's strongest week on this measure since before the pandemic, after three consecutive weeks of improvement.

Europe's domestic seats are down by -5.3% versus 2019, compared with last week's -9.3%. This is almost back to the -5.1% reached in late Dec-2021, which was the domestic market's best week on this measure since before the pandemic.

International seat capacity is down by -14.6% versus 2019 – the strongest week on this measure since before the pandemic, although only fractionally better than last week (23-May-2022), when capacity was -14.7%.

Europe has moved above the Middle East into fourth place in the ranking of regions measured by seats as a percentage of 2019 levels this week.

Africa and Latin America have been swapping places at the top of the ranking in recent weeks.

Europe has taken an upward step in the trend this week, whereas the Middle East has taken a downward step and all other regions are broadly flat on last week. 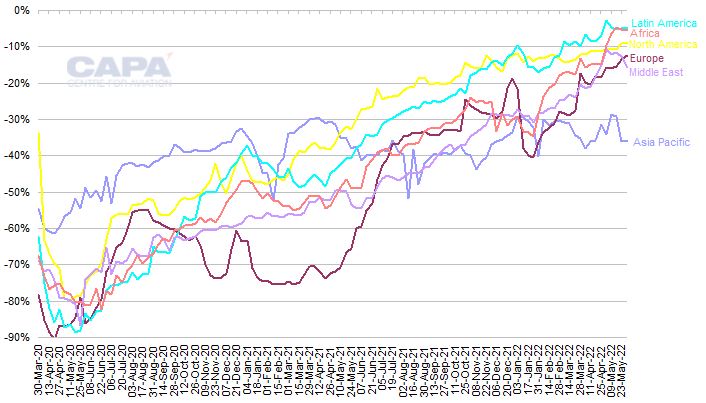 With only one more month of 2Q2022 left, the projection is unlikely to change substantially, based on the pattern of previous quarters since the onset of the pandemic.

The cut in schedules in the final month of each quarter has been minimal.

One month before the start of 2Q2022, the projection was for 92%. The 7ppt decline since then is the smallest over the equivalent time frame of any quarter since before COVID-19 first struck.

This demonstrates the greater stability of future airline schedules.

…but the capacity recovery may level out in 3Q2022

This suggests that the final outcome for 3Q may not be much higher than for 2Q.

If the 3Q schedule is trimmed by more than 6ppts between now and its final outcome, it may even end up at a lower percentage of the equivalent period of 2019 than 2Q.

Europe: projected seat capacity as a percentage of equivalent quarter of 2019 one month before quarter start and at quarter start, with final outcome 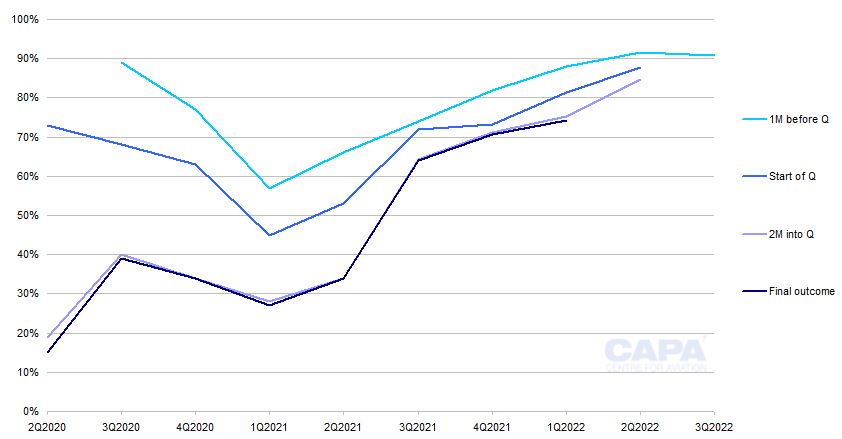 Demand data, expressed as passenger numbers, have also been strengthening, but at a lesser rate than capacity data. Moreover, there is a reporting lag in passenger data.

Throughout the pandemic, the trend in passenger numbers has consistently fallen short of seat numbers when expressed as a percentage of the equivalent period of 2019.

Weekly passenger data for Europe's airports were reported by ACI Europe from early in the pandemic until late Oct-2021. Since then, only monthly passenger numbers are available. 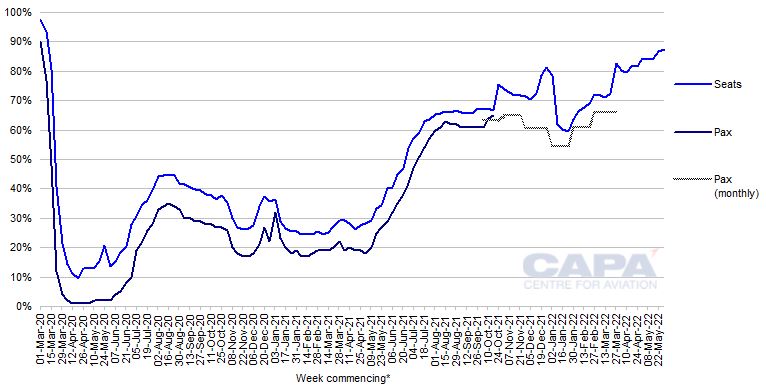 Another weekly high in Europe's seat capacity as a percentage of 2019 levels is clearly positive for its aviation industry. In addition, the growing robustness of future schedules is a sign of growing confidence.

That said, future schedules are still more likely to be trimmed than increased and the pace of Europe's capacity recovery as a percentage of 2019 levels may ease in 3Q2022.

Moreover, the sharp reversal of the recovery in Jan-2022 as the Omicron wave swept across the continent is a reminder that future variants of COVID-19 (or, indeed, other diseases) could possibly change future capacity plans more dramatically.

Nevertheless, it does now seem that schedules are starting to become a more realistic view of future capacity plans once more, rather than the fantasy fiction that they became during the COVID-19 pandemic.