European aviation bumps along the bottom ahead of a summer climb

However, plans from May-2021 suggest that European operations will pick up across the summer, led by short haul leisure. Long haul is likely to start with US-UK, given their advanced rates of vaccination.

Europe has been at approximately 25% of 2019 capacity for nine weeks. This is the lowest since operations restarted in early summer 2020, after the almost complete grounding of fleets in the first months of the COVID-19 pandemic.

OAG schedules currently imply 37% of 2019 seats in Apr-2021, rising to 80% in Jul-2021. In reality, the curve is likely to slope up less steeply than that, but European aviation activity is bumping along the bottom in anticipation of a summer climb.

In the week commencing 15-Mar-2021, total European seat capacity is scheduled to be 7.1 million.

This is 74.8% below the 28.4 million seats of the equivalent week of 2019 and the ninth consecutive week of a similar rate of decline. It is the 52nd week of very heavy double digit percentage (more than 50%) declines in seats versus.

This week's total seat capacity for Europe is split between 3.3 million domestic seats, versus 7.4 million in the equivalent week of 2019; and 3.8 million international seats, versus 21.0 million.

Europe has been the worst performing region for five months

Ranked by the percentage decline in capacity versus 2019, Europe has been at the bottom of the regional league table since mid Oct-2020.

North America and Asia Pacific have enjoyed an improvement in the trend of seats versus 2019 levels this week, whereas Latin America has taken a downward step.

Europe, Middle East and Africa are at a similar percentage of 2019 capacity as they were last week. 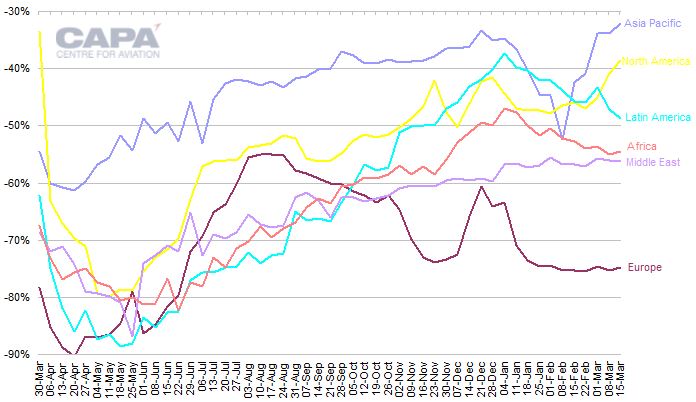 Summer 2021 schedules are projecting too rapid a recovery

Apr-2021 capacity has been cut by 18% since last week and is now projected at 37% of 2019 capacity. This is starting to look more realistic, having been projected at more than 50% as recently as two weeks ago.

Anne Rigail, CEO of Air France – one of Europe's leading legacy airlines – told CAPA Live on 10-Mar-2021 that achieving 70% of 2019 capacity in 3Q2020 would be a very good outcome. She added that the airline had repeatedly pushed back its restart forecasts throughout the crisis.

As the chart below highlights, airline schedules filed with OAG have been consistently overly optimistic throughout the pandemic.

As the COVID-19 crisis moves into its second year, there has yet to be a single week when capacity projections derived from filed schedules have not been revised downwards in subsequent weeks. 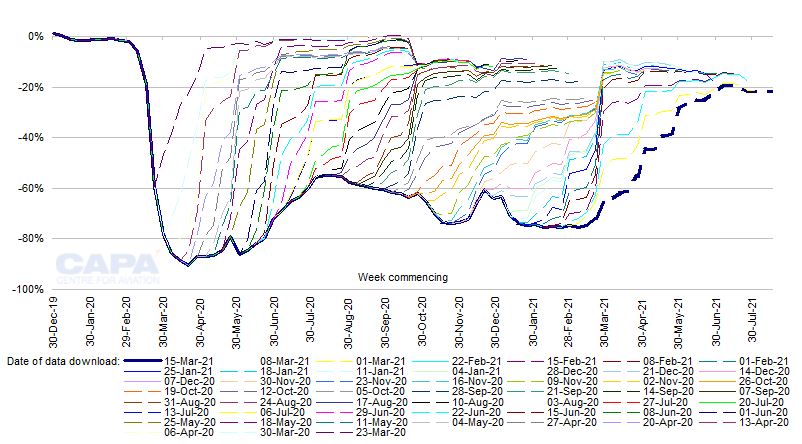 EUROCONTROL does not see significant activity planned for Apr-2021…

EUROCONTROL Director General Eamonn Brennan told CAPA Live on 10-Mar-2021 that his organisation would be able to handle the ramping up of capacity when it comes.

He explained that files scheduled with OAG were less of an indication of airline operational commitments than flight plans filed with EUROCONTROL.

"When they file the flight plans, there's a better chance because they have fuel lot loads and crews and it's more of a mental commitment", he said.

He noted that airlines were not yet filing significant flights plans for Apr-2021, indicating that it would likely remain a quiet month.

…but flight plans are picking up across the summer

Nevertheless, Mr Brennan said flight plans were more significant for May-2021 through to Aug-2021, although he expected a later summer peak in Europe this year (in July, August and September).

He predicted that the recovery would be led by tourism from Northern Europe, starting with the UK, to the southern European/Mediterranean nations.

EUROCONTROL was seeing almost no significant sign of long haul operations before Jul-2021, with North America emerging as the most important long haul destination from Europe at that time.

UK and US could lead the long haul restart

The UK and US are leading the vaccination roll-out among the larger nations of the world, measured by doses per 100 people.

As a result, Mr Brennan predicted: "I think you might see a confluence with the UK and the United States starting off in the North Atlantic. And I see reasonable North Atlantic operations resuming from August, September".

Nevertheless, with respect to Asia (where vaccination rates are lower), the recovery is likely to take longer to start. "I don't see big operations to Australia until maybe November, December, if that", he said, "and then China around that time".

On 28-Jan-2021 EUROCONTROL published traffic scenarios for upside and downside cases on the evolution of flight numbers in the period Feb-2021 to Jun-2021.

Traffic in the first two days of Mar-2021 was down by 65%, compared with its full month scenario range of -72% to -77%. (Note that the number of flights has performed around 10ppts better than seat capacity as a percentage of 2019 levels.)

Although the trend has been above EUROCONTROL's expectations, flight numbers are still at very depressed levels, with Feb-2021 and Mar-2021 slightly below Jan-2021.

European aviation can expect activity to climb through the summer

That said, the agency's data support CAPA's view that European aviation activity is bumping along the bottom in anticipation of a summer climb (although, of course, significant uncertainties remain concerning new variants of the virus, vaccination progress, and government policies on travel restrictions).

As noted above, current schedules filed with OAG are too optimistic with regard to summer 2021 seat capacity in Europe.

Nevertheless, the capacity curve is likely to slope upwards in 2Q2021, even if is not as steep as schedules suggest, and to climb more steeply in 3Q2021.