European airlines' May traffic declines, but June looks like it will be just as bad

May-2009 saw some of the deepest and most consistent falls in demand for Europe's full service carriers for the year to date, a sign that any "green shoots" of economic recovery are yet to find fertile soil. Hopes of 'V' or 'U' shaped recovery trends are now rapidly evaporating, as diminishing fares fail to stimulate demand and take an unsustainable bite into airline revenue.

While the international passenger and cargo traffic decline has steadied, the most recent traffic reports from airlines and airports indicate that a long 'L' shaped recovery is the most likely scenario. As IATA Director General and CEO, Giovanni Bisignanni, stated at the IATA AGM in Kuala Lumpur last week, "this may be the bottom, but recovery is different".

Europe's airlines are now due to embark on another round of capacity cuts, as consumer confidence and yields, particularly on the premium travel dominated long-haul sectors, fall to record lows. Aer Lingus announced at the end of last week that it would cut long-haul capacity by 25% for its upcoming Winter schedule, citing declining yields in "exceptionally poor market conditions" which resulted in a 19% fall in average fares in 1Q2009. This comes despite the carrier reporting a 2.7% increase in overall passenger traffic during May.

For the week ended 07-Jun-2009 (Week 23), total scheduled traffic (RPKs) for Association of European Airlines (AEA) member carriers was down 7.3% year-on-year, compared to 7.0% in the previous week and falls of 9-10% through the early part of May. The AEA itself stated that the traffic results for the last four weeks of May and the first week of June are "relentlessly poor".

The hardest hit market has been the Asia Pacific, which has typically seen greater price sensitivity and demand falls than traffic on the North Atlantic or short-haul cross-border European traffic. Asia Pacific traffic declined 12.6% for the week to 07-Jun-2009 - the fourth consecutive double-digit decline.

Europe's LCCs have noted a strong increase in substitution, with passengers switching from long-haul leisure markets to short-haul travel around Europe and North Africa. In addition, LCCs are receiving an increasing share of the premium market, as cost sensitive business travel managers look for ways to deal with smaller budgets, accelerating what had already been a strong trend away from premium travel with full service carriers in Europe. 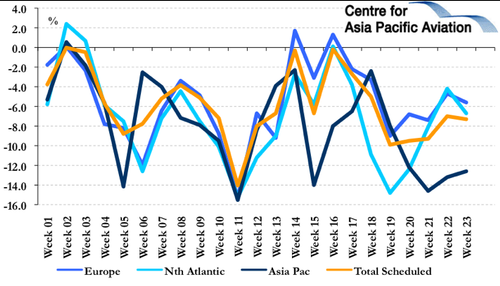 Traffic on the North Atlantic has also displayed continued weakness, down 6.7% in Week 23. Cross-border European remains the strongest segment for AEA carriers, although traffic is still declining at better than 5%.

The deep capacity cuts made by Europe's full service carriers in May have continued into early June, although the gap between capacity cuts and the fall in demand is beginning to blow out once again. Total scheduled capacity offered by AEA members dropped 4.7% in Week 23. This is the fourth week that carriers have cut capacity by more than 4.5%. 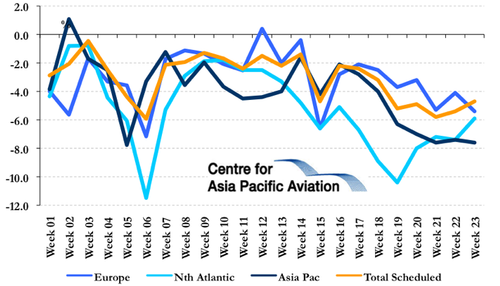 Asia Pacific capacity cuts have been the deepest, down 7.6%, the second deepest reduction this year. Capacity on the Nth Atlantic was down 5.9%, although this does not match the deep cuts made in April and May.

European capacity cuts were the deepest since the beginning of April, down 5.4%, almost matching the 5.6% reduction in demand.

The gap between the fall in demand and AEA member capacity reductions threatens to widen again, as the drop off in demand remains far greater than European airlines ability, or willingness, to reduce capacity. 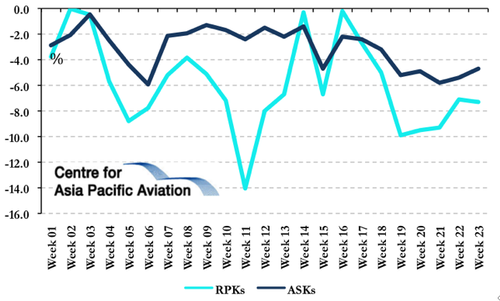 After relatively good news for passenger load factors for AEA member airlines earlier in May, Week 23 has seen average load factors drop back to 73.2%. Overall load factors are still much better than the early months of the year, however. 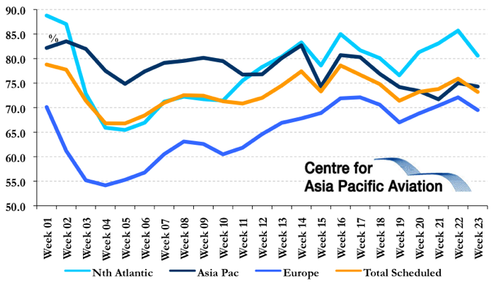 Asia Pacific are the exception to the general trend, at 74.3% they are considerably lower than the levels achieved for the majority of the year. North Atlantic load factors saw the sharpest downward correction, at 80.6%, down 4.7 ppts compared to the previous week.

Load factors for cross-order European traffic also move downwards, to 69.5%, although this is still comparatively high for the year to date.

IATA Director General & CEO, Giovanni Bisignani stated at last week's IATA AGM that there is "no modern precedent for today's economic meltdown. The ground has shifted".

The single bright spot on the horizon had been from ATM body EUROCONTROL. It is forecasting a 5.5% decline in European aircraft movements in 2009, but has predicted a return to weak growth for aircraft movements in November of December this year. But all forecasts carry heavy conditions in this environment, as visibility remains foggy at best.