European airline traffic levelling out, but where will it go from here?

Supply and demand appear to be approaching an equilibrium for Europe’s full service airlines, with both airline capacity levels and passenger demand levels still shrinking, but at a much smaller rate than at the start of the year.

European carrier outlooks for both traffic and finances for the full year remain pessimistic, and forward bookings for most carriers are still notably weak. The economic outlook is still uncertain and consumer confidence remains tepid.

Lufthansa recently announced that it is preparing for the economic downturn to last for another two years, after earlier counting on a late 2009 recovery, and the carrier is continuing stringent cost control and consolidation efforts. The German carrier sees no sign of recovery in a still difficult passenger market, with further sharp falls in revenue anticipated.

Air France-KLM is only slightly less dour, although the carrier’s revenue plummeted by more than a fifth last quarter. The carrier’s outlook for its passenger business is for continued deterioration, albeit at a slower pace, provided a scenario of stabilisation in the global economy, followed by a gradual recovery at the end of 2009, is achieved. If not, then matters could be far worse.

Global air freight volumes, a lead indicator of economic health, remain depressed, but both DHL and TNT reported in the last few weeks that the decline in cargo traffic appears to be bottoming out, with trade volumes stabilising. However, with some carriers' freight volumes reporting falls of greater than 40% last quarter, stabilisation at this level is not a particularly attractive prospect.

With demand levels flattening out at around -2% to -3% over the past few weeks, Europe’s full service airlines have been better able to manage their capacity levels, resulting in better load factors. 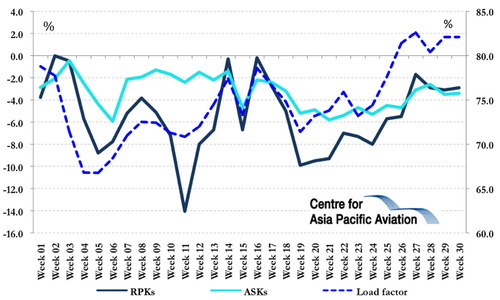 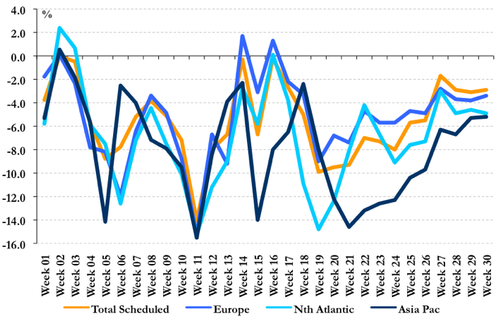 Asia Pacific demand improved very slightly from the previous week, but remained down 5.2% year-on-year. North Atlantic traffic was slightly weaker, down 4.9% (compared to a 4.6% drop in Week 29). European cross-border traffic was up mildly, a 0.4% improvement from last week to -3.4%. 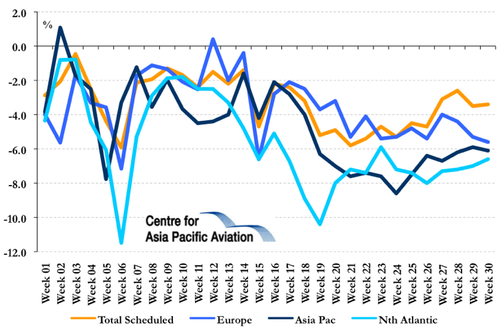 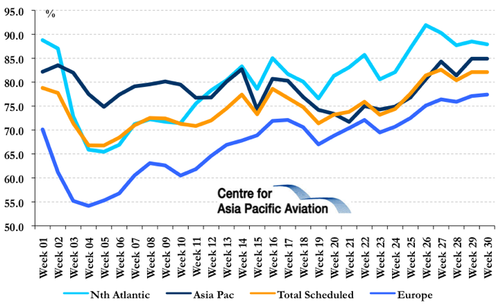 Overall, capacity has now lagged slightly behind demand for more than a month. European airlines may be able to garner some pricing traction as a result, hopefully stemming the horrendous yield falls that have been recorded by many carriers over the past few months.