European shares fell to a one-month closing low on Tuesday as disappointing US housing data underscored concerns over the pace of recovery in the world's largest economy. Existing-home sales were sharply lower in Jul-2010, dropping 27.2% on a seasonally adjusted basis, with sales at the lowest level since the existing-home sales series was launched in 1999.

Air Berlin shares declined 1.7% yesterday, as the carrier, in a limited financial result release, reported a second quarter net loss on charges related to flight cancellations due to the eruption of the Icelandic volcano in Apr-2010.

The EUR56.9 million net loss, compared with a profit of EUR7.1 million in 2Q2009 (and EUR4.7 million including the TUIfly City Carrier business), occurred despite a EUR11.3 million tax benefit in the quarter.

Second-quarter revenue rose 4.9% to EUR877, due to the acquisition of the TUIfly City Carrier business but decreased 6.2% on a pro-forma basis.

The carrier, which will release a full financial report on Thursday (26-Aug-2010) did not provide an update to its full-year guidance, which previously outlined expectations of an increase in full-year sales and operating earnings as well as recovering passenger volumes. 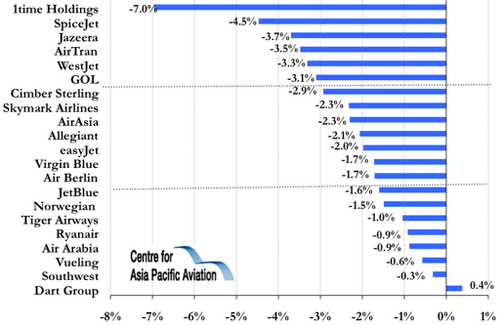