European airline shares slumped yesterday under the double weight of a sell of over European sovereign debt concerns and the threat of Iceland's Grimsvotn repeating last year's ash-related airspace shutdown.

Northern European carriers were among the most heavily affected, with Aer Lingus down 7.1%, Ryanair dropping 5.4%, Icelandair down 5.1% and International Airlines Group (made up of British Airways and Iberia Airlines) falling 5.1%.

The ash-cloud from the volcano forced British Airways, KLM, easyJet and Jet2 to cancel flights into Scotland. Loganair's domestic operations in Scotland was also affected. Iceland's main airport at Keflavik is closed and the Icelandic air navigation service provider ICAVIA has cancelled all domestic flights and established a no-fly zone around the volcano.

European air navigation agency EUROCONTROL is monitoring the situation. The European Aviation Crisis Coordination Cell (EACCC) has been activated and has held its first meeting. Participants, who included EU states, the European Commission, EUROCONTROL, EASA, air navigation service providers, airlines, and airport associations, shared information on the current situation in European airspace as well as on its possible evolution. EUROCONTROL warned that it is not possible to identify with certainty the movements of the ash cloud beyond a 24-hour time-frame. 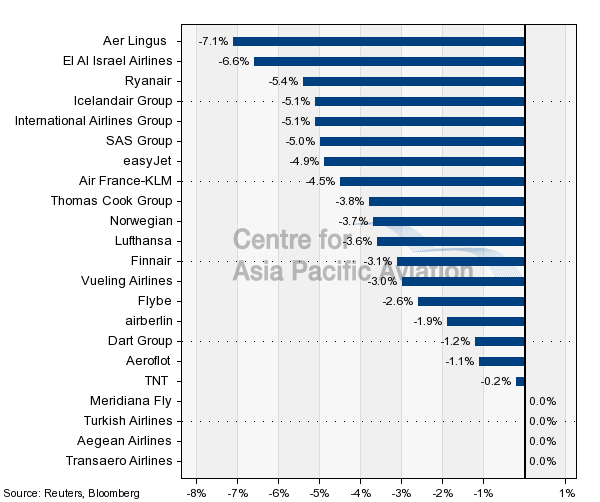