The UK has made its first, small, steps to reopening non-essential international services from 17-May-2021. Its green list of countries accounted for only 4.9% of total UK capacity in 2019, and includes countries where there is no reciprocal reopening (e.g. Australia) and where geopolitical risks have rapidly reduced demand (e.g. Israel).

Nevertheless, capacity between the UK and Portugal, the most significant green list market, will multiply by more than 19 times in the space of a fortnight. Total UK seat capacity is 1.8 times higher week-on-week in the week of 17-May-2021, but it is still 83.2% below 2019 levels.

Capacity in Europe overall is 66.6% below capacity in 2019. This rate of decline has now narrowed for four straight weeks, but Europe is still far behind other regions.

In the week commencing 17-May-2021, total European seat capacity is scheduled to be 11.2 million, according to OAG schedules and CAPA seat configurations.

Nevertheless, this is 4.0ppts better than the 70.6% fall a week ago – the biggest weekly improvement of 2021 so far (the week-on-week capacity increase of 15.7% is also the strongest of the year so far).

Europe is still far behind other regions, but the gap has narrowed a little

North America, Latin America, Africa and Europe have taken upward steps in the trend of seats versus 2019 levels this week, while Middle East and Asia Pacific are broadly flat on last week's level. 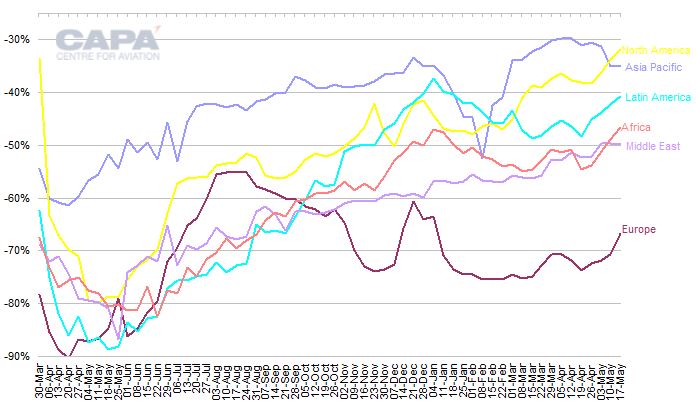 The leading markets of E/C Europe – Russia and Turkey – are the two biggest markets by seats in all of Europe, thanks to their large domestic markets (which have been less adversely affected by the pandemic, compared with international markets).

Among the leading Western European markets, the two nations with the highest percentage of their 2019 capacity are Greece (36.8%) and Portugal (32.4%).

Western Europe's biggest summer sun markets, Spain, France and Italy, are all on less than 30% of their 2019 seat numbers.

Greece and Portugal are both led by leisure demand as the summer 2021 season starts to build.

Greece lifted quarantine requirements on travellers from the EU and a growing list of other nations (including the UK and US) in Apr-2021. Greece and the UAE have agreed a travel corridor between the two nations for fully vaccinated passengers.

Portugal is the most significant country by seat capacity on the UK's green list of countries from which arrivals are no longer required to quarantine, which took effect on 17-May-2021.

The UK itself, Europe's biggest aviation market by seats before the pandemic, is currently at only 16.8% of its 2019 seat capacity – the lowest percentage among the top 15 markets in Europe.

Europe's capacity is growing, but is still very low

The beginning of the relaxation in travel restrictions in the UK is noticeable in capacity data for that market and also for Europe overall. The biggest weekly improvement in European capacity data since Dec-2020 is a positive sign.

However, capacity data are only just starting to show an improvement in recent weeks and remain at very low levels.

European airlines' summer 2021 capacity is likely to grow from 2Q into 3Q, but not at the rates in currently filed schedules.