Etihad has launched services to Ho Chi Minh, becoming only the tenth non-Asian airline serving Vietnam. Abu Dhabi is now one of only seven destinations outside Asia-Pacific that are served non-stop from Vietnam.

Vietnam remains an under-served long-haul market with huge potential. But Gulf carriers have been quick to recognise the opportunities in Vietnam and are now among Vietnam’s largest international carriers.

Vietnam-UAE bilateral paves the way for Emirates and Etihad

The launch of services to Ho Chi Minh by Emirates and now Etihad was made possible by the signing of a bilateral agreement between the UAE and Vietnam in Apr-2011. Following the agreement it was clear Qatar would not be able to enjoy for much longer its status as the only Gulf carrier serving Vietnam. For several years all three major Gulf carriers have already been competing in every other major Southeast Asian market – Indonesia, Malaysia, Philippines, Singapore and Thailand.

Etihad began operating a daily non-stop service from Abu Dhabi to Ho Chi Minh on 1-Oct-2013 with a 262-seat A330-200s. Etihad’s decision to enter with a non-stop flight is significant as about 40% of the capacity flown into Vietnam by non-Asian carriers is part of a one-stop service via other Asian cities.

Etihad joins only six other carriers in operating non-stop services to Vietnam from Europe or the Middle East, according to Innovata data. This includes Emirates and Qatar along with Air France, Finnair and Russia’s Aeroflot and Transaero. These seven carriers, including Etihad, now operate a combined 34 weekly non-stop flights, including 27 from Ho Chi Minh and seven from Hanoi.

Vietnam Airlines also currently operates 21 weekly flights to four destinations in Europe – Frankfurt, Moscow, Paris and London Gatwick. London is currently served one-stop via Frankfurt while the other three are served non-stop with a mix of eight frequencies from Ho Chi Minh and 13 from Hanoi.

The other four non-Asian carriers serving Vietnam do not operate non-stop flights from their hubs. Lufthansa and Turkish Airlines serve Ho Chi Minh via Bangkok with Lufthansa operating three weekly flights and Turkish a daily frequency. Qatar also offers one daily flight to Hanoi via Bangkok in addition to its one daily non-stop from Doha to Ho Chi Minh with continuing service to Phnom Penh in Cambodia.

United, the only carrier from the Americas that is currently serving Vietnam, operates a daily flight from Hong Kong. United down-gauged its Ho Chi Minh service in Oct-2011 from a 747-400 to 737-800, giving it limited capacity in the market.

Despite the United reduction and the termination of services from Polish carrier LOT, total capacity from non-Asian carriers has gone up by about 36% over the past two years from about 24,000 weekly seats in Oct-2011 to about 33,000 seats in Oct-2013. The launch of services by Emirates and Etihad and an increase in capacity from Qatar has accounted for this entire increase. (The 33,000 seat figure but does not include the capacity Qatar provides between Ho Chi Minh and Phnom Penh.)

Finnair also has entered the Vietnamese market, launching a thrice weekly flight from Helsinki to Hanoi in Jun-2013. But the capacity provided by this service simply offsets the capacity previously provided by LOT in the Warsaw-Hanoi market. Finnair and LOT both have relied heavily on transit traffic to destinations throughout Europe as the local market from Finland and Poland to Vietnam is relatively small. LOT dropped Hanoi in Mar-2012 after less than two years on the route and instead launched Warsaw-Beijing as its only Asian service.

The Gulf airlines are also relying heavily on demand from Europe to fill its seats to and from Vietnam. Europe is an important and growing source of tourists for Vietnam’s emerging tourism sector. Business traffic between Europe and Vietnam is also growing as Vietnam’s economy continues to attract increasing investment from overseas.

With a one-stop product from Ho Chi Minh to dozens of European destinations, Emirates, Qatar and now Etihad are well positioned to benefit from the rapid growth in the Europe-Vietnam market. Vietnam Airlines provides relatively limited capacity with its 21 weekly return flights to Europe providing about 14,000 weekly seats, which is only slightly more than the non-stop capacity by the three Gulf carriers. Vietnam Airlines also does not have nearly the range of destinations in Europe as the Gulf carriers.

Lufthansa and Turkish have even larger European networks but their one-stop service to Ho Chi Minh means any destination other than their hub are serviced from Ho Chi Minh with a less appealing two-stop product. Air France and Finnair provide non-stop services from Vietnam but the four weekly Air France flights to Ho Chi Minh cater mainly to the large Vietnam-France local market while Finnair is not much competition against Gulf carriers as it serves Hanoi, which is only served by Qatar with a two-stop product to Europe.

Singapore Airlines, Malaysia Airlines and Thai Airways also compete aggressively in the Vietnam-Europe market. But their European networks are also significantly smaller than the range of destinations offered by Emirates, Qatar and Etihad. Routings via Southeast Asian hubs are also longer, giving the Gulf carriers in many cases the fastest total transit times.

The Middle East-Vietnam market is also growing, particularly the UAE-Vietnam market, driven by increased economic ties between the two countries and increasing tourist numbers albeit from a relatively low base. The UAE is currently Vietnam’s seventh largest trading partner.

But the Middle East-Vietnam market is not nearly big enough to support the nearly 11,000 weekly non-stop seats now offered between the Middle East and Vietnam. Europe will continue to account for a majority of the traffic.

This follows a strategy the Gulf carriers have also used successfully in other Southeast Asian markets, where in recent years they have pursued rapid and significant expansion. Vietnam however provides even bigger potential opportunities given the country’s high growth rates and the fact Vietnam is not nearly as well served as other major Southeast Asian countries.

In announcing the launch of Ho Chi Minh services, Etihad cited strong demand for business and leisure passengers as well cargo between Vietnam, the UAE, the Middle East and Europe. Etihad CEO James Hogan pointed out that Vietnam is the 13th most populous country and has one of the world’s fastest growing economies while Ho Chi Minh has emerged as a busy trading hub.  “Our daily services will inject approximately 3,700 new seats a week into the route. This will intensify competition among airlines for business, leisure and VFR travel from Vietnam to Europe and help boost visitor traffic to the UAE and GCC,” he said.

Etihad previously served Vietnam by relying on a codeshare with Vietnam Airlines via Bangkok and Kuala Lumpur. The codeshare partnership has been extended to include the new non-stop flight between Ho Chi Minh and Abu Dhabi. Having a local partner should help the viability of the new route and enable Etihad to grow its new online Vietnamese operation. Vietnam Airlines currently does not codeshare with Emirates or Qatar.

Etihad now only accounts for about 1% of total international seat capacity in Vietnam but will have a significant impact on the market given its strong position in the Vietnam-Europe market. Both Etihad and Emirates will likely at some point join Qatar in Hanoi.

Qatar has steadily expanded its Vietnamese operation since entering the market in 2009. Qatar is now the fourth largest carrier in the Vietnamese international market, with a 3% share. Its approximately 12,500 weekly seats in the Vietnamese market (includes Ho Chi Minh-Phnom Penh) puts Qatar slightly ahead of Singapore Airlines. 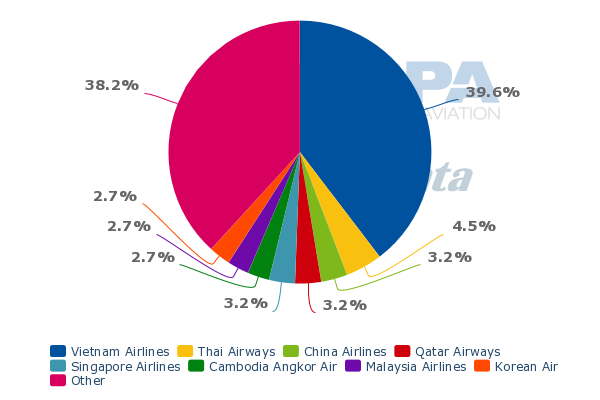 Qatar has increased capacity to Vietnam by 82% over the last two years, adding about 5,500 seats to the market as it upgraded Hanoi to daily, upgraded Ho Chi Minh to non-stop and added a sector beyond Ho Chi Minh to Phnom Penh. This gives Qatar nearly three times as much capacity in Vietnam than Emirates or Etihad, although the three carriers have a similar amount of non-stop capacity between Vietnam and their hubs with each operating one daily non-stop frequency. 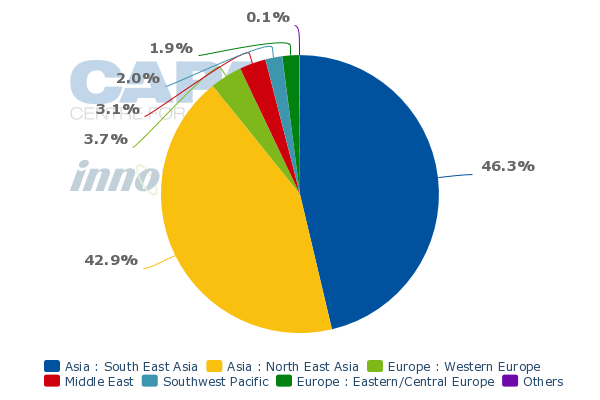 There are currently 44 foreign carriers serving Vietnam, including 34 from other Asian countries. As Vietnam’s economy and tourism sector continues to grow rapidly, more carriers from outside Asia will certainly enter the market. The 10 non-Asian carriers already serving the country will also be well positioned to expand, including the upgrade of one-stop services to non-stop.

If their rapid expansion in other Southeast Asian markets is any indication, Emirates, Etihad and Qatar will all likely add flights to Vietnam as the market matures. With Etihad finally entering the market, competition will intensify. But the demand should be sufficient to absorb the additional capacity and the Gulf carriers are well positioned to grow with the Vietnam-Europe market, particularly if the typically slow to respond European flag carriers do not make a move.