Etihad Airways to treble capacity to Delhi and Mumbai; other airline activity is likely to follow

India will shortly become Etihad Airways' largest single country market, as it announced plans to treble the amount of seat capacity between Abu Dhabi and Delhi and Mumbai by the end of 2013.

Further increases in the number of seats and routes will follow in 2014, although these are subject to regulatory approval.

In addition to this, Etihad also intends to codeshare on a wide range of domestic and international flights operated by its future equity alliance partner Jet Airways, for which regulatory approvals are expected "imminently".

Meanwhile, this massive shift in the balance of power in India is likely to be followed by announcements by other airline, foreign and Indian, as well as Tata, founders of the original Air India and now partnering with Singapore Airlines and with AirAsia.

Etihad’s plans to launch its Indian expansion from 01-Nov-2013, when it will treble the number of seats it operates on its Abu Dhabi–Mumbai and Abu Dhabi–New Delhi routes. Both routes will see frequencies increase from daily to double daily and the deployment of larger aircraft.

The carrier also plans to upgrade its daily Abu Dhabi–Chennai service before the end of 2013, up-gauging the route from 136-seat A320 equipment to new A321 equipment, with 174 seats. Further details of new routes between Abu Dhabi and India and codeshare services with Jet Airways will be announced progressively, as approvals are received and operational details are finalised.

Earlier this year, Etihad Airways announced a USD379 million agreement to acquire a 24% stake in Jet Airways, which is still awaiting final regulatory approval expected by the end of Sep-2013. In a total package valued at USD900 million, Etihad also announced an agreement to acquire a majority stake in the Indian airline’s frequent flyer programme, for USD150 million; the acquisition and lease-back of three pairs of slots at London Heathrow Airport for USD70 million; and financing support for USD300 million of foreign loans. The deal is the first involving a foreign carrier and an incumbent Indian airline since the Indian Government relaxed its policy on foreign direct investment in aviation in Sep-2012.

Etihad Airways’ deal with Jet Airways was always about market access. Even before that regulatory approval has been finalised, Etihad Airways is moving on the opportunity offered.

The Etihad-Jet deal and capacity expansion is previewed under a major revision of the bilateral air services agreement between India and Abu Dhabi, signed earlier in the year. The new agreement adds an allocation of 36,670 seats per week between India and the emirate over three years, up from the current entitlement of 13,600 seats. Other key features of the bilateral agreement include access to 20 points of call in India for Abu Dhabi carriers, and permission for change of gauge of aircraft in Abu Dhabi for Indian carriers. Domestic and third party code sharing is permitted and there are no restrictions on aircraft type. The agreement was only granted final approval by the Indian Cabinet Committee on Economic Affairs earlier in Sep-2013.

The revised bilateral agreement has been controversial in some quarters of India. Political leader Subramaniam Swamy recently filed a petition with the Supreme Court, labelling the bilateral air services agreement a ‘sweetener’ for the Jet-Etihad deal.

India is the largest single country for both the UAE and the Middle East aviation market as a whole, in terms of seats flown and flight frequencies. However, even with a total of nine Indian destinations – Delhi, Chennai, Mumbai, Kozhikode, Thiruvananthapuram, Hyderabad, Bangalore, Ahmedabad and Kochi – in operation, Etihad has been one of the smaller carriers in terms of capacity between the Gulf and India. It had maintained a lower profile in India relative to other Gulf carriers such as Emirates and Qatar Airways, operating primarily narrowbody aircraft. The carrier had not been aggressively pursuing an expansion of the Abu Dhabi-India bilateral until the negotiations with Jet reached an advanced stage 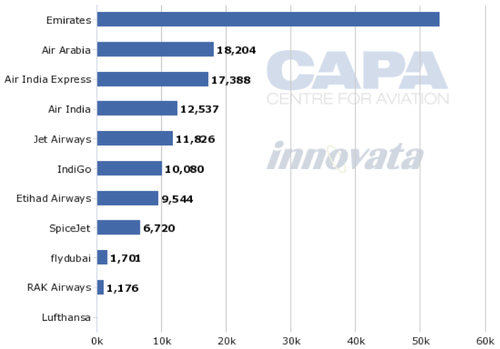 On the Indian side, entitlements to Abu Dhabi have been under-utilised, due to limited third and fourth freedom traffic. Etihad now has the seat capacity allocation necessary to drastically increase its access to the Indian market. According to Etihad Airways' CEO James Hogan, the carrier now has “the opportunity to add significant capacity between the two countries, not only meeting existing demand for trade and tourist travel but also ensuring that we can meet the continued strong growth which is expected between our two countries”.

It now needs to complete its equity deal with Jet Airways in order to fully realise the potential of the Indian market. India is a “key market in the growth strategy of Etihad Airways”, according to Mr Hogan.

Regulatory approvals for Jet-Etihad are expected 'imminently' by Etihad

The Jet-Etihad deal has already received approval from India Foreign Investment Promotion Board (FIPB) and the Cabinet Committee on Economic Affairs. It is now just awaiting the Indian Competition Commission, which is expected to clear the deal before the end of Sep-2013. 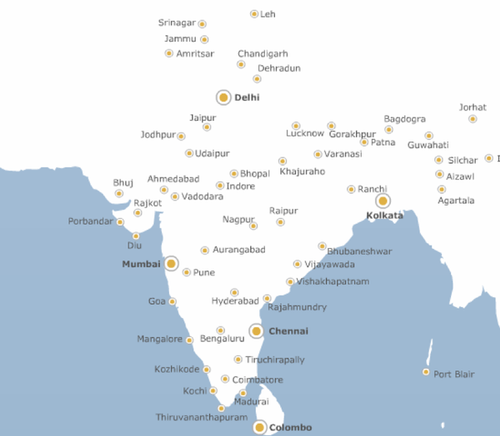 Etihad’s move to expand its operations in India is another game changer. Adding the carrier’s expanded Indian capacity to that operated by Jet Airways, means that the Abu Dhabi-based carrier will start to challenge the position of carriers like Qatar Airways and Emirates into India.

While a combined Etihad-Jet will not yet offer the same capacity as Emirates, at least not yet, this is expected to change over the next three years.

Which will be the next shoe to fall? Air India, Emirates, Qatar and the Indian LCCs are still in play – and now Tata...

Etihad’s bold move into the valuable Indian market shifts the balance of market power, something that its competitors are unlikely to be able to ignore, and one or two further foreign airline investment transactions in incumbent carriers are possible.

Added to the mix is last week’s announcement of a MoU between one of India’s largest business conglomerates, Tata Sons and Singapore Airlines to establish a 51:49 joint venture full service airline in India.

This is the second JV that Tata Sons has entered into in the airline sector, following on from its 30% shareholding in AirAsia India, which cleared an important regulatory hurdle on 20-Sep-2013 when it received a No Objection Certificate from the Ministry of Civil Aviation, paving the way for an application for an Air Operator’s Certificate.

With leading carriers such as Etihad, Singapore Airlines and AirAsia all investing in India, and the possibility of others still to join them, the Indian aviation market looks set to continue on its always surprising ways as Asian and Gulf airlines in particular seek to extend their influence into one of the world’s key growth markets.