MTU Aero Engines' shares continued their strong upward rally, gaining 7.7% on Wednesday to close at EUR47.51 per share. Since early May-2010, the shares have gained more than EUR8 in value, hitting highs not seen since early 2008.

MTU reported a slightly better than expected net profit of EUR68.8 million for 1Q2010 in late Apr-2010, but has maintained a stable outlook for 2010, even in the face of Europe’s debt woes and the affect on air travel of the Icelandic volcano. Revenue, EBIT and net profit are all expected to match 2009 levels, with stronger military sales substituting for lost business in the commercial sector.

Also trading strongly was Rolls-Royce whose shares were up 5.4% yesterday, as the market anticipates a share buy-back from the company. Continued military sales are also expected to keep Rolls-Royce’s business strong over the remainder of 2010.

Parts manufacturer and aircraft interiors specialist, B/E Aerospace, also gained strongly, surging 8%. Also performing above market expectations in 1Q2010, the company expects revenue to decline marginally over the year, but has raised its outlook for profit for the full year on recovering airline passenger traffic. B/E Aerospace’s revenue declined 11.5% year-on-year in 1Q2010, but it still managed to report a profit of USD33.8 million. 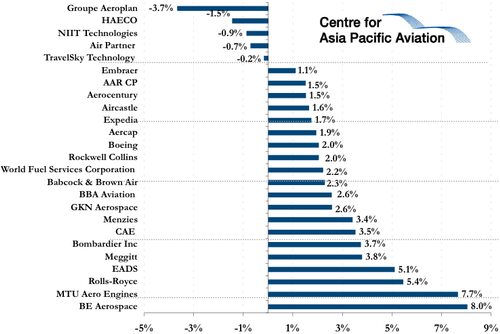