Vietnam’s international market will get a long overdue shake-up later this year as Emirates finally launches services to Vietnam. Emirates’ decision to launch Dubai-Ho Chi Minh City service from Jun-2012 hardly comes as a surprise as Vietnam was the only major Asian country missing from the carrier’s fast-expanding route network. The rapid growth of Vietnam’s tourism and business sector combined with the current relative lack of long-haul capacity compared to other major ASEAN countries makes the Vietnamese market particularly appealing to Emirates.

Emirates will initially operate a daily flight between Dubai and Ho Chi Minh using 278-seat two-class A330-200s, resulting in 3892 weekly seats to and from Vietnam. This will immediately make Emirates the third largest carrier from outside Asia serving Vietnam. As a result, Emirates is poised to become one of the leading carriers in the Vietnam-Europe market, which is growing rapidly as Vietnam emerges as a major tourist destination.

Emirates is already committed to upgrading its Ho Chi Minh flight in late Oct-2012 to 427-seat two-class Boeing 777-300ERs, resulting in a 54% capacity increase to 5987 weekly seats. Qatar Airways, which operates daily 777-300ER flights to both Ho Chi Minh and Hanoi, is currently the leading non-Asian carrier with the most capacity to and from Vietnam. But all of Qatar’s flights are now routed via Bangkok (the carrier has steadily expanded capacity to Vietnam since initially launching services to Ho Chi Minh in 2009 but last year dropped its non-stop flight).

Turkish Airlines, which is currently the second largest non-Asian carrier serving Vietnam, also routes its daily Istanbul-Ho Chi Minh flight via Bangkok. As a result, Emirates will offer more non-stop long-haul capacity than any other foreign carrier currently serving Vietnam, which will give it an advantage on sixth freedom traffic because Qatar and Turkish do not have non-stop flights to their respective hubs. 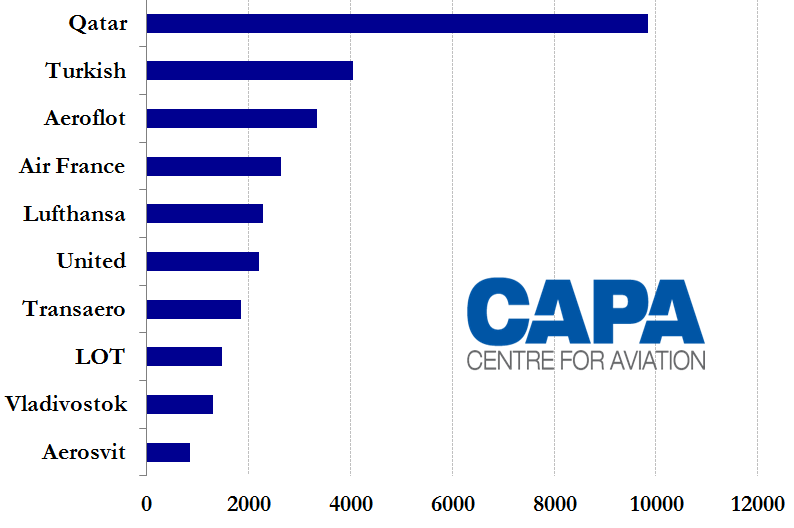 Emirates will primarily compete in the Vietnam-Europe market against Vietnam Airlines, Air France, Malaysia Airlines (MAS), Thai Airways and Singapore Airlines (SIA). The carrier will have a distinct advantage as it offers a wider variety of destinations in Europe than all of these carriers except Air France.

Air France, however, has higher unit costs and will need to continue allocating a large portion of its Vietnam-Paris seats to the local market. France is a big source of tourists for Vietnam and there is also significant business traffic between the two countries given their historical ties. Air France currently operates five weekly flights on the Ho Chi Minh-Paris route while SkyTeam partner operates three weekly Ho Chi Minh-Paris flights and a daily Hanoi-Paris service.

Lufthansa is the only other Western European carrier serving Vietnam but, like Qatar and Turkish, currently routes its three weekly flights to Ho Chi Minh via Bangkok, resulting in two stops for passengers heading to any European destination except Frankfurt. Lufthansa, Qatar and Turkish all have pick-up rights in Bangkok, which help ensure their Vietnam flights are viable. But the Bangkok stops will put these carriers at a competitive disadvantage to Emirates, which has decided against using the fifth-freedom traffic rights available under the new UAE-Vietnam bilateral and instead operate its Ho Chi Minh flights non-stop, resulting in faster connections throughout Europe.

In addition to Paris, Vietnam Airlines currently only serves three other European destinations: Frankfurt, Moscow and London Gatwick. (Frankfurt and Moscow are only served from Hanoi while London Gatwick, which was launched in Dec-2011, is served with two weekly flights from both Hanoi and Ho Chi Minh.) Additional European expansion for Vietnam Airlines is unlikely over the short-term because the carrier lacks long-haul aircraft and faces delivery delays on its future long-haul fleet.

Vietnam Airlines is concerned about the potential impact of Emirates, viewing it, according to a Vietnamese source, as “a five-star airline with three-star fares”. While Vietnam Airlines should be able to hold its own in the Frankfurt, London, Moscow and Paris markets, it will have a hard time competing with Emirates on price to other European destinations, where it primarily relies on connections via Paris operated by higher cost Air France. Most connections to Europe via Paris also require backtracking.

The Vietnam operations of MAS, SIA and Thai have already been significantly impacted by the rapid rise of low-cost carriers on short-haul international routes connecting Vietnam with other ASEAN countries, which has led to lower yields and a large drop in point-to-point demand for the full service carriers. SIA particularly has been impacted as Tiger Airways and Jetstar Asia each now have more seats in the Ho Chi Minh-Singapore market than SIA. Tiger now operates four daily flights on the route while Jetstar Asia last month increased its Ho Chi Minh-Singapore service to 27 weekly flights. SIA has seen its load factors drop in recent years on its two daily Ho Chi Minh-Singapore flights and could see a further drop, including in the important premium sector, as Emirates starts to compete aggressively with SIA in the Ho Chi Minh-Europe market.

SIA, MAS and Thai know the impact of Emirates all too well. While they have not been as vocal as non-ASEAN carriers such as Qantas Airways at publicly complaining about Emirates’ rapid expansion, the impact Gulf carriers have had in the ASEAN market is huge. Emirates in recent years has steadily expanded in Southeast Asia and now offers over 100,000 weekly seats in ASEAN.

Qatar Airways also offers over 60,000 weekly seats to, from and within ASEAN while Etihad offers over 30,000 seats. All three of the major Gulf carriers now serve five of the six major ASEAN markets: Indonesia, Malaysia, the Philippines, Singapore and Thailand. Vietnam, which has a population of over 90 million, has until now been dramatically underserved by the Gulf carriers. Only 5% of current Gulf carrier ASEAN capacity is currently allocated to Vietnam. 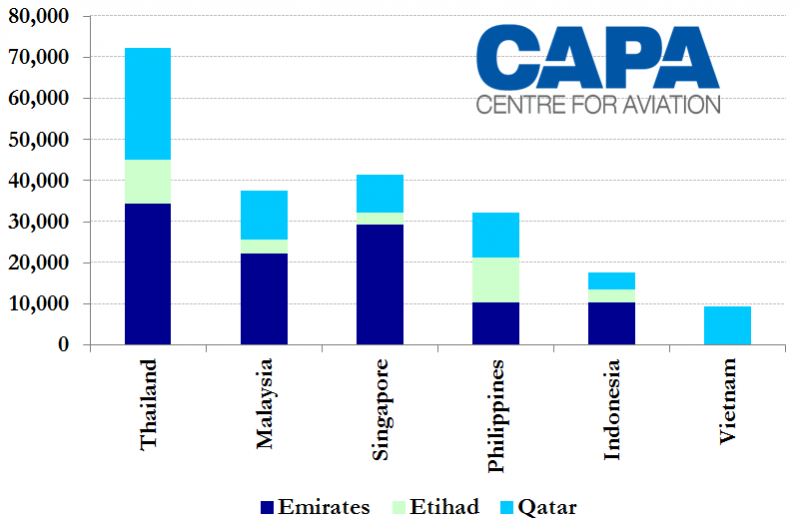 Emirates’ decision to launch services to Vietnam is hardly unexpected. As Emirates pointed out last week in its statement announcing the launch of Dubai-Ho Chi Minh, the carrier has been busy planning the route since Apr-2011, when Vietnam and the UAE signed an air services MoU. As CAPA initially reported in Apr-2011:

A new bilateral between Vietnam and the UAE will allow Emriates and Etihad to fill a big void in their Southeast Asian networks and start competing with rival Qatar Airways in an important fast-growing market. Vietnam is by far the biggest ASEAN country missing from the networks of Dubai-based Emirates and Abu Dhabi-based Etihad. Vietnam is a growing market for both leisure and business travellers originating in the Middle East as well as several destinations already served by Emirates and Etihad in Europe, Africa and the Americas.

The new Dubai-Ho Chi Minh flight is likely only the tip of the iceberg for Emirates in Vietnam. The carrier over the next few years will almost certainly expand in Ho Chi Minh, a huge rapidly growing city of seven million people that could potentially support A380 services.

Emirates, which briefly served Ho Chi Minh back in the 1990s, will also likely look to join Qatar Airways in Hanoi over the short to medium term. Even Da Nang, the biggest city in the increasingly popular tourist region of central Vietnam, could eventually attract Emirates. Da Nang, which last month opened a new international terminal, currently has services from five foreign carriers, two of which were just added (AirAsia and Asiana).

Emirates if free to serve all three of Vietnam’s major cities with multiple flights as the new UAE-Vietnam air services agreement allows full flexibility in terms of routes, capacity, number of frequencies and aircraft gauge. Fifth-freedom rights are also part of the agreement, giving Emriates the flexibility to potentially route some of its future Vietnam flights through Bangkok or other Southeast Asian cities.

Given the anticipated growth in the Vietnamese international market (IATA expects Vietnam to be the world’s second fastest growing international market over the next few years) and the rapid growth of tourism in Vietnam, the country should be able to soon support significantly more capacity from Gulf carriers. Vietnam could easily surpass smaller Malaysia – which currently has almost 40,000 seats per week from Emirates, Etihad and Qatar – as a larger destination for Gulf carriers.

It has not been easy for governments globally to put national interests ahead of those from their flag carrier, however much sense it makes. Vietnam was able to, and will benefit from it. The country needs carriers like Emirates to continue to grow its tourism sector and compete with other Southeast Asian destinations such as Thailand. The importance to the overall economy outweighs the potential impact on government-owned Vietnam Airlines. The flag carrier alone is also currently not equipped to keep up with the fast growing demand for long-haul services to and from Vietnam.

Emirates will allow Vietnam to increase efforts to bring in more traffic from Europe, the Middle East and Africa. Emirates will also be able to offer one-stop connections between the eastern US and Vietnam, an important and fast-growing market now only served by European carriers.

Vietnamese domestic carriers will also benefit as Emirates brings in more tourists. Several of Vietnam’s biggest tourist attractions are in central and north Vietnam, with domestic-only airports such as Hue and Haiphong serving as gateways to tourist attractions. The domestic market is currently served by Vietnam Airlines, regional carrier Air Mekong and low-cost carriers Jetstar Pacific and VietJet Air, which launched services late last month. Jetstar, given its stronger international brand, could particularly benefit as Emirates brings into Ho Chi Minh budget conscious travellers who will likely seek low fare flights to travel around the country.