A new bilateral between Vietnam and the UAE will allow Emirates and Etihad to fill a big void in their Southeast Asian networks and start competing with rival Qatar Airways in an important fast-growing market.

Vietnam is by far the biggest ASEAN country missing from the networks of Dubai-based Emirates and Abu Dhabi-based Etihad. Vietnam is a growing market for both leisure and business travellers originating in the Middle East as well as several destinations already served by Emirates and Etihad in Europe, Africa and the Americas.

Until now UAE carriers were not able to serve Vietnam because there was no bilateral agreement between the two countries. This was finally resolved last week with the signing of a memorandum of understanding which will allow designated carriers to operate an unlimited number of passenger and cargo flights between the two countries. Fifth freedom traffic rights will also be available, which Emirates and Etihad could use to tag Vietnam with some of their existing services to Southeast Asia. Qatar Airways, for example, routes most of its Vietnam flights via Bangkok.

The agreement was signed by representatives from Vietnam’s air transport department and civil aviation authorities of four emirates - Abu Dhabi, Dubai, Sharjah and Ras Al Khaimah. Carriers that have been designated in the new agreement include Vietnam Airlines and five carriers from the UAE: Etihad from Abu Dhabi, Emirates and flydubai from Dubai, RAK Airways from Ras Al Khaimah, and Air Arabia from Sharjah. It is unlikely the latter three carriers will serve Vietnam anytime soon because they are entirely narrowbody operators. But both Emirates and Etihad are likely to quickly launch routes to Ho Chi Minh and possibly Hanoi.

Vietnam Airlines may also consider launching flights to Dubai although Emirates and Etihad have more to gain from the new agreement because they can offer the multitude of connection markets which would likely be needed to sustain new flights between the UAE and Vietnam. Emirates and Etihad also have plenty of new widebody aircraft coming into the fleet to support network expansion.

The Vietnam-Europe one-stop market is particularly attractive given the growing business ties between Vietnam and Europe and Vietnam’s booming tourism sector. Currently Vietnam Airlines only serves three European destinations – Frankfurt, Moscow and Paris. Air France and Lufthansa are the only European carriers serving Ho Chi Minh while Aeroflot and LOT are the only European carriers serving Hanoi. There is also a lack of quick one-stop connections in the market as most travelers now have to transit in nearby Asian capitals such as Bangkok, Singapore or Kuala Lumpur, which do not offer the most direct routes to Europe. 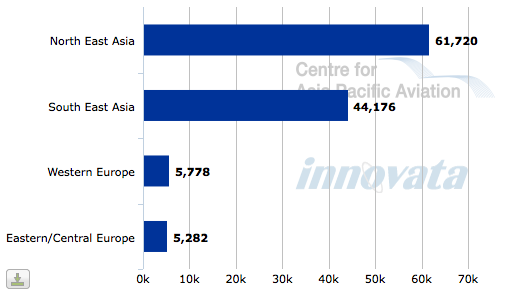 Two rivals of Emirates and Etihad, Qatar Airways and Turkish Airlines, are already participating in the growing Vietnam-Europe market. Turkish launched flights to Vietnam in Dec-2010 and is initially serving Ho Chi Minh City four times per week from Istanbul with a stop in Bangkok.

Europe is not the only market Emirates and Etihad will tap into when they launch services to Vietnam. The market between Vietnam and the eastern USA and Canada is also fast-growing and underserved. The local UAE-Vietnam market is also considerable. UAE is one of the biggest investors in Vietnam with total capital in ongoing projects of about USD3 billion.

In an extensive study of Emirates published by the Royal Bank of Scotland in Jan-2011, the bank predicted Ho Chi Minh would be a new Emirates destination by 2015 and Hanoi would be added by 2020. In commenting about the potential of Ho Chi Minh, RBS stated that “leisure traffic flows from Europe and the Mid East and business traffic from this fast growing economy should sustain a route to the commercial capital of Vietnam”.

Emirates and Etihad both now serve five destinations in the ASEAN region – Bangkok, Jakarta, Kuala Lumpur, Manila and Singapore. Of the big six ASEAN members only Vietnam is missing. The other four ASEAN members – Brunei, Cambodia, Laos and Myanmar – are much smaller markets with limited or no long-haul services.

The ASEAN region has so far been extremely successful for both Emirates and Etihad. Emirates over the years has steadily added capacity to the five ASEAN capitals it serves. Each destination is now served with at least two flights per day from Emirates’ Dubai hub. In addition, Singapore is linked with Colombo, Brisbane and Melbourne; Kuala Lumpur with Melbourne; and Bangkok with Sydney.

Younger Etihad also has added capacity on its ASEAN routes in recent years. Each ASEAN destination is served from Etihad’s Abu Dhabi hub one to two times per day.

Asia overall is a key region for both carriers with Vietnam representing the largest country and economy not currently served. Over one-quarter of Emirates’ 110 destinations are in Asia. In addition to the five ASEAN cities, Emirates serves four destinations in China, two in Japan, one in South Korea and 17 on the Indian subcontinent.

Etihad currently serves one destination in China, two in Japan, one in Korea and 16 in the Indian subcontinent. It has about 70 destinations worldwide.