After a few years of quiet operations, Gulf carriers appear to have finally caught the radar of US airlines, which are urging their government to re-consider its approach to open skies agreements. The US has open skies with the UAE and Qatar, home to the Gulf trio of Emirates, Etihad and Qatar Airways.

Unless US carriers have a strategic re-think of their competitors, antagonism towards Gulf carriers will surely grow. Emirates president Tim Clark told Reuters in Sep-2014 that Emirates aims to make the US its third largest source of revenue.

To do so, Emirates will likely need to increase its US capacity by 50-100% in the medium term. It may very well exceed that. The US comprised 7% of Emirates' revenue in 2013.

In an interview with Bloomberg (22-Sep-2014), Mr Clark said the US comprised 7% of Emirates' revenue. Emirates' official accounts do not break revenue by country but instead geographical region.

The US is grouped with Canada and Latin America in a general "Americas" category (data available since 2008; prior Americas was grouped with Europe). The Americas comprised 11.4% of Emirates' revenue in 2013/2014 (the year from 01-Apr-2013 to 31-Mar-2014). With the US comprising 7% of total revenue, we can deduce that Canada and Latin America account for approximately 4-5% of revenue. 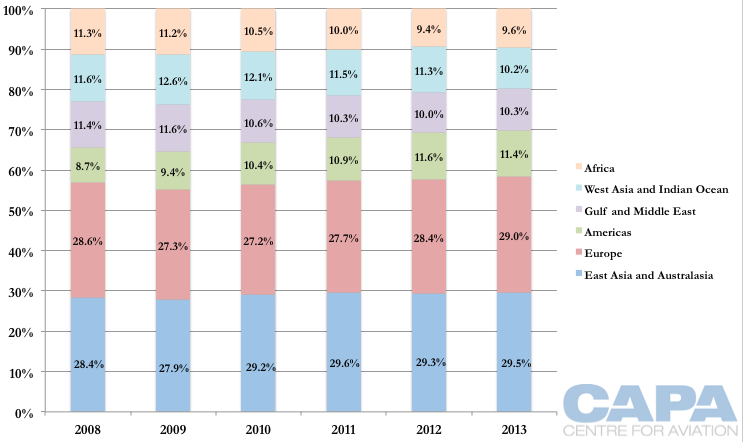 Source: CAPA - Centre for Aviation and Emirates
Note: For the year commencing 01-Apr

The Americas have increased their share of Emirates' revenue by about 3ppt, increasing from 8.7% in 2008 to 11.4%. But this comparison does not fully reflect Emirates' growth in America.

Emirates has more than doubled its Americas revenue from AED4 billion (USD1.1 billion) in 2009 to (USD2.5 billion) in 2013. The 3ppt gain of the Americas across Emirates appears less significant due to Emirates' overall growth across its regions. But with the Americas gaining share, it is evident Emirates is growing faster in the region than on average across its network. 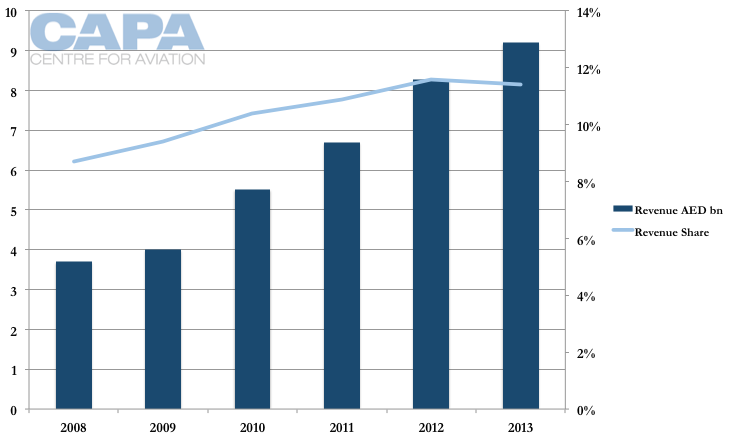 Source: CAPA - Centre for Aviation and Emirates
Note: For the year commencing 01-Apr

If we break the Americas category into the US (7%) and Canada/Latin America (4.5%), the third largest revenue source for Emirates becomes the Gulf and Middle East with 11.3%, based on 2013 figures. The Gulf and Middle East is not significantly ahead of Emirates' fourth largest region, West Asia and Indian Ocean, comprising 11.2% of revenue in 2013.

If we assume Emirates will broadly continue historical trends, it will need to increase US capacity by 50-100% to make the US its third largest revenue source. This assumes no changes in the current regional breakdowns except for the splitting up of the current Americas category into the US and Canada/Latin America.

It should be cautioned these figures are very general as predicting future growth can vary based on foreign exchange, geopolitical matters and air service agreements. India, for example, recently expanded its agreement with the UAE after much stagnation. But even when looking at Emirates' revenue share over the past six years – which includes the global financial crisis – changes in revenue have been subtle, a matter of 1-2ppt, aside from the growth of the Americas.

Even doubling US capacity seems conservative. Much growth could be added by up-gauging existing services or adding frequency to current destinations. New destinations will be possible, some now and some in the future as economies grow (foreign economies with faster growth will give rise to traffic flows) and later as next-generation aircraft permit services not possible with today's technology.

Strong prospects for JetBlue's partner revenue, unless another US airline comes along

The big three US carriers may object to the growth of Gulf carriers, but one quiet beneficiary is JetBlue, which receives onward traffic from all three Gulf carriers (and many other international ones). On the typical Emirates flight to JFK, over 25% of passengers connect to 70-80 destinations, according to Emirates divisional VP route development and economics, Anand Lakshminarayanan.

JetBlue is particularly important to Emirates as it, unlike Etihad and Qatar, does not have another US partner. Etihad and Qatar both have growing codeshare relationships with American Airlines.

Emirates has previously courted American. It thus makes it awkward for American to join more legacy-mindset Delta and United in asking the government to re-consider its approach to open sky agreements.

There does however start to be a limit to JetBlue's potential incoming revenue as Emirates and others reach cities that are not large JetBlue destinations. New York is the largest destination in the US for Emirates and Etihad (with twice the capacity to New York as their second largest US destination), and New York is also the hub of JetBlue. (For Qatar, New York ties with four other cities in size.) 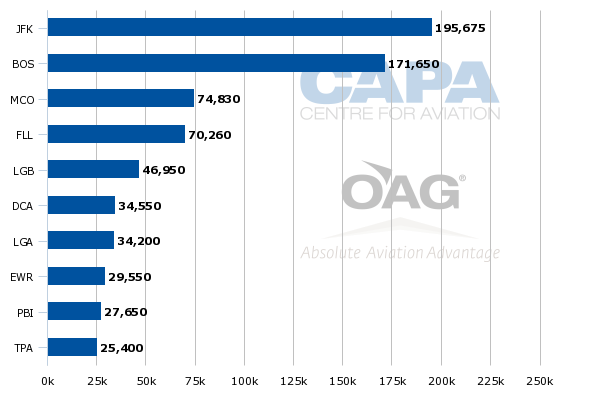 Other smaller US carriers will partner with the Gulf carriers (or, in the case of Alaska, already do). There also remains theoretical opportunity for Delta and United to partner, should they choose to.

US comprises 12-15% of capacity for Gulf airlines

Emirates' US capacity in 2013 was 10% of total capacity, slightly ahead of the 7% revenue figure. It should be cautioned seat capacity alone does not fully equate to revenue given the impact of cargo as well as new routes having a start-up period compared to Emirates' more established network elsewhere.

The US' share of capacity at Emirates and Etihad has been growing from about 8% in 2008. Qatar Airways has been on a different growth track, having a larger exposure to the US early last decade, when in 2009 the US accounted for 14% of Qatar's ASKs. Qatar has since been decreasing the US' share, although this has been the result of Qatar growing elsewhere in the world and not decreasing its US capacity. 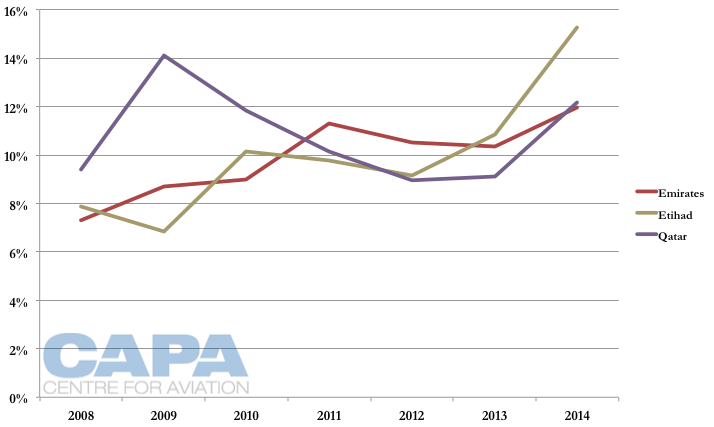 Gulf airlines serve 12 destinations in the US

Emirates is the largest in the US, by size and destinations (nine) followed by Qatar's seven destinations. Etihad's Dec-2014 launch to Dallas/Ft Worth will give it its sixth destination.

See related report: Airline invasion of the US: Gulf airlines extend into the west, Chinese airlines grow in the east

The growth of Chinese carriers is relatively straightforward as they bring passengers mainly from China but also elsewhere in Asia. The traffic profile of Gulf carriers however is not as single focused, but like the Chinese carriers they serve growing economies.

This confusion has perhaps led to claims by competitors that Gulf carriers are "stealing" traffic. In comparison, few airlines dare to publicly say that their Chinese counterparts are growing too much.

This is the first in a series of reports on the expansion of Gulf carriers in the US market. Future instalments will look at US carriers' claims about subsidies and contentions about fifth freedom flights, as well as examine where passengers are coming to and from on Gulf carrier flights.