The devaluation of the euro against the US dollar is improving the competitiveness of European manufacturers, with EADS and MTU Aero Engines lifting their expectations. Shares in EADS surged 6.1% yesterday, while MTU gained 5.7%. Also trading strongly was UK-based BBA Aviation, which gained 3.6%.

EADS CEO, Louis Gallois, is obviously pleased that Emirates has pushed its A380 orders up by another 32 aircraft, but is confident the strength of US dollar against the euro will boost sales for the company. 2010 revenue could be better than forecast earlier in the year, with the CEO expressing his belief that the exchange rate between the US dollar and the euro is now “reasonable”, and the devaluation of the euro has created a “level playing field” for EADS (and Airbus) to compete with American manufacturers, notably Boeing.

Meanwhile, MTU Aero Engines CEO, Egon Behle, announced that the engine manufacturer is seeing “some tailwind…from the dollar situation”, and revealed that the company may increase its 2010 outlook some time during the second half of the year. The stronger air traffic market outlook has also helped MTU’s buoyancy, with IATA recently revising its industry outlook for 2010 from a loss to a USD2.5 billion profit.

Outside of Europe, AAR Corp improved its outlook on results for the fourth quarter ending 31-May-2010 and updated its guidance for FY2011.

For the fourth quarter, the company now expects sales to “slightly exceed” the top of its previously disclosed range of USD355-365 million. Diluted earnings per share are now expected to be in the upper end of its earlier forecast of USD0.25-0.30 per share. Additionally, the company expects cash flow from operations to exceed USD50 million for the fourth quarter. For FY2011, the company expects sales of USD1.5-1.6 billion and diluted earnings per share of USD1.25-1.40. 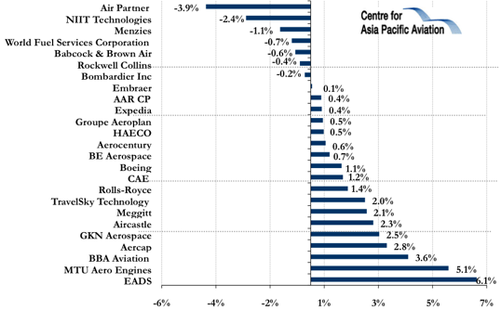