Embraer’s main competitor in the business and regional jet markets, Bombardier, is expected to make a decision on the extent of commercial aircraft production rate cuts in the next few weeks. A number of large order cancellations this year has put the manufacturer’s order backlog under pressure, and meant that Bombardier has registered only a small net gain in orders this year.

Embraer recently delivered its 600th E-jet (to LOT Polish Airlines), but cut production rates for the aircraft earlier in the year. Both manufacturers have commented recently that the downturn in the market for business jets has bottomed out, but are forecasting thin ordering in 2010 for both regional jets and business aircraft.

In the bigger end of town, an early resolution to the trans-Atlantic trade dispute over manufacturer subsidies seems increasingly unlikely, with the EU Envoy to Washington, Ambassador John Bruton, stating that the EU and US should wait until the WTO rules on the EU’s counter case against the US before any decision in made.

An amicable resolution to the dispute is still possible, according to the Ambassador, but requires “a time when everybody feels they can gain slightly more from a negotiated outcome than more litigation”. A past WTO dispute over aircraft manufacturing subsidies, between Canada and Brazil, resulted in tit-for-tat trade embargoes between the two countries.

The most immediate impact of the WTO ruling could come before the end of the week, when the US unveils the next round of its aerial tanker competition. Northrop Grumman and EADS are battling against Boeing for the USD35 billion contract. 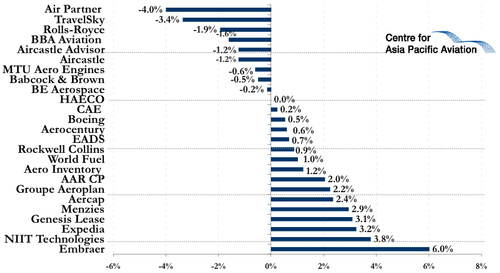