Embraer delivered 21 commercial jets in 1Q2010 and continues to see its order backlog shrink, despite confirming a large order over the weekend. Over 1Q2010, the value of the company’s order book declined by USD600 million from the end of 2009 to USD16 billion.

The Brazilian manufacturer delivered three E170s, one E175, 12 E190s and two E195s in the first three months of the year. Just one ERJ 145 was delivered, as production of the ERJ 145 family winds down. Embraer has a firm order backlog of just seven aircraft left for the ERJ 145, all with China's HNA.

Embraer also has 679 purchase options for the E190, although it has not revealed how many of these are still current. During 1Q2010, US Airways chose not to confirm five firm orders of the original 37.

Embraer’s order backlog may have shrunk, but the company slowed commercial aircraft production rates in 2009, so it still has a backlog of approximately two and a half years for the E170/E190 family. Order prospects are improving, as air travel recovers, with Austral Argentina confirming a firm order for 20 aircraft at the end of last week. Three of the 20 were already included Embraer’s firm order backlog for 1Q2010 as “undisclosed".

In trading on Friday, Embraer shares were down 0.2%, while fellow regional jet manufacturer, Bombarder, saw its shares fall 0.4%. EADS' shares gained 2.5% on news the company is considering another bid for the US aerial refueling tanker contract, while Boeing's shares were up 0.2%. 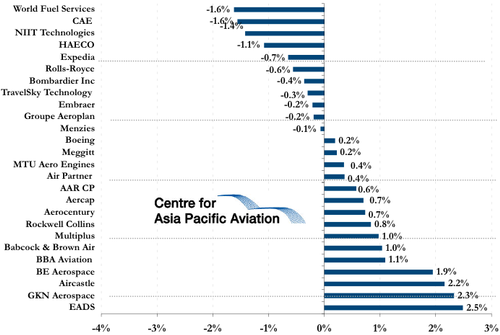