Embraer and Boeing up, EADS slides. MTU and Rolls-Royce down on weak Airbus order outlook

After posting strong gains on Wednesday, EADS' share price was unable to sustain its earlier upwards momentum, with shares sliding back 0.6% yesterday. At the EADS AGM, held earlier in the week, the company reiterated its forecast for flat revenue growth and a drop in EBIT for 2009, also stating that it is becoming increasingly difficult for its Airbus commercial aircraft unit to achieve its target of 300 orders for the year.

Next month’s Paris Air Show will be crucial for Airbus’ prospects of hitting its order target. The manufacturer reported more than 250 aircraft orders and commitments at last year’s Farnborough Air Show, and almost 730 at the 2007 Paris event. Such extravagant ordering will not be repeated this year, although some carriers with stronger cash balances could be ordering counter-cyclically.

MTU Aero Engines, which cooperates in consortia that supply the V2500 turbofans for the A320 and the TP400-D6 turboprops for the A400M, dropped 4.4% on Airbus’ pessimistic orders forecast. Earlier this year, MTU admitted responsibility for a major software error with the TP400-D6, which contributed to delays in the A400M programme. Shares in Rolls-Royce, which manufactures engines for both Airbus and Boeing, also fell, down 1.1%.

Boeing meanwhile has revealed five new orders for its B787 (due to commence flight testing next month), but has also received five cancellations for B767s in the past week. Orders and cancellations have both hit 65 for the year so far, effectively cancelling each other. Boeing’s share price was up 1.7% yesterday.

The majority of cancellations (57) have been for the new B787, while the majority of orders (42) have been for the narrowbody, and much cheaper, B737, sending the dollar value of Boeing’s static order book downwards. Boeing delivered 160 aircraft in the first four months of the year, while Airbus has delivered 162 aircraft (and taken a net 11 orders over the same period).

Embraer was back up yesterday, rising 0.9%, more than regaining the lost ground from small falls the day earlier. 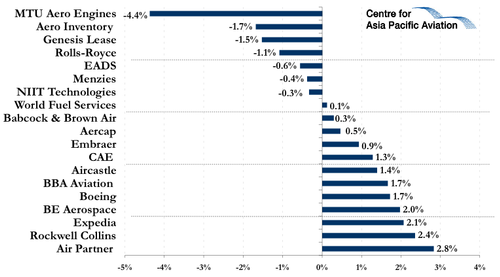