easyJet shares were up by 0.1% yesterday, on the same day that the LCC announced proposals to reduce capacity at Luton by 20% and to close its East Midlands base. The carrier plans to move capacity to more profitable airports and redeploy most of the aircraft to Continental European bases.

easyJet, however is maintaining its overall growth plans of approximately 7.5% p/a over the medium term. According to CEO, Andy Harrison, “easyJet is a pan-European airline, winning market share right across Europe, as demonstrated by another strong traffic performance in August. We are one of only a few airlines expecting to make a profit this year. A critical part of our success has been optimising the allocation of our aircraft across our 19 European bases. This means responding to airports with uncompetitive costs, as well as moving swiftly to seize opportunities as competitors retreat.”

easyJet transported 4.8 million passengers in Aug-2009, a 4.7% year-on-year improvement, while load factor gained 0.5 ppts to an impressive 91.8%. Ryanair, whose shares gained 1.8% yesterday, grew at an even faster rate, with passenger numbers up 19% to 6.9 million passengers, with an unchanged load factor of 90%.

In the Americas, WestJet was down 0.7% yesterday. The carrier, upon the release of its Aug-2009 traffic results, stated that while it remains “encouraged” by talks of an economic upturn, it remains “cautious about a recovery”. But the carrier added that 3Q2009 revenue per available seat mile (RASM) is tracking to an anticipated decline of 16-18% year-on-year. 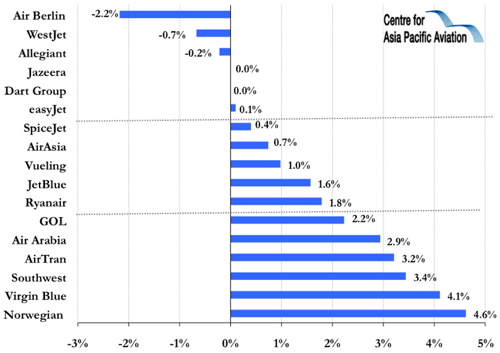