Shares in easyJet and British Airways (BA) rose 1.9% and 3.3%, respectively, yesterday (in a stronger overall market), despite moves by the UK Chancellor of the Exchequer to increase the Air Passenger Duty (APD) on flights from the UK by up to 112%.

With the economy facing a 4.1% contraction this year, the British Government has handed down a very tough budget.

BA’s CEO, Willie Walsh, stated the APD was doubled two years ago, “making air travel from the UK the most heavily taxed in the world”. He added the government “seemed determined to pile yet more misery" on airlines and passengers.

Ryanair meanwhile held onto Tuesday’s strong gains on Michael O’Leary’s comments that the carrier would report a substantial increase in profit over the next 12 months. The carrier’s shares rose 3% yesterday.

On a “lighter” note, the LCC yesterday announced it will now consider how to charge a ‘fat tax’ after more than 30,000 passengers voted in favour of charging excess weight fees for very large passengers in an online vote over the past two weeks. Over 100,000 passengers voted online to decide which cost reduction idea should win a EUR1,000 cash prize. Ryanair confirmed the final poll results as follows:

Ryanair stated it will now consider how to implement such a charge and asked passengers to vote, via www.ryanair.com, on which format the charge should take: 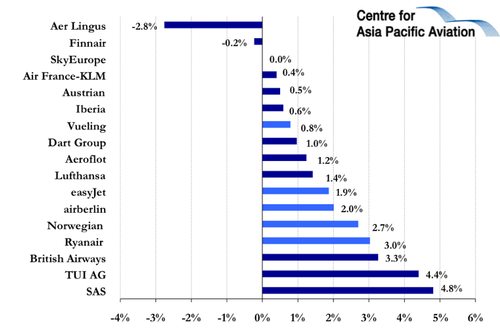