EADS shares jumped 3.5% in trading yesterday, recovering much of the ground the shares lost last week. The company has been upgraded from hold to buy by Citigroup, which expects deliveries at the manufacturer to remain flat to 2012.

Also bolstering EADS was news that European politicians have called for talks to resolve the ongoing trans-Atlantic trade dispute centered on EADS subsidiary Airbus, and US manufacturer Boeing. The long-running dispute over subsidies is currently playing out another chapter at the World Trade Organisation.

The WTO ruled on the US case against Europe and Airbus earlier in Mar-2010 and the organisation is now considering the European counter case against Boeing. While the ruling has not yet been made public, both sides came out claiming victory.

The US is insisting that Europe remove all “WTO-inconsistent subsidies to civil aircraft”, according to US trade representatives speaking to AFP. European trade negotiators have requested that negotiations take place “without preconditions”, in an attempt to settle the dispute. US trade officials have already requested that European Governments not provide the EUR3.3 billion in launch aid already promised for the EUR12 billion A350 XWB programme.

EADS is also looking to re-enter the USD35 billion US Air Force aerial tanker competition, but is facing intense political pressure from the US. Several US law-makers are lobbying to have the EADS/Airbus entry, based on the A330, pushed out of the competition due to the subsidy issue.

Other aircraft manufacturers were mixed in trading yesterday. Embraer lost 0.7%, while Bombardier was flat and Boeing was up 0.6%. 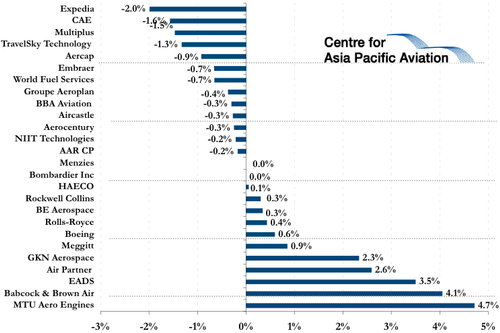