EADS shares slammed as it abandons US defense acquisition

Shares in European aerospace group, EADS, were sold off sharply (-7%) on 14-Jan-09, after it abandoned a significant defense acquisition in the US in a bid to conserve cash amid the financial crisis.

EADS faces new provisions for delays to the A400M military airlifter and stated it is under pressure to offer finance to airlines to defend its delivery schedule in 2009. Holes are opening up in production lines as airline defer or cancel deliveries. Gulf Air CEO, Bjorn NAF, told the Financial Times that it has been able to bring forward initial deliveries of A320 aircraft by two years to late 2009, as other airlines defer their deliveries. Mr Naf stated, "six to seven months ago we were fighting to get them earlier, but there were no production slots available". 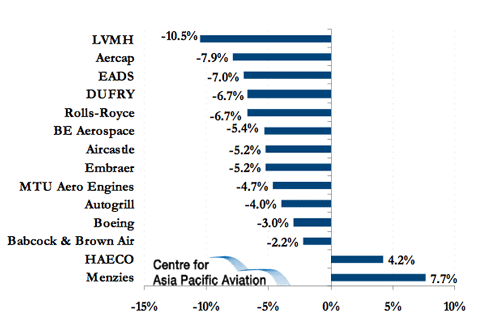