EADS shares dropped 3.8% on Tuesday, as the European aerospace manufacturer announced a reshuffle of its military arm, Airbus Military, in response to the long-running delays with its EUR20 billion A400M military transport programme.

A new chief engineer, Miguel Angel Morell, has been appointed to help restore the A400M programme. EADS has promised a maiden test flight for the aircraft before the end of 2009. Mr Morell has a strong background in military programmes. He was previously head of engineering for the conversion of the A330 for the US aerial refueling tanker competition (which is due to re-open shortly). EADS has also appointed new Strategy and Communications heads for the military unit.

Meanwhile, the Airbus commercial aircraft unit has denied media reports that it plans to outsource 20% of its engineering and design work to countries with lower cost bases, predominantly India, as well as China and Russia, by 2012. The company stated that the EADS Vision 2020 plan, launched in Jan-2008, could ultimately see up to 20% of Airbus work subcontracted globally, but this is “nothing new”.

More reports have emerged that the CEO of ILFC, Steven Udvar-Hazy, could slice off a small fraction of ILFC’s portfolio of more than 1,000 aircraft to start his own aircraft leasing business.

Mr Udvar-Hazy founded ILFC in 1973, and sold it to AIG in 1990. However, he has reportedly been attempting to purchase some of the company back from AIG since 3Q2008. AIG has been unsuccessful in finding a buyer for the company, as the combination of the company’s large debt levels, and globally declining aircraft valuations, have proved a significant deterrent.

Any sale would be relatively small, reportedly less than 10% of ILFC’s portfolio of approximately 1,000 aircraft, and is expected to be completed within the next two months. With the values and lease rates of older aircraft types falling (particularly narrowbody aircraft), due to falling passenger traffic and airlines grounding aircraft, ILFC is unlikely to achieve the book values of the aircraft.

Airlines returned several grounded aircraft to their fleets over the peak Summer period, but the upcoming Winter schedule will probably see another wave of groundings, as carriers pull back their capacity to deal with the seasonally weaker period. 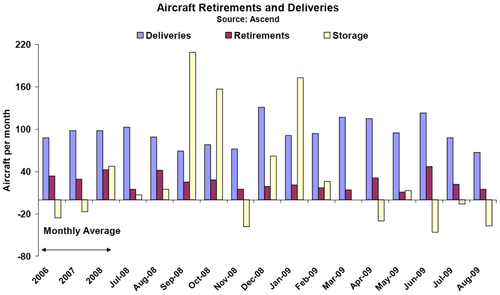 The aircraft sale would provide a boost for AIG, which has been selling off non-core assets as part of its restructuring programme and repayment of USD80 billion in US Government aid. ILFC’s own outlook for the next 21 months is relatively dour. The company commented in Jun-2009 that it is seeing financial stress to varying degrees across the airline industry, largely precipitated by recent volatility in fuel costs, lower demand for air travel, tight credit markets, and sluggish economic conditions.

As of Jun-2009, 22 ILFC customers operating 109 aircraft were two or more months past due on USD80.6 million of lease payments (compared to just seven customers in arrears in Jun-2008). With the oncoming Northern Winter period likely to be another trying time for airlines, ILFC may be eager to shrink its portfolio.

ILFC’s saving grace at the moment is that it is taking delivery of (relatively) few aircraft. In 2H2009, it will receive only eight new aircraft. Furthermore, the company’s purchase commitments from 2010 to 2019 for future new aircraft deliveries are at “historic lows”, granting it some breathing space in the downturn. ILFC currently has orders for 128 aircraft from Airbus and Boeing.