Only London Heathrow Airport remains a bigger hub for international traffic. Given the pace of traffic growth in Dubai, the capacity constraints at London Heathrow and the dithering by UK authorities about runway capacity in southeast England, it is only a matter of time before Dubai becomes the world’s largest international passenger hub.

Dubai Airports believes DXB can take the top spot by the end of 2015.

Record traffic and capacity growth for Dubai in 2012

In 2012, Dubai handled just under 57.7 million passengers, making it the fourth largest airport by international traffic, after London Heathrow, Paris Charles de Gaulle and Hong Kong. In Jan-2013, the airport handled a record 5.6 million passengers, taking it past Hong Kong. In Feb-2013, the airport handled 5.1 million, taking it past Paris CDG in terms of international passenger traffic. 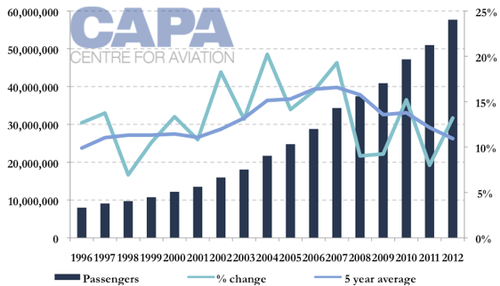 Traffic has doubled at DXB in less than seven years while seat capacity has almost tripled since 2004. The airport is projecting traffic of 65.4 million passengers for 2013, an addition of 7.7 million passengers over last year. Traffic at the airport has already outstripped Dubai Airport’s 2010 projections and is now close to 10 months ahead of estimates. 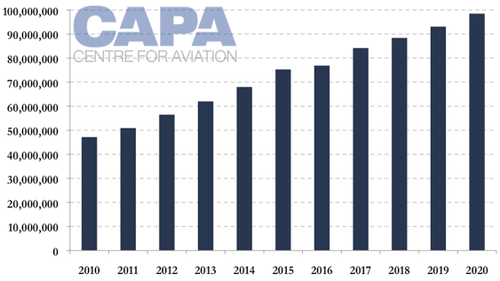 Traffic at DXB is among the fastest growing in the world and is especially notable given the almost complete absence of a domestic market in the UAE. Of the largest airports in the world, DXB has added the third most number of passengers after Beijing Capital Airport and Jakarta International Airport, both of which benefit from exceptionally rapid domestic travel growth.

In the past five years, annual passenger traffic has increased at DXB by nearly 20.4 million, vastly outstripping the growth at more traditional international travel hubs, even in Asia-Pacific. 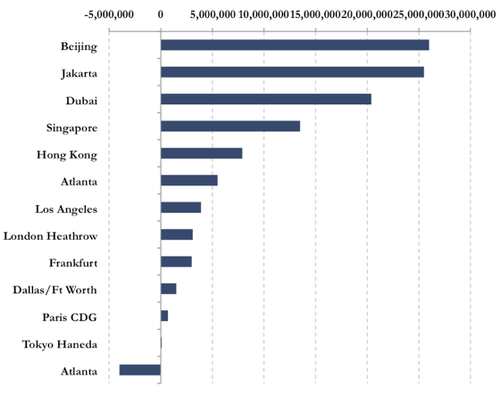 Without a domestic market to fall back on, development at Dubai is supported by its favourable geographic position for air travel: the airport’s position in the Middle East puts it within easy reach of most major global cities outside of the Americas and within eight hours flying time of two-thirds of the world’s population. Dubai lies at the heart of a global travel nexus, linking Asia-Pacific to Europe and Africa.

The airport and the Emirate are also benefitting from the global shift of economic power to the east. The airport is seeing not only more passengers, but increased freight coming from the fast-developing nations of Asia-Pacific and increasingly from Africa. 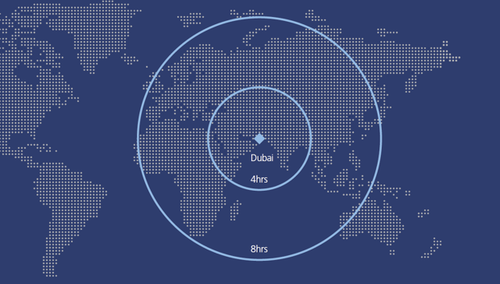 Dubai has also seen an upside from the social and political stability of the UAE. While travel and tourism in much of the region suffered in the aftermath of the Arab Spring, the UAE has witnessed an increase in business and tourism traffic. Tourism trade in Bahrain, Oman and Egypt is still significantly down on pre-crisis levels, while UAE tourism visits rose 9% in 2012.

There is also Dubai’s beneficial regulatory environment. Dubai Airports chairman is Sheikh Ahmed Bin Saeed Al Maktoum. He also happens to be president of the Dubai Civil Aviation Authority and chairman and CEO of Emirates, the state-owned carrier.

Dubai’s ruling family aims to ensure long-term prosperity by turning the emirate into a business and transport powerhouse similar to Singapore or Hong Kong, and has aligned its regulatory structures accordingly. The strategy has been working: in 2010, aviation directly and indirectly accounted for 22% of Dubai’s GDP. That figure is expected to reach 32%, or higher, by 2020.

Dubai also has two of the world’s fastest growing carriers calling it home. Emirates is already the world’s largest airline by international ASKs and possibly its most ambitious. DXB will eventually be home to 90 A380s operated by the airline, not to mention the vast array of smaller widebodies such as 777s and A330s, as well as the next generation widebodies it has on order.

According to OAG data, DXB has seen the greatest absolute increase in capacity of any airport globally between Apr-2012 and Apr-2013, adding 757,000 seats. Emirates was responsible 61% of this increase. 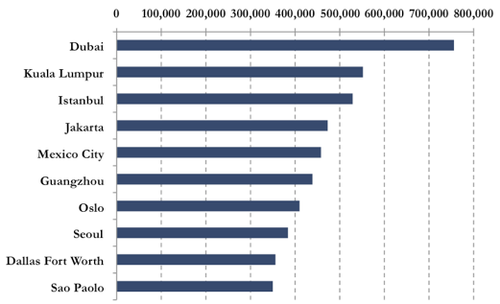 flydubai also calls DXB home. Like Emirates, the carrier is state-owned and has major development plans. Launched in 2009, the carrier has already surpassed Air Arabia as the largest LCC in the Middle East (based on seat capacity). flydubai ordered 50 737-800s when it launched, and is now considering another order for 50 narrowbodies, to continue its expansion into South Asia, Eastern Africa and Eastern Europe.

Outside of the home carriers, Dubai Airports has not been idle in attracting business from airlines. More than 155 carriers fly into the airport, operating to 220 global destinations, making Dubai the most internationally connected city in the world.

Qantas became the latest new carrier serving Dubai, moving the stop of its Melbourne and Sydney to London services from Singapore to Dubai on 31-Mar-2013. Qantas is now partnered with Emirates, improving the outlook of both carriers as well as further boosting Dubai's position as a major intercontinental hub.

The threat from within

Just 15km away from Dubai International Airport is one eventual threat to its supremacy: Al Maktoum International Airport. The airport is a part of the massive Dubai World Central airport city and self-sustained economic zone project, aimed at meeting Dubai’s aviation, tourism, commercial and logistics needs all the way through to 2050. Upon completion, Dubai World Central will become the world’s largest airport, boasting five runways and an ultimate capacity of 160 million passengers and 12 million tonnes of cargo p/a.

In comparison Dubai International Airport has just two runways and capacity for 75 million passengers p/a. Development under DXB’s SP2020 master plan calls for an expansion to 90 million passengers p/a by 2018. Work on the new Emirates-dedicated Concourse 3 was completed in late 2012, giving it some breathing room while it sorts its capacity expansion.

The new airport is now due to open to passenger traffic operations in Oct-2013, a move that will naturally divert some traffic away from DXB. Low-cost carriers nasair and WizzAir have announced that they plan to shift some flights to the new airport, and other carriers are sure to join them. The airport’s new facilities, 24-hour operations and lack of congestion compared to DXB offer significant incentives for a move.

In 2010, Dubai Airports reworked its strategy, keeping the focus on developing DXB at the expense of the new airport. Eventually, all foreign carriers operating into Dubai will shift to the new airport, leaving DXB to Emirates. Emirates is also expected to eventually shift its operations to Al Maktoum. However, with the development at DXB capable of absorbing the increase in traffic at present, the airline doesn’t expect it will move for more than a decade.

The threat from outside

While Dubai plans to play home to the biggest airport in the world, its aspirations may be eclipsed by an even more ambitious project in China, in the form of Beijing’s proposed new airport.

With the existing Beijing Capital International Airport already operating above its design capacity, and sustained double-digit growth in domestic and international travel in China forecast to continue for another decade, the Chinese capital desperately needs a new hub airport. China has announced plans for the new ‘Beijing Daxing International Airport’, located around 50km south of the city centre. Details about the project are still to be finalised, but initial operations are scheduled to commence from 2017.

With China’s domestic travel market expected to increase from 320 million last year to more than 700 million by 2020 and 1.5 billion by 2030, the intention is for the airport to predominately handle domestic flights. This frees up Beijing Capital to handle more international flights and passenger traffic.

Beijing Capital could possibly become a dedicated international hub for Beijing although it would be logical to maintain some domestic flights for connecting passengers. The airport handled 81.9 million passengers in 2012 – nearly 25 million more than Dubai – and is expected to handle more than 85 million this year.

DXB is the fastest growing airport for international passenger traffic and capacity, and the ambition of Dubai is to keep it that way. While the hubs of Europe struggle with capacity constraints and the Asian hubs lag in terms of international traffic growth, DXB remains ahead of the curve.