COVID-19: Brazil’s aviation market will shrink after the pandemic

The largest domestic airline in Brazil, GOL, believes that Latin America’s largest aviation market could potentially be smaller for some time after the pandemic ends, and that the crisis will force some airlines in the market to behave more rationally with capacity growth. For now, GOL is operating a skeleton schedule and has parked more than 100 aircraft. The airline also believes its planned international expansion will be delayed for some time.

GOL’s competitor, Azul, which has also parked more than 100 aircraft, hopes to resume close to a normal operating schedule in Jul-2020, but as the crisis drags on it can only be speculated when any sense of normality will materialise.

Unlike some Latin American countries, Brazil has not totally shut down its domestic air routes. Instead, its airlines are operating bare bones schedules to keep an essential network in place.

GOL and its rival Azul have both cut their capacity by 90%, and data from CAPA and OAG show that for the week of 20-Apr-2020, Brazil’s domestic ASKs will fall 89% year-on-year, before being planned to climb again in early May-2020. 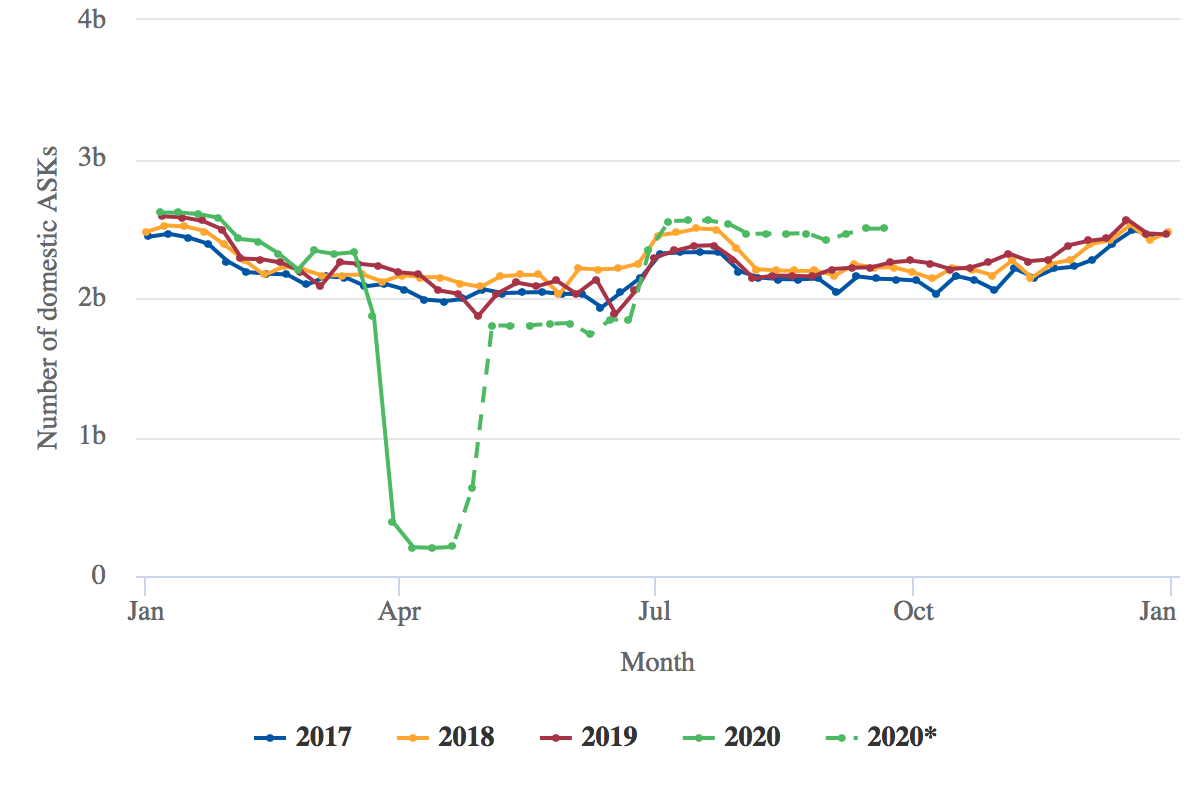 * These values are at least partly predictive up to 6 months from 13-Apr-2020 and may be subject to change.

In early March, before the effects of the COVID pandemic quickly wiped out air travel demand worldwide, GOL was operating approximately 750 flights per day.

The airline has parked more than 100 of its Boeing narrowbodies, and CAPA’s fleet database shows that GOL is operating just 10 aircraft.

GOL CEO Paulo Kakinoff recently stated that the airline is expecting to maintain that diminished schedule until early May.

Recently, GOL’s domestic competitor Azul has cut its capacity by 90% from March 25 to April 30 and is operating 70 nonstop flights to 25 cities. Azul has stated that it hopes to resume close to a full operating schedule by July.

CAPA’s fleet database shows that Azul has parked 124 aircraft and has just 30 in service.

Azul fleet summary as of mid-Mar-2020

Azul executives have remarked that the company believes the COVID-19 crisis will be a “two-to-three month problem”, but they have also acknowledged that the crisis could last longer.

However, Azul has also said: “We are actually starting to see governments kind of change tune a bit and realize that you can’t have a full shutdown for too long because it would be disastrous to the economy”.

GOL has essentially reduced its network to 10% of what it was before the crisis, and Mr Kakinoff explains that “automatically, we have also dropped our variable costs down to that same level”. The airline has also taken measures to slash its fixed costs, including a 50% reduction in its payroll and the deferral of lease payments.

Brazil lost one of its major airlines in 2019 when Avianca Brazil, which at one point had domestic passenger share of 15%, ceased operations. The country’s remaining airlines largely backfilled Avianca Brazil’s capacity.

At one point in 2019 GOL expressed some concern about domestic capacity growth, but as the year came to an end the airline concluded that Brazil’s domestic growth in 2020 would be rational.

Obviously the COVID-19 crisis has wiped out any previous projections for industry growth, and there is no certainty when – or if – demand will reach its pre-crisis levels. GOL, according to its company CFO Richard Lark, believes that Brazil’s market “on the other side of this” could potentially be smaller for a period of time.

GOL does not believe that the COVID-19 pandemic will trigger any consolidation in Brazil’s market, but Mr Kakinoff has stated that a possible positive outcome of the crisis is that there could be “lessons learned by some players in the market...now you can see how toxic an overcapacity approach can be.”

GOL is also adjusting its expectations for international expansion. At one point, the airline was planning to grow its international business to 25% of its total operations during the next couple of years. But obviously those plans will change; as stated, there continues to be uncertainty about when demand patterns will warrant the addition of new international routes.

Brazil’s passenger growth was just 1.7% in 2019, after 3.3% growth in 2018. The country’s economy was starting to grow after a recession in the middle of the past decade.

But now the country’s government has forecast zero economic growth for the country in 2020, and it is likely that a contraction could occur.

Even if Brazil’s airlines do resume close to normal schedules in 1H2020, they will likely need to stimulate demand with much lower fares, because Brazilians will monitoring their discretionary spend due to a shaky economic environment.

There is also the general and continuing apprehension about travel created by COVID-19, and it could take some time for the population to get comfortable travelling again.

Brazil is not the only market that will emerge smaller in a post COVID-19 world. There is little evidence that demand will reach any type of normal level until late 2021 or 2022, and the result will be that airlines will need to adapt to their new operating reality.

Brazil’s market was largely rational prior to the onset of the crisis, but its airlines will need to resize their operations in order to maintain the ideal balance of supply and demand.