United, Continental, Southwest, JetBlue and US Airways all reported double-digit unit revenue increases in Jul-2010. Growth was above 15% across the board in the month, which was also characterised by strong load factors, reflecting continued careful capacity management.

Southwest Airlines stated passenger revenue per ASM for Jul-2010 is estimated to have surged between 17% and 18% in Jul-2010 for the 11th consecutive month of PRASM growth for the carrier and the seventh consecutive month of double-digit PRASM growth. The increase compares with a 5% RASM reduction in Jul-2009. (Southwest did not provide monthly PRASM breakdowns in 2008). 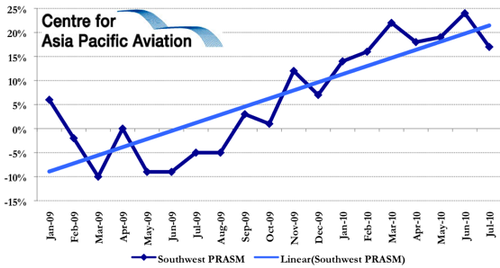 The carrier separately commented that its outlook has improved drastically in Jun-2010 and Jul-2010, with “strong” demand and revenue growth expected in the third quarter and the full-year. However, the carrier warned: “Our year-over-year growth rates will face more and more difficult comparisons, of course, due to the rapid revenue recovery that began at Southwest a year ago. Each of the three years preceding 2009 experienced more normal seasonal trends and provide a better gauge of second half 2010 potential revenue health."

CEO Gary Kelly has also cautioned it could take "several years" for business travel demand to recover from the "terrible" year in 2009, in which business travel took a “huge hit”. He added that the carrier's results have improved in 2010 compared with 2009 levels, stating: "The domestic airline industry is in much better shape now than it was a year ago."

Allegiant, which has now provided monthly revenue updates for the past two months, estimated that Jul-2010 scheduled revenue per ASM increased between 3.85% and 4.15% in the month, with an estimated year-on-year increase in scheduled total revenue per ASM (TRASM) of between 3.55% and 3.85%.

Also among the LCCs, AirTran Airways (which does not provide monthly yield updates), upon the release of the carrier’s financial results for the three months ended Jun-2010, stated: “Tight cost controls, combined with prudent, long-term financial management, have enabled the company to bolster its financial health while experiencing a significant revenue recovery."

The positive trend is expected to continue, with the LCC anticipating PRASM and TRASM growth of 14.5-16% and 12.5-14.5% in the third quarter. 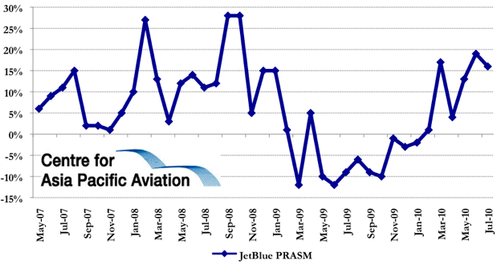 On a 12-month moving average, JetBlue’s PRASM has seen an uptick in the past few months. 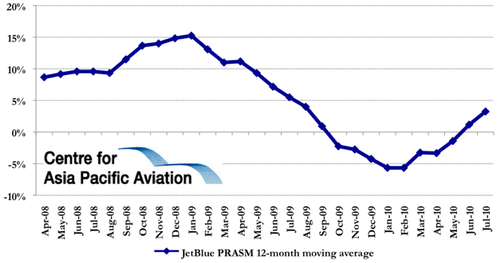 JetBlue reported a 8.2% year-on-year increase in yield to USD 11.93 cents in the second quarter, while PRASM and RASM increased by 11.7% and 10.4%, respectively to USD 9.78 cents and USD 10.81 cents.  The carrier previously stated it was expecting 2Q2010 PRASM and RASM to increase in the 6-9% range, meaning the carrier exceeded its forecast quite considerably in the quarter.

JetBlue, upon the release of its second quarter results, stated it was “encouraged” by the strengthening revenue environment, with the carrier expecting a third quarter PRASM increase of 12-15%, with an anticipated RASM increase of 11-14%.

Among the network carriers, United Airlines reported an estimated increase in consolidated passenger revenue per available seat mile (PRASM) of 22% to 23% in Jul-2010, for the seventh consecutive month of improvements. Consolidated PRASM is estimated to have increased 3.9% to 4.9% in the month compared with Jul-2008 levels, of which approximately 2.0 ppts is due to fees and other ancillary revenue. 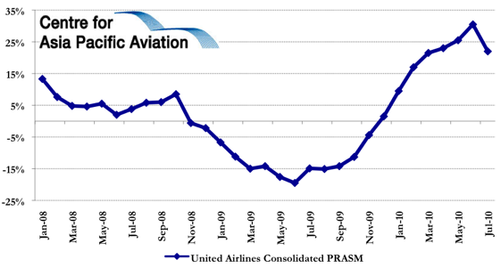 United Airlines, in its second quarter financial report, reported a 19.1% increase in domestic PRASM, with consolidated PRASM gains of 26.9% in the period.

UAL Corp Executive VP and CFO, Kathryn Mikells, said: "We are clearly on the right path toward our goal of achieving sustained and sufficient profitability across the economic cycle. While there is much more work needed, our current results, including improvements in unit revenue, cost controls, cash flow and profit margin, demonstrate substantial progress against our objective." 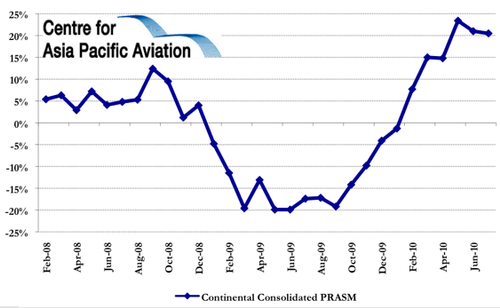 The two-year change was also favourable for the month, with the 20%+ plus growth over the past two months comparing with reductions of 20%. 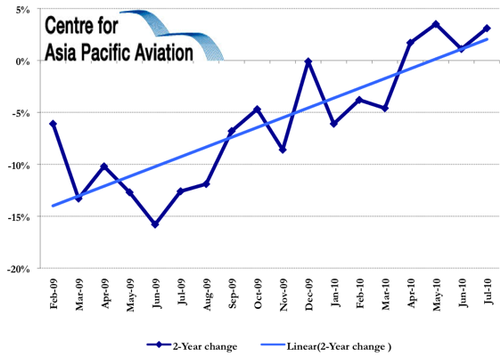 US Airways, meanwhile, stated its consolidated (mainline and Express) PRASM increased approximately 16% in Jul-2010, while total revenue per ASM increased by approximately 17% in the month.  US Airways President Scott Kirby commented that the improvement was “largely driven by continued year-over-year strength in business demand and yield".

The carrier previously stated that yields bottomed in May-2009/Jun-2009, as the pricing environment “gradually improved” over the northern summer. The carrier added that the more positive yield data from Nov-2009 onwards coincided with “less aggressive” fare sales, the cancellation of so-called junk fares and “surcharges”. 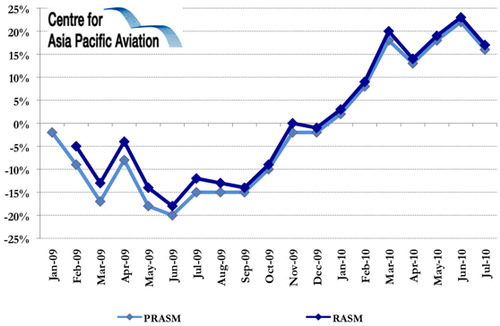 The carrier commented that the improvement was driven by higher passenger yields due to an improving economy resulting in greater demand for business travel.

While Delta Air Lines does not provide unit revenue data, the carrier, in its second quarter financial release, reported a 14.1% increase in domestic unit revenues and a 14.2% increase in yields in the three months to Jun-2010,  with a unit revenue increase of 19.4% and a yield increase of 16.7% to USD 11.94 cents and USD 14.05 cents, as strong growth in business bookings and yields continues into early summer.

Delta President, Ed Bastian, stated: "We are seeing strong improvements in these early stages of the economic recovery and believe there's room for more revenue growth as the economy continues to stabilise. We anticipate double-digit year over year unit revenue gains for the September quarter."

Meanwhile, all of the US major airlines which had reported Jul-2010 traffic results as at 10-Jul-2010, with the exception of Southwest Airlines and AirTran, reported load factor reductions in the month. Comparatively, in previous months most of the US airlines reported load factor improvements. Load factors among the major US network airlines, however, were strong in the month, all in the 85% to 89% range, while load factors among the LCCs ranged from 84% to 89%.  The US network carriers have pared back capacity so much that they are now consistently operating with higher load factors than their point-to-point LCC competitors.

As is usually the case, Southwest’s load factors remained the weakest among the major US airlines in Jul-2010, but the LCC is working hard in this area, with the carrier load facto rof 84.9% in the month representing a record monthly load factor performance for the company. 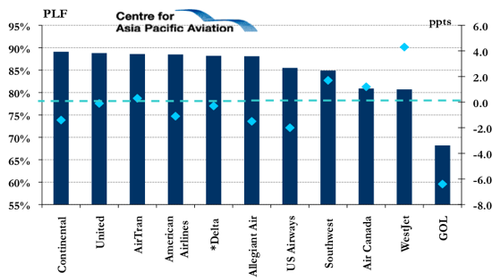 During the month, all of the major network carriers reported either capacity reductions or marginal capacity growth (of under 1%), with the LCCs reporting capacity increases, led as always by the smaller Allegiant among the US carriers. 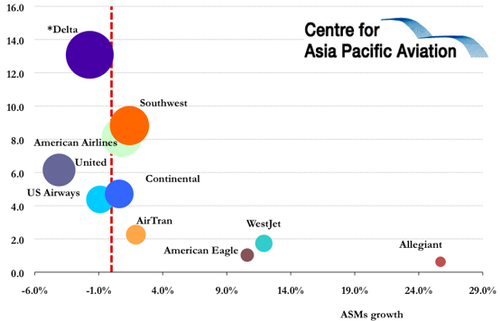 The trend was similar for traffic (RPMs) growth in the month. 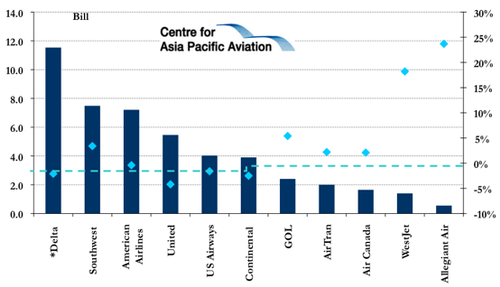 Looking at the industry-wide trend, the Air Transport Association of America (ATA) reported that passenger revenue, based on a sample group of carriers, rose 25% in Jun-2010, marking the sixth consecutive month of revenue growth. For the 12 months ended Jun-2010, passenger revenue was approximately 0.5% above calendar year 2000 levels.

Approximately 1.4% more passengers travelled on US airlines during the month while the average price to fly one mile rose 20%. International passenger revenue rose 38% led by a 58% gain in trans-Pacific markets.

ATA President and CEO, James May, said growth in passenger revenue in the month makes it “clear” that the “recovering US economy is enabling airlines to dig out from the very deep hole of a year ago”, adding that the double-digit growth reflects “marketplace optimism”. 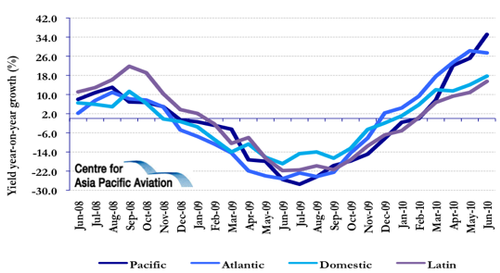 On a 12-month moving average, yields also appear to have stabilised and being moving in the upwards direction. 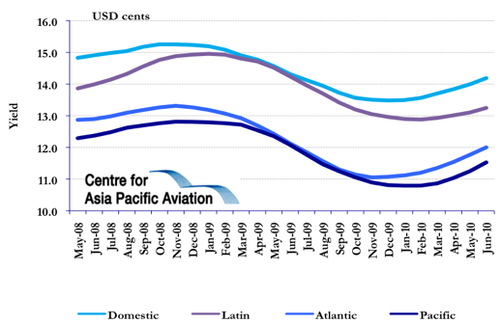 Meanwhile, the ATA commented that while airfares, in 1Q2010 increased by 4.7% year-on-year basis, they have returned to 1999 levels, with the average one-way fare standing at USD153.88. ATA added that “compared to 2008 pre-recession levels, fares grew only 0.4%, easily trailing the 2.3% jump in the US Consumer Price Index during that same period”.

Mr May noted that while airfares appear to be stabilising, the airline industry has been in serious distress throughout the past “lost decade”, adding: “This is a positive sign for recovery, not just in the airline sector but across the broader economy as well."

See related article: US air fares still a bargain, despite increases. The 'lost decade' for US airlines

A reasonably positive picture was painted with the release of the US carriers’ second quarter financial results earlier this month. Demand and revenue trends are moving in the right direction, although the strength of the underlying US economic recovery is still unclear. More observers are now talking about the prospects of a 'double-dip' recession, as unemployment remains stubbornly high. The current peak season should be a good one for airlines, as capacity remains tight, but the real test will come after the summer peak.