Spain is Western Europe's biggest domestic airline market by seats, with more than a quarter more capacity than number two Italy. Spain's domestic market has also experienced fairly healthy growth over the past year and over the past five years, when compared with other leading European countries.

Unlike the international market, where Ryanair is the leading airline and airlines from outside Spain have a majority share of seats, Spain's domestic market is dominated by local operators. Spanish airlines have 84% of domestic seats, led by Vueling, Iberia and Air Europa. The two IAG airlines have a 58% seat share between them.

Iberia's capacity is unchanged this year whereas Vueling is growing, with a number of route launches and increased frequencies. The regional airline CanaryFly's capacity is also stable, while Norwegian is shrinking. Other leading airlines in domestic Spain are expanding this year, with the LCC Volotea being growing fastest.

According to CAPA analysis of data from OAG for the 52-week period to Sep-2019, Spain's domestic market has 51.4 million seats.

Among the top 10 Western European domestic markets, only Italy, Germany and Greece are growing faster this year and only Greece and Portugal have grown faster over the past five years (see chart below). 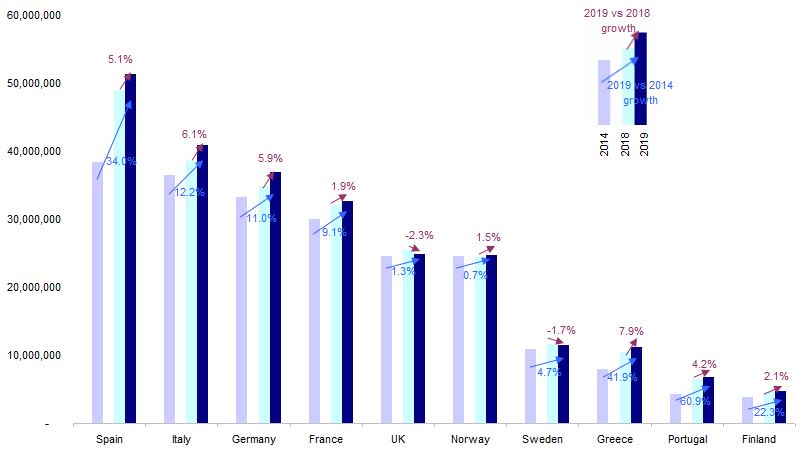 *52-week periods to Sep in each year.
Source: CAPA - Centre for Aviation, OAG.

…and Spain has shown steady growth since 2014

Spain's domestic market has enjoyed a steady increase in seat capacity in both winter and summer schedules since 2014. This has reversed a declining trend in 2012 and 2013.

That mini slump coincided with economic recession in Spain and was mainly the result of Spanair's bankruptcy in Jan-2012, NIKI's departure from the market in late 2011, and Islas Airways' Oct-2012 collapse. 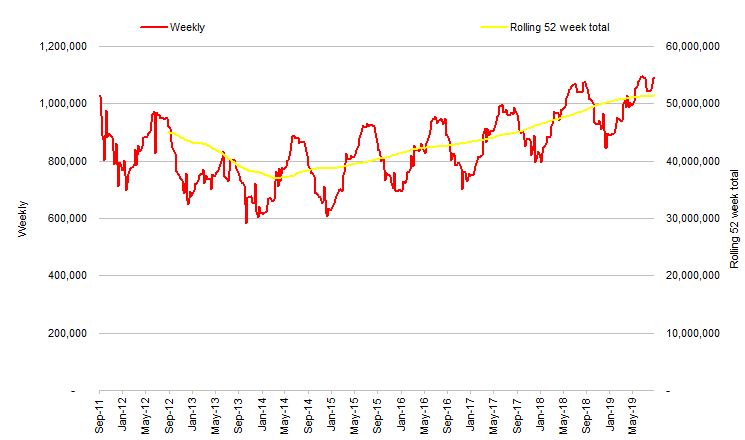 Vueling and Iberia lead domestic Spain; eight airlines have almost all the capacity

There are eight airlines in Spain's domestic market that operate 99.6% of seats between them. The top five have a 95.0% seat share.

Another Spanish airline, Air Europa, is third, with 15.0% of seats. Ryanair, the biggest airline overall in Spain, is only fourth in the domestic market, where it has 15.0% of seats.

Holding an 8.7% share in fifth place is BinterCanarias, the leading airline in the Canary Islands, with a fleet of ATR 72 turboprops and an order for three Embraer E2 regional jets.

Norwegian, CanaryFly and Volotea are also among the leading eight airlines.

Spain: leading airlines in the domestic market by seat capacity, 52 weeks to Sep-2019

LCCs have 48.0% of seats in domestic Spain in the year to Sep-2019, versus 42.0% five years earlier. Among the leading eight airlines, LCCs are represented by Vueling, Ryanair, Norwegian and Volotea.

This is lower than on international routes to/from Spain, where LCCs have had a seat share in the mid-50s percent for several years.

IAG's two airlines have more than half of domestic seats

From IAG's point of view, this just keeps the combined capacity of the group's two Spanish airlines significantly ahead of all other airlines in the domestic market.

IAG's share of domestic seats in Spain has been fairly stable since mid-2014. 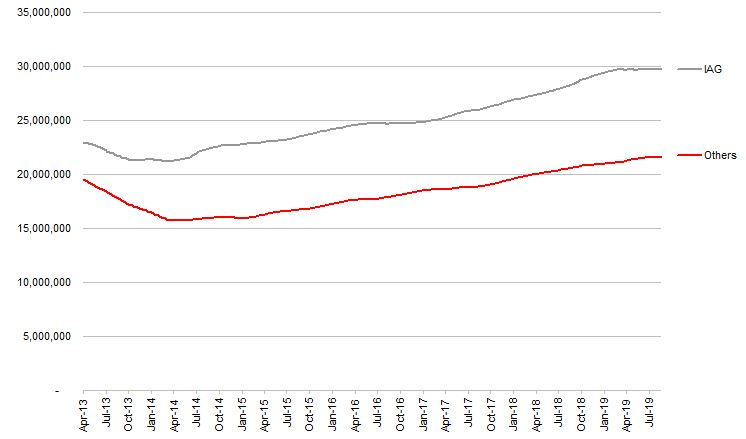 Note: IAG is Iberia and Vueling.
Vueling was acquired by IAG on 23-Apr-2013.
Source: CAPA - Centre for Aviation, OAG.

Iberia and CanaryFly's capacity is stable, whereas Norwegian's is shrinking

The slowing of capacity growth in domestic Spain 2019 to 5.1% (based on data for the 52 weeks to Sep-2019) reflects a levelling out by Iberia and CanaryFly and capacity cuts by Norwegian.

Seventh ranked CanaryFly, a regional airline operating turboprop equipment from Gran Canaria, is set to cut its capacity by 1.6% this year (after growing at 75% pa over the past five years).

Norwegian is number six in this market by seats, having entered domestic Spain only in Oct-2015, but is cutting capacity by a quarter this year. This reflects the closure of bases in Spain as part of a restructuring programme to restore profitability, continuing a downward trend in its capacity in the domestic market over the past couple of years. 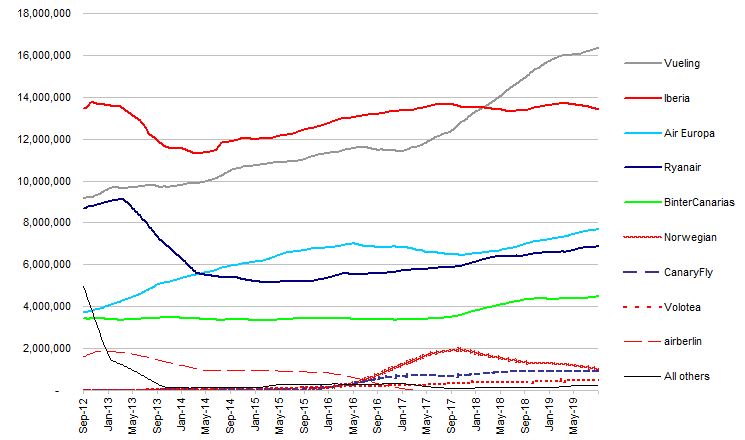 Other leading airlines are growing in the domestic market, led by Volotea

All other airlines in the top eight in Spain's domestic market are growing this year.

Eighth ranked Volotea is the fastest growing leading airline this year, increasing seat numbers by 18.8%, although this is a deceleration from its five-year CAGR of 39.4% pa.

Route launches this summer by Volotea include Asturias-Murcia and Bilbao to Alicante and A Coruña (the latter two in competition with Vueling).

Market leader Vueling is increasing capacity by 9.7% this year, consistent with its five-year average growth rate of 9.3% pa. It has a number of new routes between the Canary Islands and airports on the mainland.

Third placed Air Europa is growing at a similar rate this year, 9.9%, accelerating from its 5.3% pa five-year CAGR.

Ryanair is growing by 6.5% in domestic Spain this year. This is a little faster than its 4.9% pa CAGR over the past five years.

BinterCanarias is growing by 3.6% this year, compared with a five-year CAGR of 5.9% pa.

Airlines outside the leading group of eight airlines are outpacing overall market growth, with a collective increase in seats of 36.9% this year. However, they only have 0.4% of seats in the year to Sep-2019.

Airberlin's exit was more than offset by the growth of others

Airberlin was once the sixth biggest airline in the Spanish domestic market.

It left this market in May-2016 in one of its many unsuccessful attempts to restructure, some 17 months before its eventual bankruptcy. Its exit was more than offset by the growth of Norwegian, CanaryFly and then Vueling.

Spain is among Western Europe's top five countries by population but ranks only fifth by this measure. It has proved resilient to recession and the departure of fairly large airlines.

The pre-eminence of Spain's domestic aviation market is due to a number of factors.