Delta (-2.7%) stocks fell yesterday, as did Allegiant (-6.9%, again the biggest loser), and Alaska Air (-4.9%). GOL (-4.4%) and COPA (-3.0%) lost on more negative sentiment in southern parts. Only Canada’s Westjet (+4.1%) made a solid move upwards, as it announced its summer season routes and looked reasonably healthy. Otherwise the Dow took a late diversion downwards yesterday and oil prices threaten again on the high side, above USD60, airline stocks mostly languished.

The essentially inward looking US market largely ignored the Delta/Air France-KLM USD12 billion Joint Venture announcement, which helped send Air France-KLM stocks soaring on the other side of the North Atlantic. However, the market may have reacted negatively to Delta’s simultaneous announcement of drastic reductions on its full economy shuttle fares in the New York-Boston-Washington DC market. 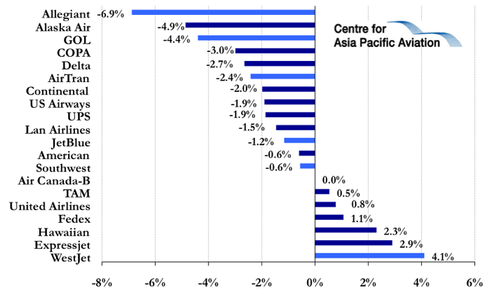 The JV, jointly announced yesterday will cover about 25% of total trans-Atlantic capacity with annual revenues estimated at more than USD12 billion. It is not a small matter.

As Richard Anderson, Delta Air Lines CEO noted: “The structure of this joint venture, in which we operate as a single business where we consensually develop our strategies and share revenues and costs, provides the incentives for us to collaborate in a way that generates benefits for customers, shareholders and employees of our three airlines. Customers will benefit from the unique scope and choices we will offer, while shareholders and employees will benefit from the stronger competitive and financial position of our respective airlines.”

Following is the announcement made by Delta yesterday:

The Air France KLM Group and Delta Air Lines (NYSE: DAL) today announced a new long-term joint venture whereby the partners will jointly operate their trans-Atlantic business by coordinating operations and sharing revenues and costs of their trans-Atlantic route network. The airlines will cooperate on routes between North America and Africa, the Middle East and India, as well as on flights between Europe and several countries in Latin America.

“This strategic partnership puts us in a good position compared with other major alliances, which are extremely active on the world’s leading long-haul market. By integrating our trans-Atlantic operations, we will give our passengers what they desire: more choice, more frequencies, more convenient flight schedules and superior customer service,” said Pierre-Henri Gourgeon, president and CEO of Air France KLM. “By optimizing the use of our pooled resources, this joint venture will help us weather the current economic situation and protect our product offering.”

Global passengers will benefit from access to a vast network offering over 200 flights and approximately 50,000 seats daily. That network is structured around six main hubs: Amsterdam, Atlanta, Detroit, Minneapolis, New York-JFK and Paris-CDG, together with Cincinnati, Lyon, Memphis and Salt Lake City. The airline partners will provide their corporate clients with a broad, global offering that best meets their expectations for the most convenient airline system, while providing efficient account management as well as ease of travel for their clients. Going forward, this structure will represent a major strength for the SkyTeam alliance, of which all three airlines are members.

“The structure of this joint venture, in which we operate as a single business where we consensually develop our strategies and share revenues and costs, provides the incentives for us to collaborate in a way that generates benefits for customers, shareholders and employees of our three airlines,” said Richard Anderson, CEO of Delta Air Lines. “Customers will benefit from the unique scope and choices we will offer, while shareholders and employees will benefit from the stronger competitive and financial position of our respective airlines.”

Peter Hartman, president and CEO of KLM, emphasized: “We know from experience that the success of a joint venture calls for shared vision and long-term commitment, the simplest of operating rules and fair sharing of revenues and costs. At KLM, we are proud to be starting to write a new page in our history alongside partners who fully share our exacting standards of quality and service. Today, we are building a team that will give its very best for trans-Atlantic passengers.”

Air France and KLM have been working with their respective American partners for many years. KLM signed a joint venture agreement with Northwest in 1997, while Air France and Delta signed a joint venture agreement in 2007. Following the merger of Delta and Northwest, the next logical business strategy was to establish a single trans-Atlantic joint venture. The agreement signed today is the result of that collaboration.
Included in the JV figures are results from trans-Atlantic services under the flight codes of all three airlines (AF, KL and DL codes), as well as the contribution from connecting flights beyond the hubs.

The joint venture’s geographic scope includes all flights between North America and Europe, between Amsterdam and India, and between North America and Tahiti. On these routes, the business will be jointly operated with the strategy and economics equally shared among the Air France KLM Group and Delta.
Wherever traffic rights permit, and notably between the United States and the European Union, flights will be mutually code-shared.

The joint venture will also step up the visibility of all three airlines in more than 400 airports: the Air France, KLM and Delta brands will be combined at all North American and European airports wherever any of the three carriers operates. Moreover, each partner will also support the three brands in advertising and marketing.

Governance of the joint venture will be equally shared between the Air France KLM Group and Delta. An executive committee comprising the three CEOs and a management committee comprising representatives from Marketing, Network, Sales, Alliances, Finance and Operations will define strategy. Ten working groups will be responsible for implementing and managing the agreement in the sectors of network, revenue management, sales, product, frequent flyer, advertising/brand, cargo, operations, IT and finance. The joint venture will not lead to the creation of a subsidiary.

The venture is a long-term, evergreen arrangement that can only be cancelled with a three year notice, after an initial term of 10 years.

Key facts and figures on the joint venture:

The following contains extracts from the text of WestJet’s announcement yesterday, 20-May-09:

As part of an enhanced summer schedule, WestJet today announced that it has launched seasonal non-stop service from Halifax to London, Ontario.

The schedule details of WestJet's new seasonal non-stop service, effective May 4, 2009, are as follows.

This announcement is part of WestJet's enhanced summer schedule, which also includes the addition of four new destinations: Sydney, N.S.,Yellowknife, San Diego and San Francisco, as well as increased frequency in its existing network. From Halifax, WestJet guests can fly or connect easily to Hamilton, Montréal, Calgary, St. John's and Toronto.