Delta continues to perform surgery on its Memphis hub

Delta Air Lines is continuing to slowly pare down its hub in Memphis, Tennessee as recent schedule changes show the carrier is cutting about 49 daily flights beginning Sep-2012 in markets largely operated with 50-seat regional jets. Delta has found a four-bank schedule at Memphis provided too much capacity, and is trimming it down to three banks.

Once the changes that are scheduled to start at the beginning of Sept-2012 are complete, Delta will serve four destinations from Memphis with just seven weekly flights: Cleveland, Ohio; Columbia and Springfield, Missouri; and Fort Smith, Arkansas. The cuts will also affect Milwaukee, Wisconsin; Omaha, Nebraska; and Philadelphia, Pennsylvania, which will have just 14 weekly flights each from Memphis. Delta deploys 50-seat jets in all those markets except Philadelphia, where the carrier operates 76-seat regional jets. 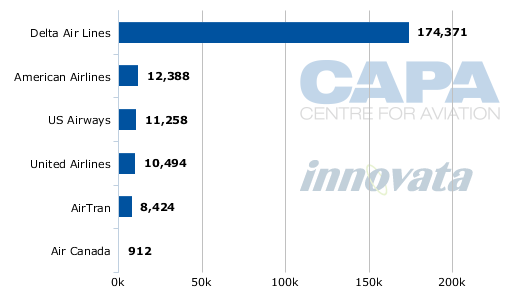 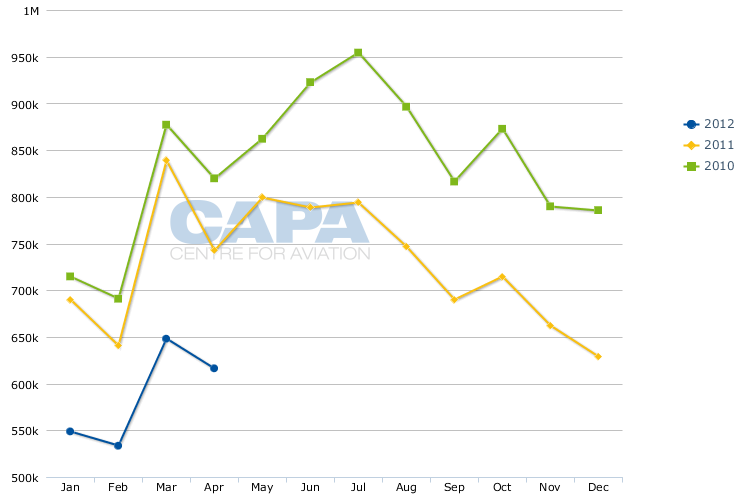 While at one point Memphis was touted as a reliever hub for some of Atlanta’s overflow traffic, with US domestic capacity shrinking it is likely that role for Memphis will diminish as US legacy carriers continue to cut unprofitable operations from their networks. Delta has also reached a tentative agreement with its pilots that would enable the carrier to significantly reduce the number of 50-seat jets it currently operates, which could also be a troubling sign for spoke communities served from Memphis. Delta’s only long-haul trans-Atlantic service from Memphis to Amsterdam is also feeling the squeeze as the carrier plans to transition the service to a seasonal offering in an effort to keep the recent improvement in its trans-Atlantic performance steady. With diminished domestic feed for the Amsterdam service, it is unsurprising the flight is being made seasonal.

As it continues to “right size” Memphis, Delta will enjoy significant pricing traction in the market as it exploits the upside of supply and demand. The latest data from the US Department of Transportation (DoT) show that Memphis during 4Q2011 ranked third among the top 100 US airports based on the highest average fares. The average USD484 fare for flights from Memphis was USD116 higher than the US average domestic fare of USD386. The top five airports featuring the highest fares are either hubs for Delta or United, which merged with Continental in 2010. That bodes well for consolidation from an airline business perspective, but saddles consumers with higher fares. DoT’s average USD386 domestic fare estimate was a 10% year-over-year increase.

US airports with the highest domestic fares: 4Q2011

Memphis, meanwhile, will continue to serve as one of Delta’s smaller hubs as carrier CEO Richard Anderson a few weeks ago told the local Memphis newspaper The Commercial Appeal that Memphis has an “enviable” amount of service. He explained Delta has tried a four-bank structure at the airport, but ultimately reverted back to three daily flight banks comprised of 50 flights each. Attempting to ease concern over the continuing cuts Mr Anderson assured: “We still have a hub here”. But Memphis still remains vulnerable as Delta, similar to other carriers, seeks to house its flying at its most profitable hubs.