Delta Air Lines reported a net profit of USD593 million for the 12-months to 31-Dec-2010, compared with a loss of USD1237 million in 2009. The President of the airline, Ed Bastian, said that the carrier’s positive momentum from 2010 should see it maintain its March quarter margins, despite more than USD350 million in extra costs from higher oil prices.

Delta’s 4Q2010 result was positive, with a net profit of USD19 million. Revenue climbed 14% in the quarter, to USD7.8 billion, while costs were up 9%, to USD7.5 billion, most of it due to a 13% increase in fuel costs. Delta expects that industry-wide fare increases, combined with growth in the carrier’s ancillary products and services, will provide a more long-term, revenue-based solution to addressing the high fuel environment.

See Perspective for analysis of Delta: Delta's fleet strategy under scrutiny after RFP on narrowbodies

Shares in Delta Air Lines were down 8.2% yesterday. Despite the positive result, the airline missed its earnings forecast and were lower than analysts expectations. Shares in other US-based carriers also took a hit, with Republic down 6.6%, US Airways down 6.2% and American Airlines 3.9%.

There was better momentum for airline shares in Latin America. LAN Airlines and Copa Airlines were both down 0.4%, while TAM gained 0.2% and GOL was up 0.3%. 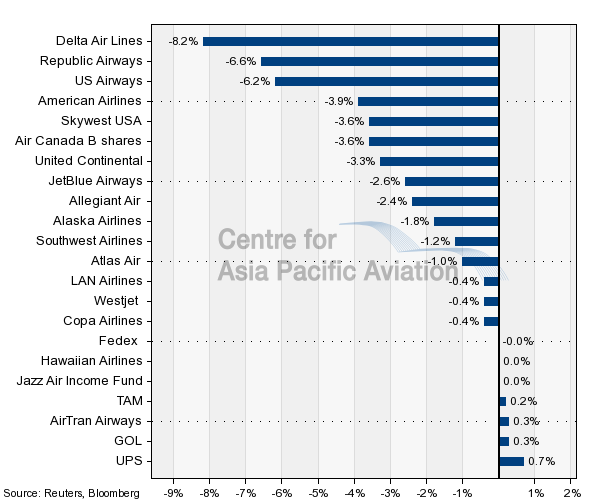