The majority of North and South American carriers stocks were down on Tuesday (26-Jan-2010), moving with the wider market. The Dow was flat as investors became cautious of major political and regulatory developments to be announced later this week, overshadowing a third consecutive improvement in US consumer confidence. Meanwhile, oil prices (+0.7%) were up, to USD74.71. The AMEX Airline Index (-1.5%) was pushed lower as a result.

CEO, Richard Anderson, was upbeat, stating, "2009 was one of the most difficult years [for the] airline industry and we are glad it is behind us. While we are disappointed to report a loss, we are encouraged that revenue and demand trends improved throughout the quarter…As a result of the strategic pieces we put in place in 2009 and the strong momentum of our merger integration, Delta is now positioned to capitalise on the economic recovery under way and expects to generate positive RASM improvements each month of this year".

The carrier added it now expects to see revenue per ASM (RASM) improve in each month of 2010. For FY2009, the carrier witnessed a 14.3% year-on-year drop in passenger revenue per ASM (PRASM), to USD 10.34 cents. See related report: Delta Air Lines in dramatic loss swing

For further news on Delta Air Lines’ and LAN’s results, as well as other news from across the Americas, please see America Airline Daily. 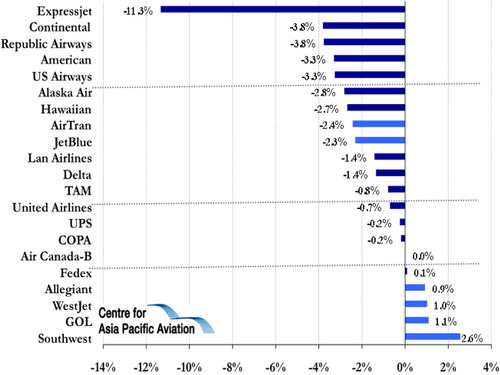