The US Energy Department's Energy Information Administration (EIA) reported this week that US oil consumption continues to ease, falling 1.8% year-on-year over the past four weeks. The EIA stated that aviation jet fuel demand is falling in the US.

However, outside North America, consumption of jet fuel is soaring. Brazil’s state-run oil firm, Petroleo Brasileiro, reported record monthly consumption of aviation fuel in Dec-2009, mostly from soaring traffic due to the strong expansion of local LCCs. Aviation fuel consumption in the Indian Subcontinent is also on the rise, with year-on-year increases of more than 30% reported in both India and Pakistan over late 2009.

The increase in consumption and the late 2009 surge in oil prices prompted Indian state-owned oil companies to increase aviation fuel prices by 6.5% at the beginning of this week.

Oil retreats back below USD80

Crude oil prices dipped back under the USD80 per barrel mark this week, with the price dropping 4.2% over the week. US fuel stocks are declining, but prices are also falling in line with lower consumption and more idle refinery capacity. 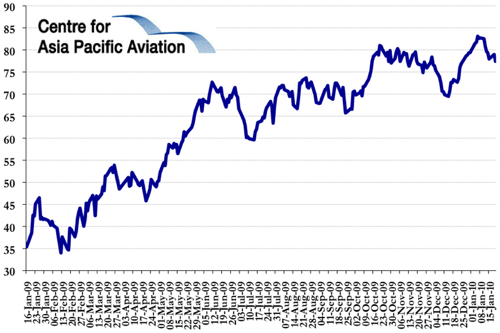 Jet fuel pries were also lower, with New York Harbour and US Gold Coast prices down 5.2% each, while Los Angeles prices dipped 5.5% in the week to 21-Jan-2010. Amsterdam exchange prices were down 2.7%, while Singapore prices fell 4.9%. 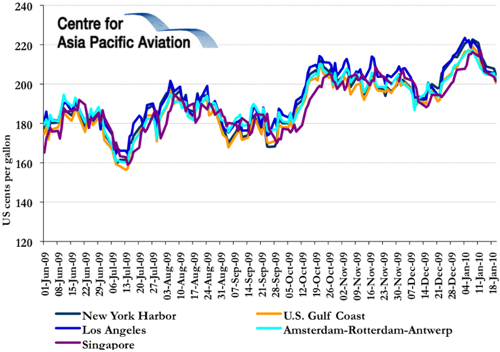