Ryanair CEO Michael O'Leary has summarised the priority for his airline, which applies equally to all airlines currently: to preserve cash.

"If we have to operate for three, six, nine, maybe even 12 months, with no flights and no revenues how do we survive?", he said (Financial Times/Reuters, 21-Mar-2020).

The main tool at airlines' disposal for preserving cash is to make drastic cuts to capacity.

Total seat capacity in Europe has dropped by 59.1% year-on-year for the week commencing 23-Mar-2020, according to the latest schedules data from OAG combined with CAPA Fleet Database seat configurations. Domestic capacity has almost halved, reduced by 48.3%, and international capacity has been slashed by 62.9%.

Italy has the biggest percentage cut – reduced by 87.5% year-on-year – while Finland, Spain, Germany, Denmark, Greece and Belgium are also shrinking capacity by more than 70%. Of Europe's top 20 airline groups, 18 are showing cuts, and most of them very substantial.

However, data for some still do not appear to reflect full details of some recent announcements. The rate of reduction is certain to increase. At some point, zero capacity could even become a reality for European aviation.

Total European seat capacity is scheduled to be 11.7 million in the week of 23-Mar-2020, compared with 28.6 million a year ago. This comprises 3.8 million domestic seats, versus 7.4 million last year; and 7.9 million international seats, versus 21.2 million.

It turned negative in the week of 13-Jan-2020, before the virus impact became significant, but the fall in capacity remained less than 2% until the week of 9-Mar-2020. 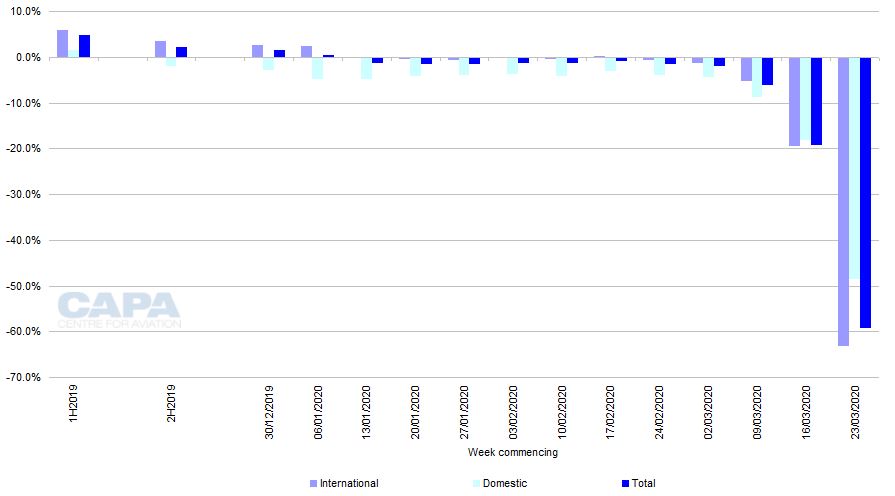 Italy has biggest percentage capacity cut, down almost 90%. Russia has smallest, among Europe's top 20 countries, at 13%

All of Europe's top 20 countries (ranked by total seat capacity for the equivalent week a year ago, i.e. commencing 25-Mar-2019) recorded heavy reductions this week. The total cut for the top 20 countries in aggregate is 60.8%, a little more than the 59.1% cut for Europe as a whole. 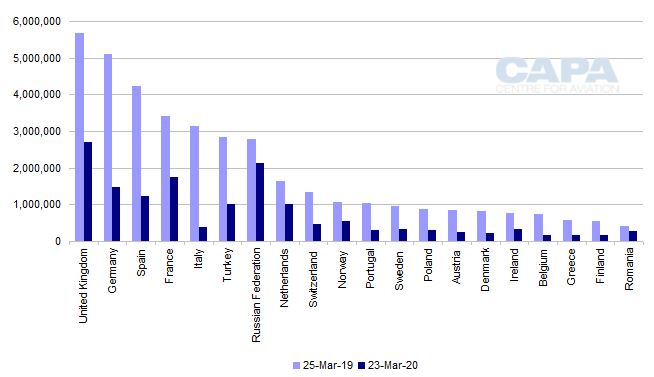 Among the top 20 countries, Italy has the biggest year-on-year percentage capacity cut scheduled this week, with an 87.5% reduction.

Six other top 20 countries have cuts of more than 70% (Belgium, Greece, Denmark, Germany, Spain and Finland). Six are undergoing cuts of between 60% and 70% (Poland, Turkey, Sweden, Switzerland, Portugal and Austria).

A further six are cutting seat count by between 30% and 60% (Romania, Netherlands, France, Norway, UK and Ireland). The smallest cut in percentage terms is in Russia, where capacity has fallen by 23.9%. 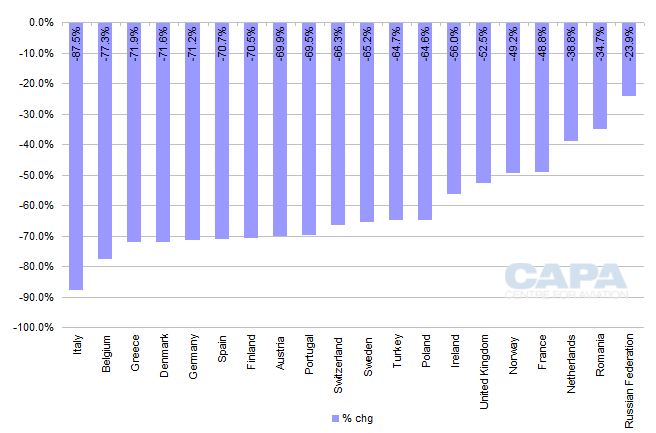 Airlines have been announcing ever greater capacity cut plans

Although these cuts are vast and without precedent, the full impact of recent airline announcements does not yet appear to be fully reflected in the OAG schedules data for the week of 23-Mar-2020. This may be partly due to some inherent lags in the system of filing the data, but also the result of some flights to bring customers back from international destinations that remain in service for now.

Even during last week (the week commencing 16-Mar-2020) most European airline groups, including all the larger ones, had already announced capacity cuts of 75% to 90% from late Mar-2020.

In recent days a number of European airlines have announced even deeper cuts, or at least confirmed cuts at the lower end of previously expressed ranges.

EasyJet will ground the majority of its fleet from 24-Mar-2020. It will operate a minimal schedule of essential services on some routes, with a maximum of 10% of usual capacity, mainly on routes to/from/within the UK.

Ryanair is operating a severely reduced schedule from 25-Mar-2020. Mr O'Leary said he and his employees will undergo a 50% pay reduction and the company is operating on a best case scenario of two to three months of grounded services, however "honestly none of us have any idea".

Turkish Airlines is to suspend most international services from 27-Apr-2020, retaining only New York, Washington, Hong Kong, Moscow and Addis Ababa. It will continue with domestic services, but at reduced frequencies.

Nevertheless, although the OAG schedules data may still be lagging behind recent announcements, the leading airline groups in Europe are still showing very substantial reductions in seat count this week, based on OAG/CAPA data.

The following chart shows seat capacity for this week and for the same week a year ago for Europe's top 20 airline groups.

Note that they are displayed in the order of their 2019 total passenger numbers, rather than their seat numbers for this week, since seasonal fluctuations and load factor differences distort the ranking for any given week.

A glance at the chart highlights the number of top 20 groups with big capacity cuts. Only Jet2.com and Wizz Air are recorded as increasing their capacity year-on-year, while 18 of the top 20 are shrinking. 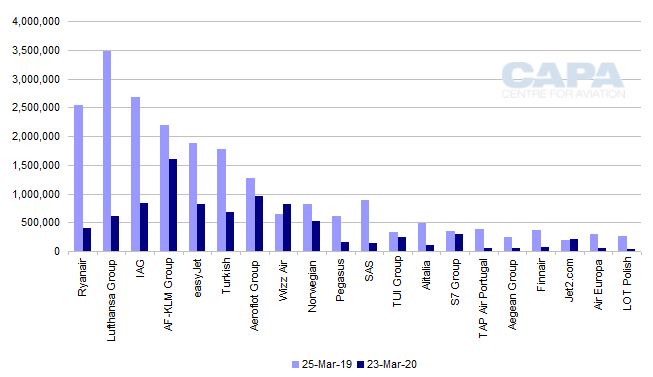 The total cut for the top 20 European airline groups in aggregate is 60.0%, close to the 59.1% cut for Europe as a whole. Ten groups are displaying cuts of more than 70%.

In percentage terms, the biggest cut among the top 20 groups currently showing in the OAG/CAPA data for the week of 23-Mar-2020 is TAP Air Portugal, with a cut of 85.3% year-on-year.

There are seven others cutting by more than 80% (Finnair, Alitalia, Aegean Airlines Group, Lufthansa Group, LOT Polish, Ryanair and SAS).

Air Europa and Pegasus have cuts of more than 70%; Turkish Airlines and IAG more than 60%. EasyJet is currently shown with a 57% cut, although this does not fully reflect recent announcements. 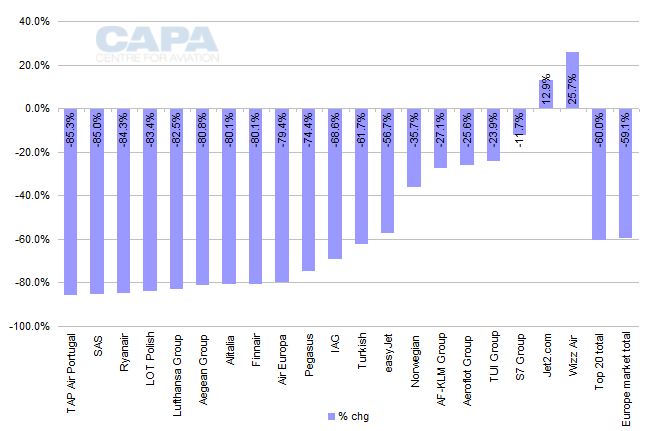 Norwegian's cut for the week is recorded as 35.7%, but this does not reflect an announcement last week that it would cancel 85% of its flights.

Similarly, the 27.1% cut in seats for Air France-KLM does not seem to reflect its announcement last week of 70% to 90% cuts in ASKs (even after allowing for differences between seat numbers and ASKs).

Aeroflot is displayed with a 25.6% cut, which is the lowest percentage reduction among the very largest European groups (it ranks number seven by 2019 passengers). Russia's number two group (and number 14 in Europe), S7 Airlines, shows a cut of 11.7%.

TUI Group's recorded cut of 23.9% looks understated, given last week's announcement that it planned to suspend the "vast majority" of its operations. This may reflect ongoing flights to bring holiday customers back to their home countries.

Jet2.com and Wizz Air are showing seat growth, but this may not be fully reliable

Jet2.com is still recording a capacity increase of 12.9% in the OAG/CAPA data. It said last week that it had suspended all operations departing the UK until 1-May-2020, while continuing its schedule to bring passengers back to the UK.

In reality, this means flying empty aircraft outbound, but these seats are presumably still showing in the data.

Wizz Air is shown with a 25.7% year-on-year increase in seat count this week, apparently continuing its previous growth rate. However, this is not reliable.

Zero capacity could even become a reality

A week ago, total seat capacity for the current week was expected to be down by 19.6% year-on-year. The acceleration to a 59.1% cut in a matter of days is unprecedented, and reflects the rapid response of European airlines to the dramatic evaporation of demand.

Data on demand, as demonstrated by passenger numbers, are not available until the end of the month or quarter (depending on the airline reporting), but demand has fallen even more drastically than capacity.

Moreover, in spite of the rapid acceleration in the capacity cut in Europe, it seems likely that even the currently indicated cut of 59.1% will be exceeded this week.

It will certainly be exceeded in future weeks, with at least some possibility of capacity temporarily not much above zero.