Continental and United Airlines merger cleared in the US

North and South American airline shares soared on Friday (27-Aug-2010) after US Federal Reserve Chairman, Ben Bernanke, promised to take action, if required, to safeguard the country’s economic recovery. Airline shares were also boosted by news the United Airlines and Continental Airlines merger plans have been cleared by the US Department of Justice.

Continental and United Airlines merger cleared in the US

Continental Airlines (+4.2%) and United Airlines (+4.1%) rose on the news they received notification from the Antitrust Division of the US Department of Justice (DoJ) of the completion of its Hart-Scott-Rodino Act review and the closing of its investigation of the airlines' pending merger.

The carriers announced an all-stock merger of equals on 03-May-2010, and expect the transaction to close by 01-Oct-2010. Both companies have scheduled special stockholder meetings on 17-Sep-2010, for approval of the merger. United and Continental received clearance from the European Commission for the proposed merger in Jul-2010, which noted its investigation found the transaction would not raise competitive concerns in Europe or on trans-Atlantic routes.

US Department of Justice stated that in light of the agreement by United and Continental to transfer take-off and landing rights slots and other assets at Newark Liberty Airport to Southwest Airlines (+2.9%), it has closed its investigation into the proposed merger.

United and Continental agreed to lease 18 pairs of take-off and landing slots to Southwest during peak and off-peak travel times at Newark Liberty International Airport.  The leasing of the first of the 18 daily slot pairs will begin in late Mar-2011 and the leasing arrangement will be fully implemented in Jun-2011. Continental and United operate 442 daily round-trip flights into and out of Newark Liberty. The lease deal is contingent upon the closing of the Continental and United merger by 30-Nov-2010, and certain governmental approvals. The slots are spread throughout the day and would allow Southwest to integrate Newark into its national route network.

Elsewhere, GOL (+6.3%) and US Airways (+5.9%) were the day’s biggest gainers, while JetBlue was the only carrier not to rise for the day, ending trading flat. 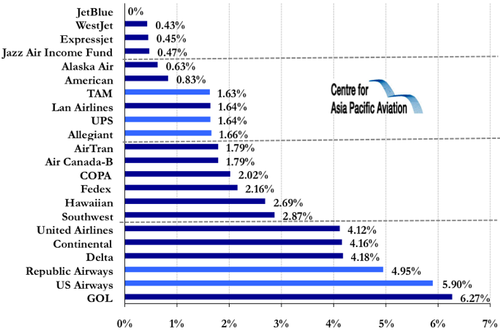